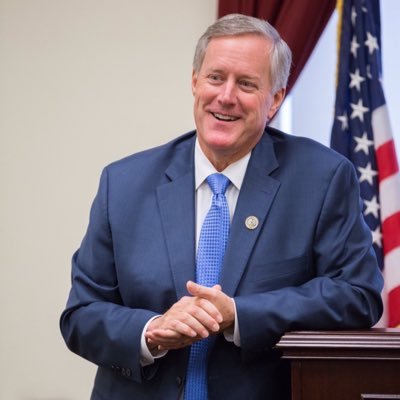 White House chief of staff Mark Meadows said Wednesday that the administration is eyeing executive action to prevent airline furloughs in absence of a deal with Congress on new coronavirus relief legislation.

Meadows’ comments in a Politico Live event came a day after American Airlines said it would furlough or lay off some 19,000 workers starting in October unless the federal government steps in with billions more in relief for struggling airlines.

“I think everybody every time they hear that we’re going to do executive actions they don’t believe me,” Meadows said. “We’ve got four executive actions that actually the president took, we’re going to take a few others. Because if Congress is not going to work, this president is going to get to work and solve some problems. So hopefully we can help out the airlines and keep some of those employees from being furloughed.”

It was unclear how the administration could act on its own to extend aid to airlines or take steps that would prevent furloughs. Meadows did not elaborate and the Treasury Department did not immediately respond to requests for comments.

Congress passed the Cares Act in March, which devoted more than $50 billion in grants and loans to the airline industry. As a condition of $25 billion in grant money, they had to agree to keep workers on the job through Sept. 30.

The coronavirus pandemic has caused airline travel to fall sharply decimated revenue. That travel has recovered somewhat from very low points in March and April, but it still hasn’t come back to its pre-pandemic levels.

Congress and the administration agreed on four bipartisan bills in March and April that pumped some $3 trillion into the economy. A new round of negotiations started up in July between congressional Democrats and the administration, but multiple meetings and hours of talks failed to produce a result, and the House and Senate adjourned without action.

Meanwhile, many of the programs authorized in the Cares Act and other legislation in the spring have expired or will do so soon, including a moratorium on evictions and $600 weekly emergency federal unemployment benefits that ran out July 31 for some 30 million jobless Americans. The small business Paycheck Protection Program stopped accepting new grant applications.

Senate Republicans have begun discussing narrower legislation that would revive some of these programs, while sending billions to schools, investing more in testing and tracing, and establishing a liability shield for businesses and others that is a priority for Senate Majority Leader Mitch McConnell, R-Ky.

Senate Republicans have been convening daily conference calls aimed at trying to reach consensus on a bill they could potentially end up trying to attach to stopgap legislation to keep the government open when funding for agency operations expires Sept. 30. That deadline will force legislative action of some kind.

Meadows, who was leading negotiations for the administration along with Treasury Secretary Steven Mnuchin, said Wednesday he hadn’t spoken with House Speaker Nancy Pelosi, D-Calif., or Senate Minority Leader Charles Schumer, D-N.Y., since talks broke down earlier this month.

Meadows said his staff had reached out to Pelosi’s staff on Tuesday to potentially restart talks. But Pelosi’s spokesman, Drew Hammill, said there was only an exchange of text messages and no actual discussion of more talks.

“I’m not optimistic,” Meadows said. “I think the speaker is going to hold out until the end of September and try to get what she wants in the funding for the government during the CR or whatever funding mechanism happens to come up at the end of September.”

By “CR” Meadows was referring to a “continuing resolution” that would extend government spending at existing levels through the election. That is widely viewed as the likeliest outcome for keeping the government funded past the end of the fiscal year on Sept. 30.

“Democrats have compromised in these negotiations,” Hammill said in response to Meadows’s comments. “We offered to come down $1 trillion if the White House would come up $1 trillion. We welcome the White House back to the negotiating table but they must meet us halfway.”

However, the impact of the steps has been limited, with businesses announcing they would continue collecting payroll taxes and states moving slowly to enact the new $300 weekly unemployment payments, which are supposed to come from a disaster fund maintained by the Federal Emergency Management Agency.

It’s been unclear what additional executive actions the administration might try to take. Meadows’s comments Wednesday mentioning airlines were the first public indication of what they might be trying to target.

Meadows said he had spoken with officials at United, Delta and American.

Trebor Banstetter, a spokesman for Delta Air Lines, said while the company could not comment on any discussions with the White House, Delta chief executive Ed Bastian has publicly supported a “clean extension” of the Cares Act.

Unions have largely led the campaign for an extension of the law’s payroll support program, however, and voiced support for congressional action.