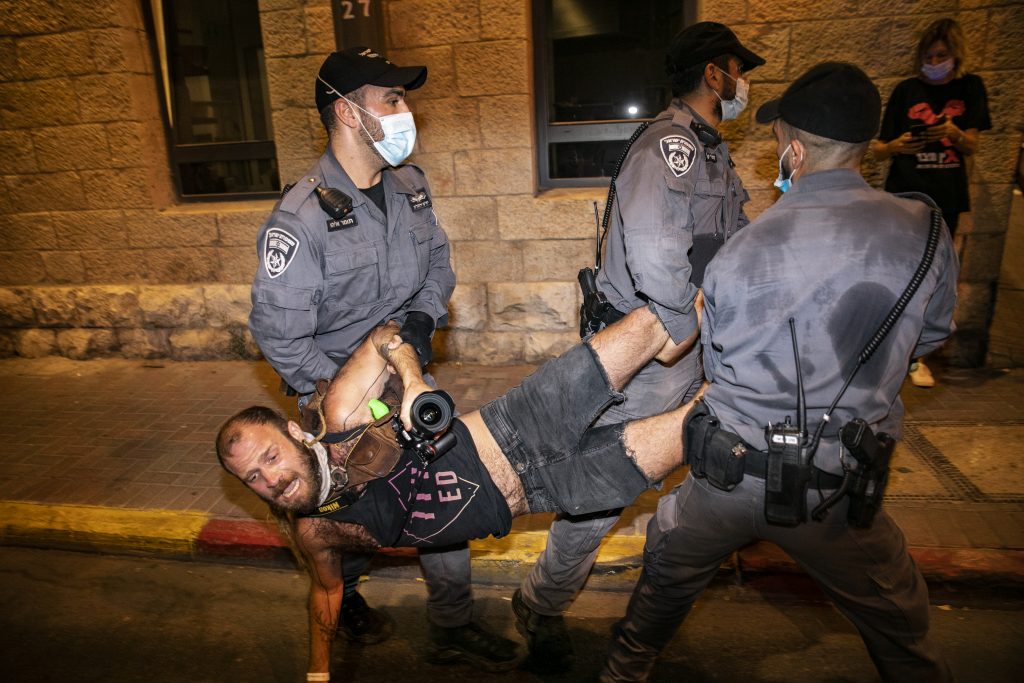 Anti-Netanyahu protesters have won the backing of state prosecutors, who have issued a directive to police not to interfere with the ongoing nighttime demonstrations at the in Yerushalayim, including recognizing a right to block roads.

The Likud responded sharply in a statement, saying “the right to demonstrate does not include the right to block roads and violate police instructions. This is not what the rule of law and democracy looks like, but rather violent anarchy. It seems everything is kosher when it comes to an attempt to bring down Prime Minister Netanyahu,” Ynet reported.

However, the ruling did not give the protesters unrestrained right to act as they please. Legal officials said protesters should not be placed on trial for illegal gatherings or disturbances (which seems to imply the can be detained); and charges should not be filed for blocking traffic, unless it’s a main thoroughfare and the protest action lasts a long time.

Knesset Speaker Yariv Levin (Likud) was scathing in his comments:

“For years, the top echelons of the justice system and the State Attorney’s Office have blindly followed in the path of retired Supreme Court President Aharon Barak. Today, it turns out that their hatred of Prime Minister Netanyahu is even stronger than their childish admiration for Barak,” Levin wrote online Wednesday.

“When Rabin was prime minister, Aharon Barak ruled that demonstrations would be attended by a maximum of 500 people and only until nine in the evening. Today, during the coronavirus crisis, who would have believed that the State Attorney’s Office would allow a deviation from this ruling? But the office ‘suddenly’ decided to reject Aharon Barak’s ruling.

‘Suddenly,’ protests are allowed without limit, whether numerically or otherwise, both at the cost of risking the health of us all, and at the cost of blocking roads and preventing ambulances from reaching hospitals. Everything is allowed. The main thing is that the agenda of hatred towards Prime Minister Netanyahu could be allowed to run wild in the streets.”

“If anyone had any doubts about what motivates senior officials in the State Attorney’s Office, he received a clear answer today. All the resources, all the enormous power in their hands, everything is routed to selective enforcement in order to overthrow an elected prime minister. All those who value democracy, whether on the right or the left, must protest in the face of this blatant discrimination and disgraceful conduct,” Levin concluded.

In response to complaints from local residents and Netanyahu supporters, police have attempted to put an 11 p.m. limit on the demonstrations, which have been loud and boisterous. Many of the clashes between police and demonstrators occurred after the curfew when the latter refused to disperse peacefully.