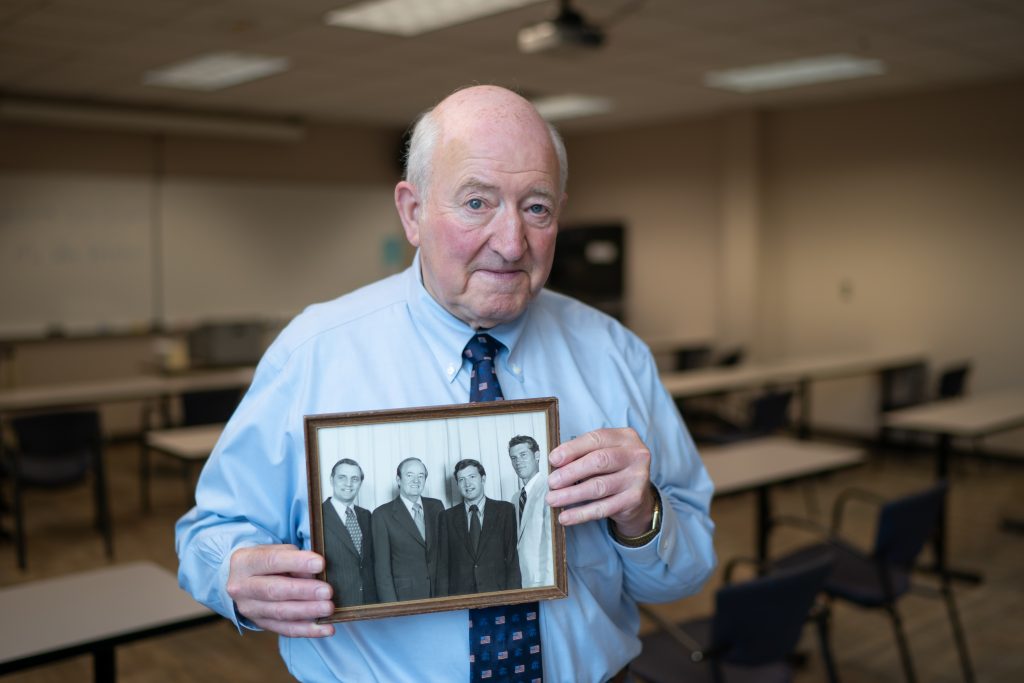 But this week he is supporting President Donald Trump as a delegate to the virtual Republican National Convention. Wenzel, a politics professor at Central Lakes College in Brainerd, said the Democratic Party has “drifted leftward to the point where I can’t even recognize it.”

This time, he is firmly in the Trump camp. While the president’s poll numbers have dropped during a summer marked by the pandemic and racial tensions, Wenzel believes support for Trump’s re-election has solidified in rural farming communities and in northern Minnesota, historically a DFL stronghold.

“The president has done everything he said he would do,” Wenzel said. He said the Democratic Party used to represent labor and working people but now focuses on regulations and environmentalism.

Vice President Mike Pence will visit Duluth on Friday for a “Workers for Trump” event at the Port Authority. Both Pence and Trump have held events in Duluth over the past couple of years.

Democrats are drumming up support for their candidates through calls, texts and digital applications rather than in-person events. Their contact with voters has increased compared with before the coronavirus, particularly in greater Minnesota, said state DFL Party Chairman Ken Martin. He painted a different picture of the Trump presidency than did Wenzel. The president has fallen short of many of his 2016 campaign promises, Martin said, noting that unemployment has hit record highs during the pandemic and Trump has failed to show leadership in taking on COVID-19.

Martin said the big question for voters is: “Who do you trust more to rebuild? … I think it’s going to be really hard for [Trump] to convince folks in northern Minnesota that what they are doing actually works for them.”

Martin said governors like Minnesota DFL’er Tim Walz have provided a steady hand in responding to the crisis.

But Roger Heger, a GOP convention delegate from Bemidji, said Walz has disappointed some voters there. He disagreed with Walz’s closures of schools and businesses during the COVID-19 pandemic, as well as his delay in sending in the National Guard to respond to widespread looting and arson in the Twin Cities after George Floyd’s death. Some in the region also are upset that his administration is appealing a regulatory approval of Enbridge’s replacement of the deteriorating Line 3 oil pipeline, he said.

“These are well-paying union jobs that the governor just turned down,” Heger said of Line 3. “I can’t see that being a big benefit for the Democrats that are trying to run in northern Minnesota.”

Chad Landry, who manages a roadside stand in Royalton selling Trump-related merchandise, said judging by his sales, support for the president is high in rural Minnesota. “We want to turn Minnesota completely red,” said Landry, who said there are at least two dozen of the “Trump Shops” around the state, from Alexandria and Forest Lake to Baxter and Bemidji. Over the past weekend, he estimated that he sold $16,000 in T-shirts, flags and other memorabilia.

Emily Nygren, DFL chairwoman of the Eighth Congressional District that encompasses much of northern Minnesota, pointed to a different set of numbers as an encouraging sign for Democratic turnout in November. Quinn Nystrom, the DFL challenger to GOP Eighth District Rep. Pete Stauber, ran uncontested in the primary. Nonetheless, 46,050 people cast ballots for her compared to 39,060 for Stauber, who flipped the seat in 2018.

Ron Britton, chairman of the St. Louis County Republican Party in the heart of the Eighth District, predicts more people in his community will support Trump than in 2016. He has been involved in the GOP since the 1970s. He said he used to work with Democrats on gun bills but has seen a shift in elected officials’ stances on that and other issues.

“I see a big change,” Britton, of Virginia, said. “The people believe the same thing, but the politicians don’t.”