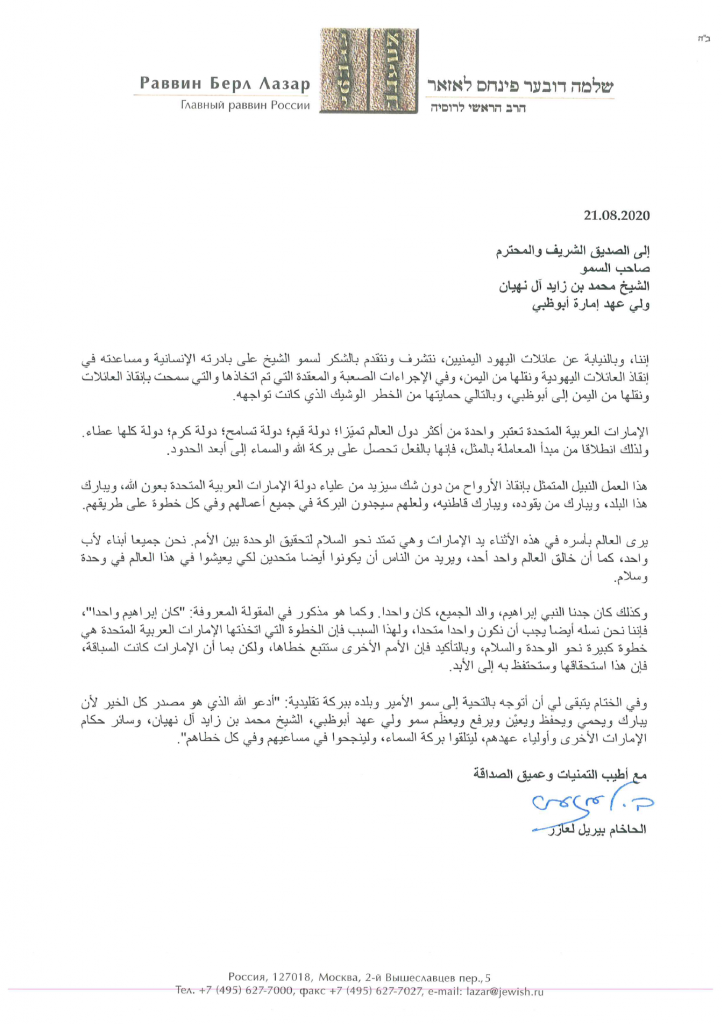 While the historic agreement between Israel and the UAE continues to make headlines around the world, meanwhile, far from the spotlight, the UAE has been involved in an extraordinary humanitarian gesture to rescue Jews from Yemen during the past week. Through the direct assistance of the Crown Prince of the United Arab Emirates, Muhammed bin Zayed Al Nahyan, with whom the peace agreement with Israel was signed, a Jewish family from Yemen was rescued after their life was in danger. The family members arrived safely in Abu Dhabi, where they were reunited with their relatives who had emigrated to London in recent years.

As the situation in Yemen tightened for Jews in recent years, there were many efforts to rescue those Jews who still remained there. Yet there were a number of families who refused to leave the country for various reasons, among them their hesitation to leave elderly parents behind. In some cases, Jewish organizations rescued the children and transferred them to other countries.

Such was the situation with one of the oldest families in Yemen. The parents themselves did not emigrate, but their children had all left Yemen about 15 years ago, and in recent years, the entire family had settled in London, with only the parents left behind.

Lately, after extremist groups took over areas of the country, the situation for the local Jews, whose numbers have been dwindling as it is, has become unbearable and extremely dangerous. Recently, it became clear to the family members in London that there is grave concern for the fate of their loved ones, and they began rescue operations to get their parents out of the dire circumstances. Senior activists began international rescue operations to get the Jewish family out. Among other things, there was a need for an allied country with Yemen to sponsor and even grant entry visas.

Russia’s Chief Rabbi Berel Lazar was enlisted into the campaign, and he exerted his influence on Prince Muhammed bin Zayen al Nahyan, the Crown Prince of Abu Dhabi, to get into the thick of things and assist in the humanitarian operation.

Indeed, in an extraordinary gesture of goodwill, the local authorities in Abu Dhabi granted citizenship to members of the Jewish family from Yemen, and even took part in the rescue itself. Details cannot be disclosed for obvious reasons.

Additionally, in an unusual and unprecedented move, citizenship was also granted to the other family members currently living in London, so that they could come to Abu Dhabi and reunite with their parents whom they haven’t see for the past 15 years.

The reunion was both exciting and very emotional. Family members fell on each other’s shoulders, and thanked G-d for saving their parents from a real life-threatening situation. They also expressed their appreciation to Crown Prince Muhammed bin Zayed al Nahyan, as well as to Rabbi Berel Lazar, and to all those who selflessly worked day and night to make this operation successful.

Rabbi Lazar, who enlisted the assistance of the Prince, sent him a special letter of thanks, which read, among other things: “On behalf of the Yemenite Jews and their families, we are privileged to thank His Royal Honor for the humanitarian gesture and the assistance that the Prince provided in granting entry visas to the families of the Yemenite Jews, so that they can be rescued from Yemen to Abu Dhabi, thus saving their lives from danger.

“The United Arab Emirates is one of the most unique countries on earth. A country with values, a country with tolerance, a county with generosity, a country that is very giving. Therefore it receives G-d’s blessings to such an extent. This noble act of saving lives will, with the help of G-d, further raise the United Arab Emirates, bless the country, bless its leaders, bless its inhabitants, and they will see G-d’s blessings in all their deeds, every step of the way.”

Rabbi Lazar also referred to the peace agreement reached last week between the UAE and Israel: “These days the entire world sees the hand of the UAE extended in peace, desiring to bring about unity between peoples. The move made by the UAE is a big step towards peace and unity. Others may follow suit, but she will forever remain the first.”

Meanwhile, according to recent publications, the handful of Yemenite Jews who still remain there are also seeking to emigrate to the United Arab Emirates.