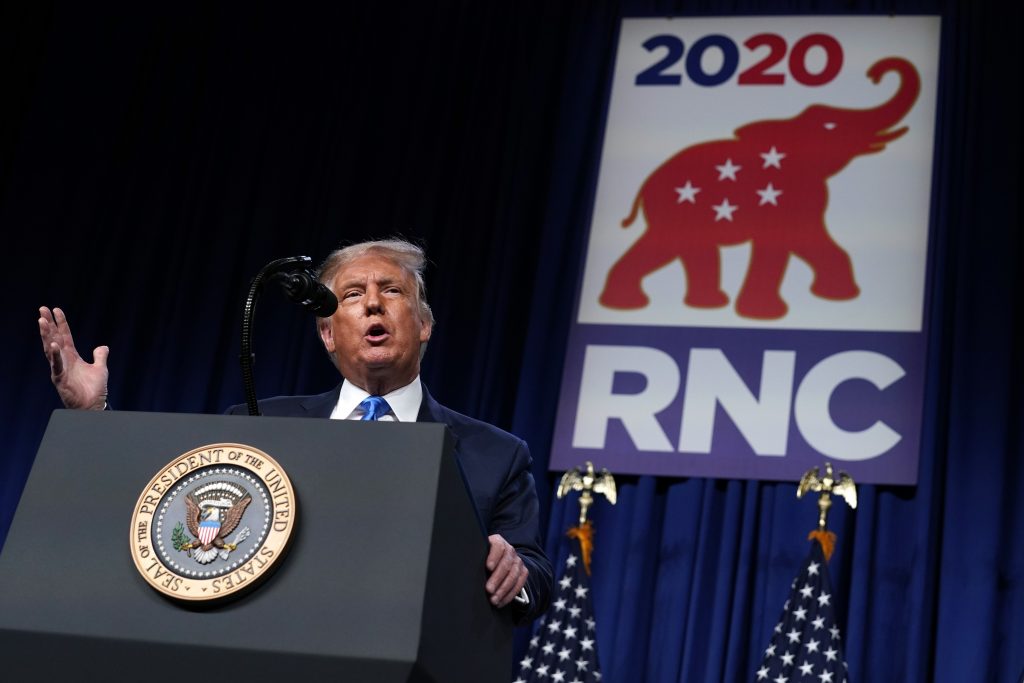 President Donald Trump turned a surprise opening-day appearance at his party’s scaled-down national convention into an opportunity to question the integrity of the election, while as his aides promised a diverse and uplifting message once the evening program shifted back to Washington, D.C. for prime time.

Trump, who was not scheduled to deliver his keynote convention address until later in the week, nevertheless made multiple public appearances throughout the first day of the four-day convention. And while the evening programming was carefully scripted, Trump was not.

“The only way they can take this election away from us is if this is a rigged election,” Trump told hundreds of Republican delegates gathered in North Carolina, raising anew his concerns about Americans’ expected reliance on mail voting during the pandemic.

Convention organizers are featuring a diverse lineup with a more inclusive message designed to expand Trump’s political coalition beyond his white, working-class base.

Like the Democrats the week before, the program also included a collection of average Americans: a public school teacher from California, a small business owner from Montana and a nurse practitioner from Virginia. One of several African Americans on the schedule, Georgia state Rep. Vernon Jones, was expected to explain why he split from fellow Democrats and announced his support for Trump this year.

Trump said he had made the trip to North Carolina to contrast himself with his Democratic rival, Joe Biden, who never traveled to Wisconsin, the state where the Democratic convention was originally supposed to be held.

Republicans will spend the week trying to convince the American people that the president deserves a second term. Aides want the convention to recast the story of Trump’s presidency and present the election as a choice between his vision for America’s future and the one presented by Biden.

“Over the next four days, President Trump and Republicans are going to talk about all we have achieved the past four years, and cast an aspirational, forward-looking vision about what we can achieve in the next four,” said GOP Chair Ronna McDaniel.