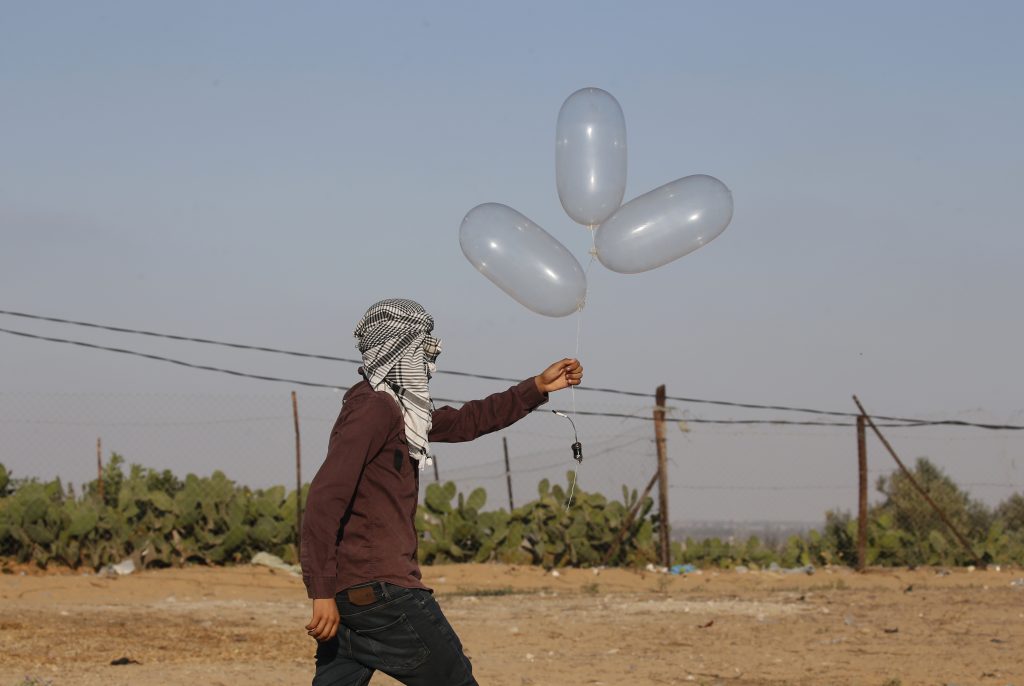 The IDF struck terror targets in the Gaza Strip early on Monday, in response to incendiary balloons launched into Israel the day before. This was the latest exchange as tensions between the two sides intensified in recent weeks.

The IDF said it bombed “military posts and an underground infrastructure” belonging to Hamas. There were no immediate reports of casualties.

Terrorists affiliated with Hamas have launched scores of incendiary balloons into southern Israel in recent weeks, causing extensive damage to farmland, in a bid to pressure Israel to ease the blockade imposed since Hamas took control of the territory in 2007. On Friday, Palestinian terrorists launched 12 rockets at Israel, nine of which were intercepted, in the largest outbreak of violence in recent months.

Israel has responded to the balloons and sporadic rocket fire with airstrikes on terror positions.

Two suspected explosive devices were found Sunday in southern Israel after apparently being flown into Israeli territory from the Gaza Strip, as balloon attacks continued throughout the day, according to officials from the Eshkol Regional Council.

“One device was found next to a playground and a second was found in a tree. In both cases, a police sapper was called. No damage or injuries were caused,” an Eshkol spokesperson said.

Throughout the day, dozens of balloons carrying explosives and incendiary devices were launched into southern Israel, causing at least 28 fires, officials said.

According to Fire and Rescue Services, fires were reported in the areas of Sha’ar Hanegev, Eshkol, Hof Ashkelon and Sderot. The fire department said most of the fires were relatively small and did not represent a threat to nearby communities.

Over the past few weeks, Palestinians in Gaza have again begun launching balloon-borne incendiary and explosive devices into southern Israel, sparking dozens of fires that caused environmental and property damage in the region. Rockets have also been fired on multiple occasions at Israeli cities and towns, including over a dozen projectiles overnight Thursday. Those attacks have drawn daily retaliatory Israeli strikes against Hamas installations.

The Qatari envoy to Gaza, Mohammed al-Emadi, is expected to visit the Strip this week for the first time since February to deliver a cash payment to Gaza residents.

The money has continued to arrive regularly despite al-Emadi not being present himself over the last six months. However, Israel has threatened not to allow him in if the incendiary balloons and rocket attacks persist.

Hamas is under immense international pressure — from Qatar, Egypt and U.N. Envoy Nickolay Mladenov — to halt its attacks, alongside pressure from the Gazan public, which is getting only three to four hours of electricity per day after becoming used to more than three times that amount, after Israel ended fuel imports in response to the violence.

According to a report Saturday night, Hamas’s entire leadership in Gaza has gone underground in anticipation of possible targeted killings by Israel.

The targeted killing of a Palestinian leader in Gaza is a rare event, but both Prime Minister Benjamin Netanyahu and Defense Minister Benny Gantz have hinted at a possible return to the policy, with Gantz warning on Thursday that the IDF was able to hit human targets as well as buildings and terror infrastructure.

Gaza terror groups have warned Israel against reinstating its policy of targeted killings, saying it would be met with a large and coordinated response, including thousands of missiles fired at Tel Aviv, a Lebanese newspaper reported on Saturday.