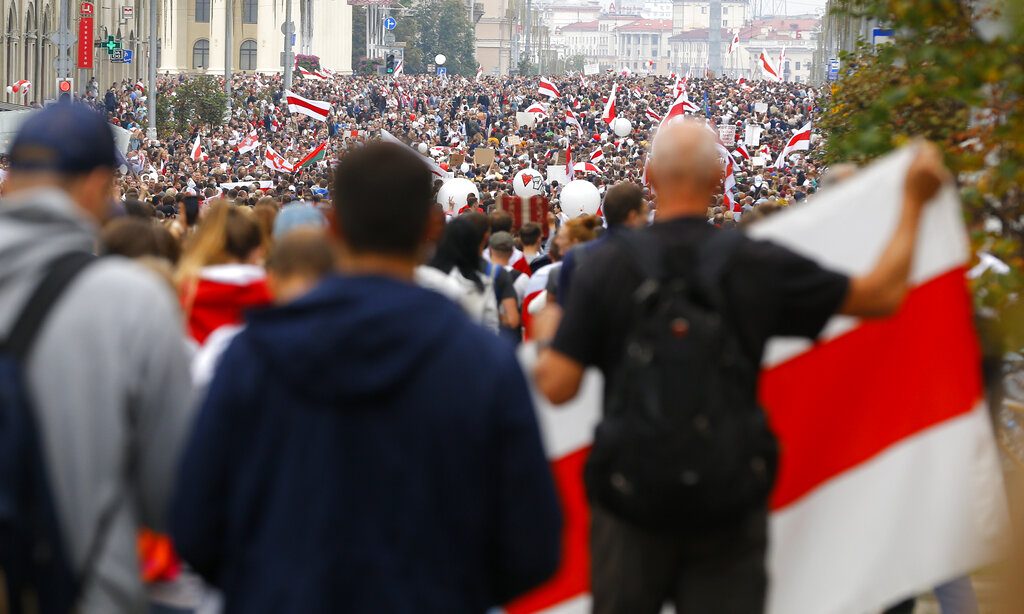 More than 100,000 protesters demanding the resignation of Belarus’ authoritarian President rallied Sunday in a vast square in the capital, keeping up the massive outburst of dissent that has shaken the country since a disputed presidential election two weeks ago.

Sunday’s demonstration overflowed Minsk’s sprawling 7-hectare (17-acre) Independence Square. There were no official figures on crowd size, but it appeared to be 150,000 people or more.
Dozens of police prisoner transport vehicles were parked on the fringes, but police made no immediate efforts to break up the gathering.

Earlier this month, some 7,000 people were arrested, many of them beaten with clubs or wounded by rubber bullets, in the protests after the Aug. 9 election that officials say handed President Alexander Lukashenko a sixth term in office.

Protesters say the official election results, in which Lukashenko reportedly received 80% of the vote, are fraudulent.

The size and duration of the protests are unprecedented for Belarus, a former Soviet republic of 9.5 million people that Lukashenko has ruled with an iron fist for 26 years.

The 65-year-old leader appears to be flailing about for a strategy to counter the protests. He has repeatedly blamed Western interference, claimed the protests were backed by the United States and accuses NATO of building up troop concentrations in Poland and Lithuania on Belarus’ western border, which the alliance denies. He also claimed that Russian President Vladimir Putin was willing to offer security assistance to his government to quell the protests if he asked for it.

Lukashenko has consistently repressed any opposition during his time in office. Weariness with his hardline rule, as well as dismay over the country’s deteriorating economy and Lukashenko’s cavalier dismissal of the coronavirus pandemic, appear to have galvanized opponents.

A similarly enormous crowd turned out for a protest a week ago and daily demonstrations have taken place since the vote. Several of the country’s key factories have been hit with protest strikes by workers fed up with government policies. Those strikes not only threaten the already ailing economy but show that opposition to Lukashenko extends beyond educated white-collar circles and into his traditional blue-collar base.

“Belarus has changed. Lukashenko has been able to unify everybody, from workers to intelligentsia, in the demand for change,” said protester Slava Chirkov, who attended Sunday’s demonstration with his wife and son.

They held a sign declaring, “Lukashenko, your milk has gone sour,” referencing Lukashenko’s former job as the director of a Soviet-era collective farm.

Lukashenko’s main election challenger, Sviatlana Tsikhanouskaya, fled to Lithuania the day after the election. Several other possible challengers fled the country even before the election.

An opposition Coordination Council was created last week to develop a strategy for a transition of power, but authorities in Belarus have opened a criminal probe into its formation.