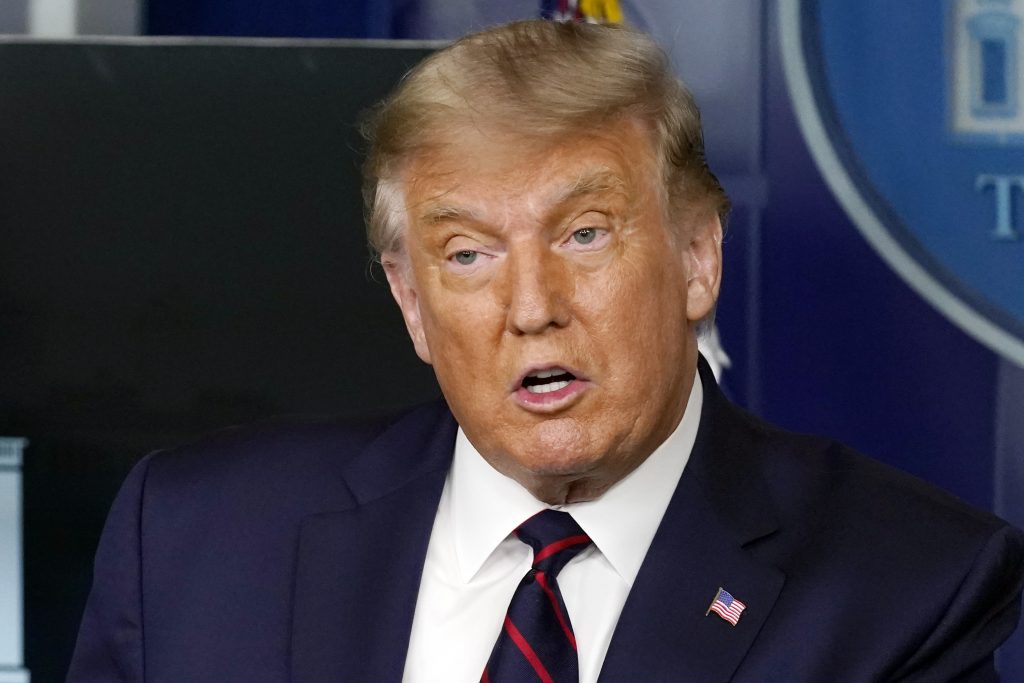 After expressing frustration at the slow pace of approval for coronavirus treatments, President Donald Trump announced Sunday the emergency authorization of convalescent plasma for COVID-19 patients.

The announcement came after days of White House officials suggesting there were politically motivated delays by the Food and Drug Administration in approving a vaccine and therapeutics for the disease that has upended Trump’s reelection chances.

On the eve of the Republican National Convention, Trump issued the emergency order — it would make it easier for some patients to obtain the treatment — in a news conference Sunday evening, according to White House officials.

The treatment that already has been given to more than 70,000 patients, according to officials familiar with the decision.

Many scientists and physicians believe that convalescent plasma might provide some benefit but is far from a breakthrough. It is rich in antibodies that could be helpful in fighting the coronavirus, but the evidence so far has not been conclusive about whether it works, when to administer it and what dose is needed. On CBS’s “Face the Nation” on Sunday, former FDA commissioner Scott Gottlieb said the blood product — derived from patients who have survived covid-19 — is “probably beneficial” for COVID-19 patients. The issuance of an emergency authorization would make it easier to get in some settings.

The announcement comes as President Trump has put extraordinary pressure on federal agencies to test and approve treatments and a vaccine against the novel coronavirus which has already killed more than 170,000 Americans. The president’s political advisers believe that having a vaccine, especially, by Election Day, is key to his prospects for winning.

It also lands a day after the president accused the FDA of impeding enrollment in clinical trials for coronavirus vaccines and therapeutics for political reasons. McEnany said in her tweet that FDA Commissioner Stephen Hahn and Health and Human Services Secretary Alex Azar would appear at the news conference.

“The deep state, or whoever, over at the FDA is making it very difficult for drug companies to get people in order to test the vaccines and therapeutics,” Trump said on Twitter on Saturday. “Obviously, they are hoping to delay the answer until after November 3rd. Must focus on speed, and saving lives!” He tagged Hahn in the tweet.

“I can tell you that the announcement that’s coming today should have been made several weeks ago,” Meadows said on “Fox News Sunday,” previewing the administration’s plans. “It was a fumble by a number of people in the federal government that should have done it differently … and having been personally involved with it. Sometimes you have to make them feel the heat if they don’t see the light.”

Convalescent plasma has long been used for other infectious diseases, including Ebola. The treatment’s effectiveness for COVID-19 has appeared promising but has remained unsettled because scientists don’t yet have results from rigorous clinical trials. The tens of thousands of patients already treated have been enrolled in an expanded access program sponsored by the FDA and run by the Mayo Clinic.

Arturo Casadevall, chair of molecular microbiology and immunology at the Johns Hopkins Bloomberg School of Public Health, expressed support for an emergency use authorization earlier this week, saying it could make it somewhat easier to access the treatment. The lack of an authorization “makes it harder, particularly in hospitals that don’t have the resources to do all the paperwork that is needed to be part of the expanded access program” facilitated by the Mayo Clinic, he said. “Simply because they’re so busy, the hospitals are stretched.”

Kate Fry, chief executive of America’s Blood Centers, which represents blood banks, said the Mayo program was never designed to provide plasma supply long term. “It really has gotten so large that it has sort of gone past its intended purpose,” she said, adding the FDA approval would ease the burden for clinicians and physicians.

One of the administration officials who spoke on the condition of anonymity said that the announcement follows two weeks of “insane fights.” The official said that Trump held more conversations on the issue Saturday and that those involved have agreed to give it a “tentative try.”

Whether the FDA should give plasma emergency authorization — a temporary approval granted during a public health emergency that requires much less rigorous evidence than a full approval — follows weeks of discussion.

Until recently, Trump had praised the FDA for moving quickly on coronavirus treatments and vaccines. But on Wednesday, he claimed the FDA was delaying authorizing convalescent plasma until after Nov. 3 for political reasons.