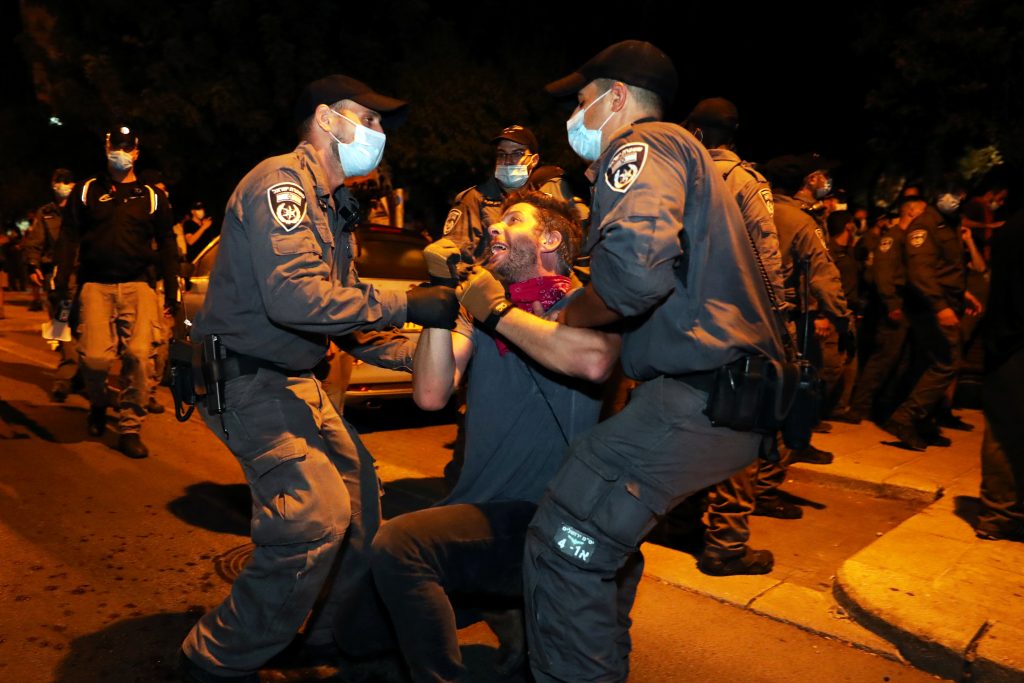 An investigation into alleged police brutality was begun on Sunday after violent incidents at a demonstration in Yerushalayim on Motzoei Shabbos.

The Police Internal Investigations Department said it will examine the cases of two protesters who were reportedly assaulted by police officers without provocation.

Ten who were arrested during the demonstration were released on conditions by a court despite a police request to extend their remand.

Guetta was caught on video footage shoving and hitting one protester, and then pushing people to the side as he chased after another, hitting him in the face and pushing him to the ground.

In a statement, police said Guetta claimed that he was attacked, but “nonetheless, the incident will be checked and investigated.”

“Two were arrested for assaulting the officer, one of whom admitted to the assault,” deputy police chief Ofer Shomer told the Kan public broadcaster on Sunday. “There is a video where you see that the officer was punched.”

Meretz MK Yair Golan said that one of the demonstrators who was assaulted was not guilty of any provocation.

“I was there yesterday in front of the policeman who hit the demonstrator hard,” Golan tweeted.

“There was no provocation on the part of the protester. I come to every demonstration, always making sure to thank the cops for their professional work, but yesterday a line was crossed. Such an event must not happen again,” Golan said.

One of those arrested, Avi Kaddish, told Channel 12 news that he was in court because he refused to sign a 14-day order barring him from the city for allegedly disturbing public order and interfering with a police horse during the course of its duties — charges he described as “delusional.”

“I was standing on the sidewalk and the police were charging on their horses. People fled everywhere and a woman fell next to me. I stood between her and the rider, and then riot police came and pinned me to the floor,” Kaddish said. “This is a false arrest. I am not a person who attacks police officers.”

Thousands participated in the anti-Netanyahu demonstration outside his official residence, waving signs and flags and calling for his resignation.

Meanwhile, a police officer was ordered by a Yerushalayim court to pay 21,000 shekels for twice striking a chareidi demonstrator in the face (15,000 in damages, 6,000 in legal costs).

The first incident occurred in January 2017 when the officer, Ido Katzir, thought the plaintiff had cursed another policeman, took him aside and slapped him. Katzir initially denied the charge, but later admitted to it.

Although the plaintiff did not sustain injury from the blows, the court accepted the argument of his lawyer, Itamar Ben-Gvir, that the slaps themselves and the considerable force with which they were delivered, constituted damages.