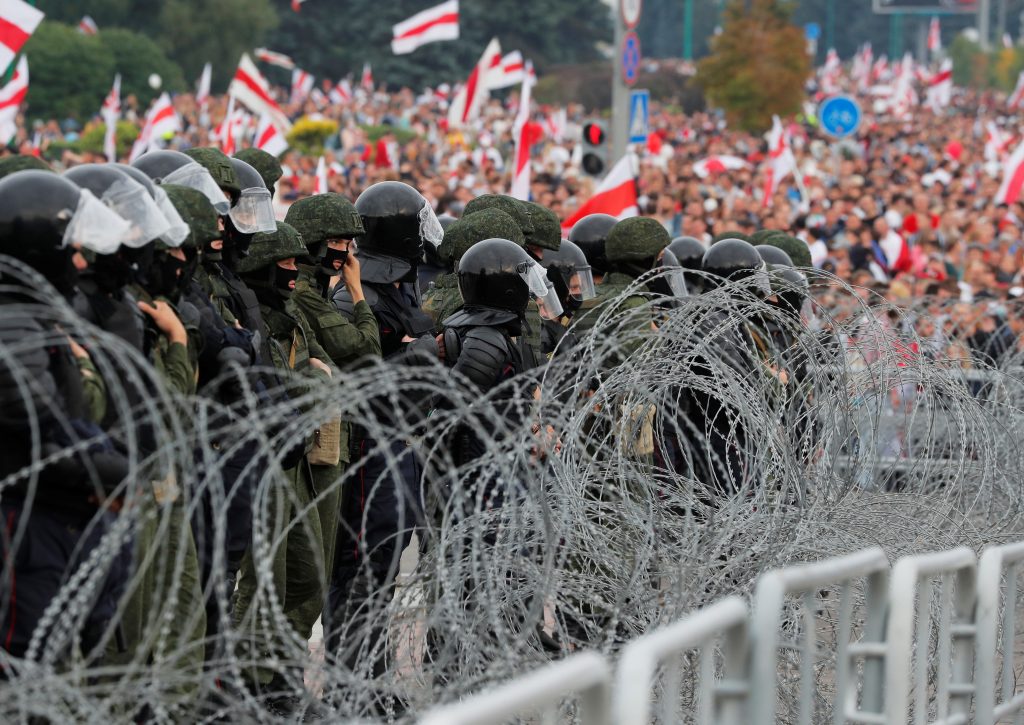 Protesters gathered in Minsk as opposition forces try to keep up pressure on Belarus President Alexander Lukashenko, while his security apparatus makes a show of force in the country’s capital.

Police patrols on main highways leading to Minsk are slowing incoming traffic and making it harder for protesters from other parts of the country to reach the capital. Rainy weather and fatigue after two weeks of demonstrations are also impeding the protests, which have scattered into multiple events across the country, including strikes at factories and dissent at public institutions.

Many are heeding the call to rally from the main opposition leader, Svetlana Tikhanovskya, who is in exile in Lithuania. People streamed from adjacent streets into a packed Independence Square, home of parliament and other government buildings. Demonstrators chanted “MTZ” to honor striking workers at the Minsk Tractor Plant and “Tribunal!”

Lukashenko has been confronting the biggest protests in his 26 years of rule amid international condemnation of the Aug. 9 presidential election that he claimed to have won by a landslide.

“You have Saturday and Sunday to think,” he said at a rally in the city of Grodno, according to comments published on the presidential website. “From Monday don’t be sorry.”

Hundreds of thousands of people have taken to the streets in Minsk and other cities to demand his resignation, while riot police have beat demonstrators and detained nearly 7,000 amid allegations of torture in custody.

Lukashenko called for citizens to forgive enforcement authorities. “Even if they made mistakes, forgive them.”

“NATO troops are coming closer to our borders,” he said during a visit to soldiers in the Grodno region. “They are all moving to bring in a new president.”

Belarus didn’t ask Russia for help within the Collective Security Treaty Organization — the military alliance uniting post-Soviet states — and is able to cope on its own, CSTO’s Secretary General Stanislav Zas told reporters in Moscow, according to Interfax.

While there are signs of normalization in Belarus, Russia sees attempts to “provoke bloodshed” as happened in Ukraine during 2014 protests, Foreign Minister Sergei Lavrov said at a televised meeting with young Russians.