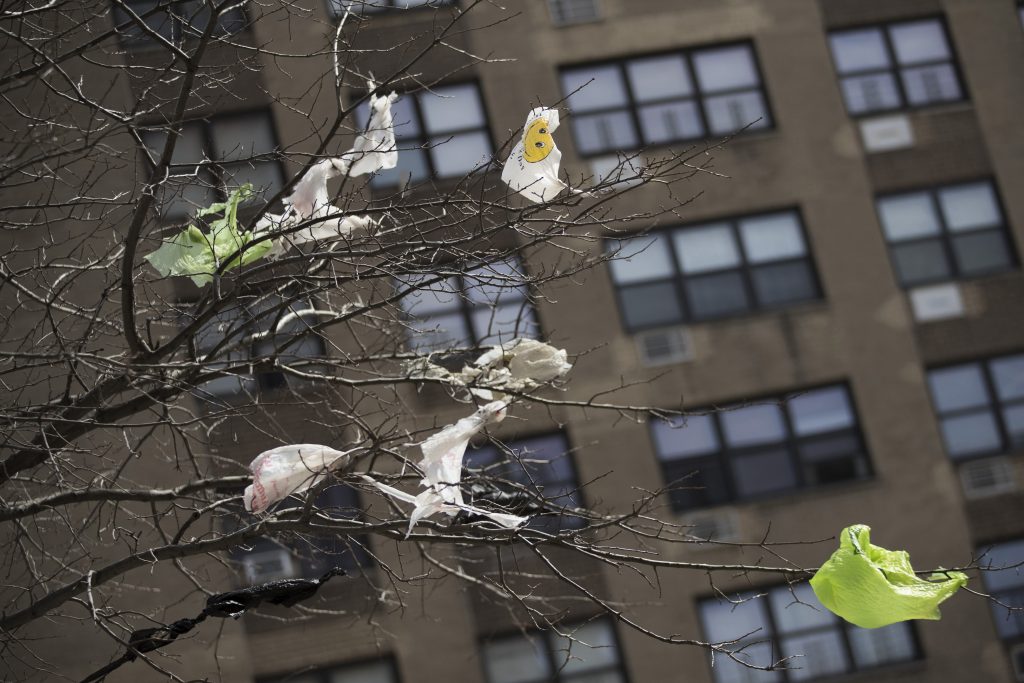 New York’s never-enforced ban on single-use plastic bags has survived a lawsuit lodged by a plastic-bag manufacturer and convenience-store owners, but a state judge ruled Thursday that state regulators went too far by allowing stores to hand out thicker plastic bags.

A state law effective March 1 bans many types of businesses from distributing the thin plastic bags that have been clogging up landfills, getting tangled in trees and accumulating in lakes and seas. Single-use paper bags are still allowed, but counties have the option of imposing a 5-cent fee on them.

But the Department of Environmental Conservation agreed to delay enforcement of the law as the state fought to get a court to toss the lawsuit. And amid the COVID-19 pandemic, some retailers have prohibited customers from bringing in reusable bags that New York lawmakers hope to promote.

In a decision released Thursday, state Supreme Court Justice Gerald Connolly ordered New York to strike a part of the plastic-bag-ban regulations that some environmental activists worried would allow retailers to eventually hand out a bag several times thicker than the kind provided at Macy’s and shopping malls.

The law itself says stores can still provide customers certain kinds of plastic bags, including produce bags or “bags prepackaged for sale to a customer.” But only the rules drawn up by state regulators specified that retailers can provide a customer a reusable bag made with plastic that’s at least 10 mils thick — as thick as about ten pieces of paper.

Now, Justice Connolly says the state can’t enforce that part of the regulations.

State environmental officials are reviewing the justice’s decision and plan to soon notify stores and businesses about when and how New York will start enforcing the law.

State environmental conservation commissioner Basil Seggos has defended the regulations as making sense of the two laws. And his agency has said the plastic industry probably lacks the machinery to produce thicker plastic bags that could meet New York’s proposed standard and still be cost-effective.

“The court’s decision is a victory and a vindication of New York state’s efforts to end the scourge of single-use plastic bags and a direct rebuke to the plastic bag manufacturers who tried to stop our law,” Seggos said in a statement.

The justice said that state regulators’ exemption for certain reusable plastic bags was in “plain contradiction” of the state law.

“It remains, of course, within the province of the Legislature to enact legislation to the extent it seeks to expand the list of ‘exempt bags,’” he wrote.

Justice Connolly said opponents failed in their arguments to strike down New York’s plastic-bag ban in light of the ongoing COVID-19 crisis.

Plastic-bag manufacturers and convenience-store owners had argued that New York’s plastic bag ban would bankrupt their industries. And they argued the court should discard the entire ban because state regulators needed legislative permission for their exemption for thicker plastic bags.

Zachary Taylor, director of the American Recyclable Plastic Bag Alliance, said New York’s law is still “unworkable” and warned that small retailers will struggle to get paper bags amid the pandemic.

The advocacy group, which represents the U.S. plastic-bag-manufacturing industry, has reported spending $145,000 on lobbying New York lawmakers who pushed for single-use bag regulations over the last two years, according to state lobbying records.

“Unfortunately, we are back where we started, and New York’s bag ban is still broken,” Taylor said.

Supporters of New York’s ban who had criticized the exemption for thicker bags said New York’s plastic-bag ban is now a model for other states.