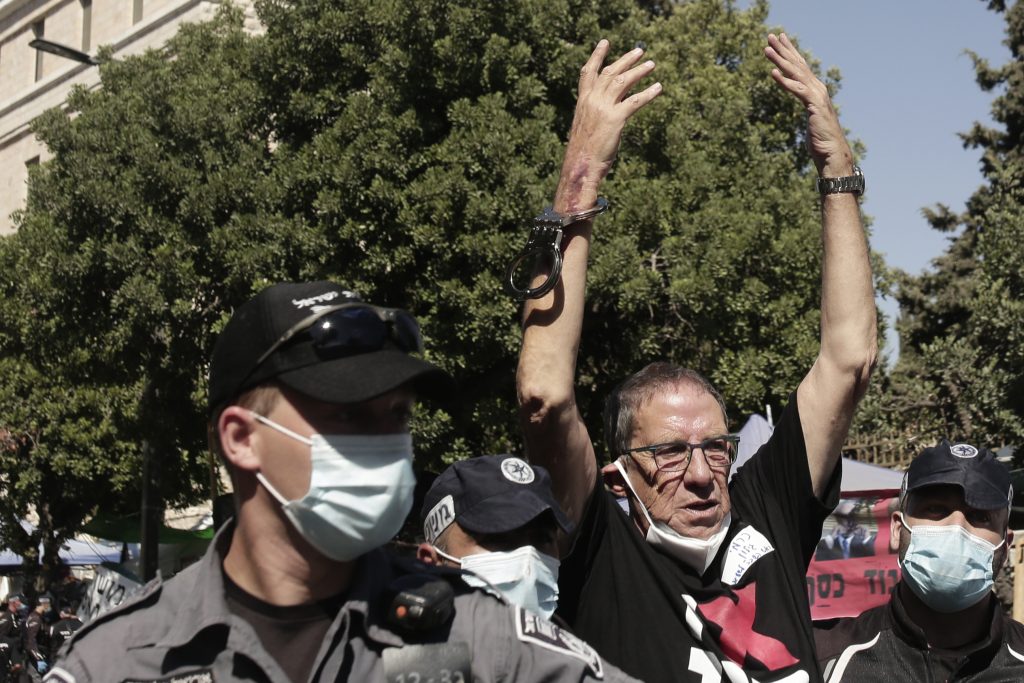 Israeli police dispersed dozens of protesters outside Prime Minister Binyamin Netanyahu’s official residence on Thursday ahead of a planned rally by supporters of the Israeli leader.

Some of the protesters, including a former head of the Shin Bet internal security service, chained themselves to roadblocks before police unbound them and dragged them away.

“Clearing part of the encampment is a violent act against the protesters,” Carmi Gillon, the former Shin Bet chief, was quoted as saying by Haaretz. “The right to protest is a right I will not allow to be taken away from me.”

He raised his arms as he was led away, showing what appeared to be bruises and scrapes.

The forcible removal of an opposition MK, Yorai Lahav Hertzanu of the Yesh Atid party, drew criticism as well.

Party chairman Yair Lapid warned: “It begins with clearing the protest without any logical claim and continues with the forcible clearance of a Knesset member [Hertzanu], former Shin Bet head and Brig. Gen. Amir Haskel. All this so Bibi can bring a few guys to applaud him. We’re in a war for a democracy,” Lapid tweeted.

Likud MK Zeev Elkin also objected. “I have a deep ideological disagreement with MK [Hertzanu] and his party and of course I have no sympathy for the protests at Balfour. But there’s no place for behavior like this by the Israel Police toward a Knesset member and is completely contrary to the immunity of Knesset members.”

Police defended their action in a statement: “After lengthy attempts to negotiate with the demonstrators, and in light of their refusal to move to the area they had been assigned, the Israel Police began transferring them to that area.”

Haskel told The Times of Israel that police previously told them they could stay where they were. He charged it was a double standard for the anti-Netanyahu protesters to be removed when a similar pro-Netanyahu protest encampment there has never been forced to do so.

“This is a clash of their right to protest versus our right to protest. It’s their right, just like ours,” Haskel said. “We’ve been protesting here for more than two months. Have we ever asked the [pro-Netanyahu protesters] to remove their tent here?”