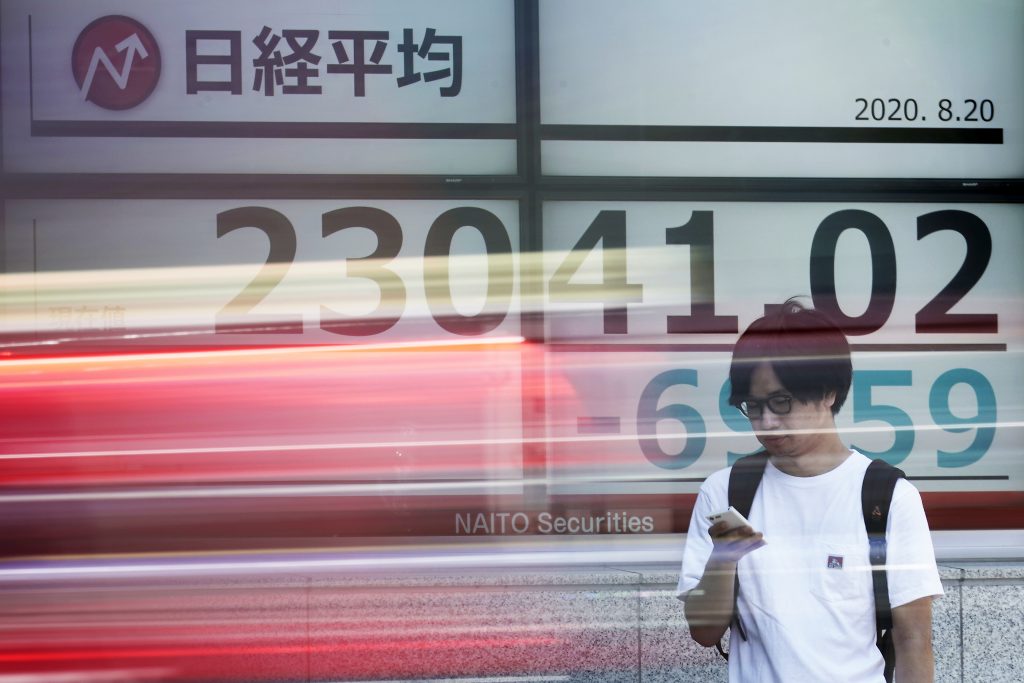 Asian shares slipped Thursday after sobriety set in on Wall Street, and the U.S. Federal Reserve minutes laid out challenges for the economy amid the coronavirus pandemic.

“The latest Fed minutes had been one to offer a reality check for markets, though with the elevated prices, it had likely been an excuse to take some profit off the table as well,” said Jingyi Pan, a market strategist with IG.

“Most notably, Fed minutes from the July FOMC meeting had reflected officials’ views on the pandemic weighing heavily on the economy and posing risks to the medium-term outlook,” she said.

The central bank has been one of the main pillars propping up the market after it slashed short-term interest rates to their record low and essentially promised to buy as many bonds as it takes to keep markets running smoothly.

The Fed’s minutes of its latest poli02.cy meeting, released late Wednesday, showed policy makers are finding it difficult to forecast the path of the economy, which will depend greatly on what happens with the virus.

The Asian region depends heavily on a healthy U.S. economy to keep its growth going. Export-dependent Japan has sunk into recession, slammed by the slowdowns in the U.S., as well as China, with production halted, tourism squelched and consumption crimped. Analysts say a recovery is likely coming for the world’s third largest economy, but also acknowledge great uncertainty, without a vaccine for COVID-19.

Investors still seem to believe the U.S. Congress and the White House will reach a deal to deliver more aid to the economy after federal unemployment benefits and other stimulus expired.

Investors around the world are also waiting for developments on the rising tensions between the United States and China. The world’s largest economies have longstanding trade issues, and President Donald Trump has recently been targeting Chinese tech companies. Also hanging over the market is the upcoming U.S. election, with potential big changes in policies.

Earnings reporting season for big U.S companies has nearly wrapped up, with businesses in the S&P 500 on track to report a sharp decline in their profits for the spring, but not as bad as Wall Street expected.

Benchmark U.S. crude lost 44 cents to $42.49 a barrel in electronic trading on the New York Mercantile Exchange. It rose 4 cents to $42.93 per barrel Wednesday. Brent crude, the international standard, fell 38 cents to $44.99 a barrel.