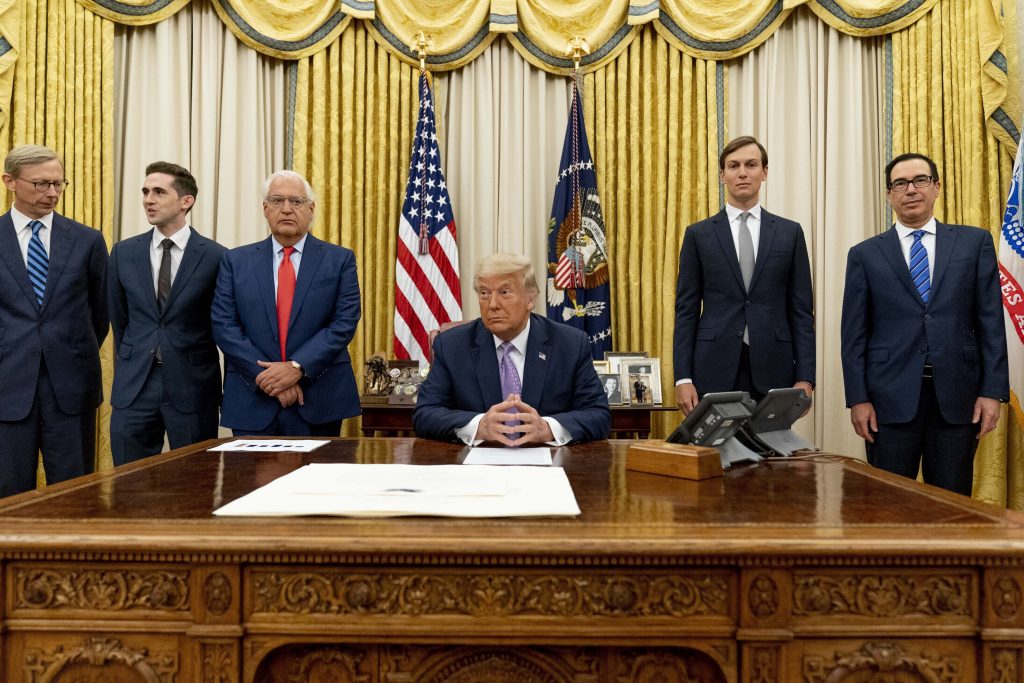 Secret talks and quiet ties — that’s what paved the way for last week’s deal between the United Arab Emirates and Israel to normalize relations.

Touted by President Donald Trump as a major Mideast breakthrough, the agreement was in fact the culmination of more than a decade of quiet links rooted in staunch opposition to Iran that predated Trump and even Barack Obama.

And the deal leaves behind what had been a cornerstone of U.S. policy in the region: resolution of the Israeli–Palestinian conflict.

The effort to achieve that goal picked up speed 17 months ago at a U.S.-led conference in Warsaw, according to officials involved.

That February 2019 meeting, originally conceived as an anti-Iran gathering, morphed into a broader Mideast security endeavor after European objections to its agenda. Many countries opted not to send their top diplomats, and Russia, China and the Palestinians skipped it entirely. Israeli Prime Minister Binyamin Netanyahu attended, however, as did the foreign ministers of key Arab states.

At the summit, diplomats from Saudi Arabia, the UAE and Bahrain spoke of the threat Iran posed to their security and its use of Shiite proxies in Iraq, Syria, Lebanon and Yemen. They stressed that confronting Iran had become the top priority — ahead of resolving the Israeli-Palestinian conflict — in comments appearing in leaked video, whose authenticity was confirmed by a U.S. official who attended the gathering.

“Iran was very high on the agenda in Warsaw because Iran’s foreign policy is the biggest driver of instability in today’s Middle East,” the U.S. special envoy for Iran, Brian Hook, told The Associated Press.

Four months after the summit, a secret meeting between the UAE and Israel took place on June 17, 2019, in Washington.

The trilateral focused on regional, cyber and maritime security, as well as diplomatic coordination and disrupting terror finance, according to a U.S. official who participated but was not authorized to discuss the matter publicly and spoke on condition of anonymity.

More meetings followed in the U.S., Israel and the UAE capital of Abu Dhabi, culminating in Thursday’s Trump announcement that his administration had brokered a deal between Israel and the UAE to establish diplomatic relations and exchange embassies. The UAE said Israel also agreed to halt its controversial plans to annex large areas of the occupied Yehudah and Shomron sought by the Palestinians.

Jared Kushner, Trump’s senior adviser, told White House reporters that discussions for the deal took place over the past year and a half.

“Look, at the end of the day, it’s an inevitability, right?” Kushner said, adding later, “No Israeli has ever killed an Emirati, right? There’s not that hatred between the people.”

To be sure, Israel and the UAE have never fought each other in war and do not share borders. Still, the agreement was far more warmly welcomed in Israel than the UAE, where the public has long viewed Israel with suspicion. But criticism has been muted, in part because of government suppression of free speech.

The UAE, composed of seven emirates run by hereditary rulers led by Abu Dhabi, will be only the third Arab nation, after Egypt and Jordan, to have full ties with Israel. By doing so, Abu Dhabi Crown Prince Mohammed bin Zayed laid a path for countries like Morocco, Bahrain, Oman or Sudan to potentially follow.

There are many, though, who shun any Arab embrace of Israel. To the Palestinians, who say they had no prior notice of the deal, the UAE turned its back on the longstanding Arab consensus that recognition of Israel can only come after Israeli concessions in peace talks lead to the creation of a Palestinian state.

“I think the UAE is least beholden to these old formulas of solidarity… which gives them more strategic flexibility,” said Kristin Smith Diwan, a scholar at the Arab Gulf States Institute in Washington.

“There’s no question that among the broader Arab and Gulf public, this will be a very unpopular move,” she said, adding that the agreement also leaves the UAE vulnerable to whatever decisions Israel makes in the future.

For the UAE, however, the calculus to build relations with Israel carries a number of strategic advantages beyond countering Iran and suspending annexation.

Through Israel, the UAE can build stronger ties with both Republicans and Democrats — a crucial hedge considering the uncertainty of Trump’s reelection chances against former Vice President Joe Biden in November’s U.S. presidential elections.

Another impetus was the perception among Arab Gulf states that U.S. dependability had waned, from the Obama administration’s nuclear deal with Iran, to Trump’s unpredictability in foreign policy. Their views on the matter have been reflected in state-linked newspaper columns and in quiet grumbling at private gatherings.

Saudi Arabia and the UAE were also barred by Congress from purchasing billions of dollars in U.S. weapons due to the humanitarian toll of their war in Yemen, before Trump vetoed the measures.

“Their first preference is to have the United States heavily involved in the Middle East as their primary ally. If they can’t get that, which… under Trump they absolutely cannot, then they’re going for second best, and Israel is second best,” said Kenneth Pollack, a former CIA analyst and now Mideast expert at the American Enterprise Institute.

The Saudis and Emiratis want to build up military strength and want the U.S. to give them more freedom of maneuver in places like Libya, Yemen and the Horn of Africa. With a stronger Emirati–Israeli alliance, “they can count on the Israelis to also make that case in Washington,” Pollack said.

Hook argues that it was the Trump administration’s aggressive Iran policy and decision to withdraw the U.S. from the nuclear accord that helped seal the latest deal.

“Israel and UAE felt betrayed by Obama’s Iran strategy. With us, they knew we stood with our allies and partners, and that trust was a critical factor in getting this peace agreement done,” said Hook, who was involved in the trilateral talks.

UAE efforts to seek better ties with Israel as a means of improving its standing in Washington dates back to 2006, according to Sigurd Neubauer, author of the book The Gulf Region and Israel: Old Struggles, New Alliances.
It began with a public-relations crisis over Dubai port operator DP World’s failed bid to manage major ports in the U.S. The longtime UAE ambassador to the U.S., Yousef Al-Otaiba, held his first meeting with an Israeli official in 2008 and a diplomatic channel was established to focus on Iran, Neubauer said.

The relationship hit a snag in 2010 when the UAE accused Israeli Mossad operatives of assassinating Hamas figure Mahmoud al-Mabhouh in a Dubai hotel.

Nearly a decade later, an Israeli minister stood in Abu Dhabi and sang her country’s national anthem at a sports event, shook hands warmly with Emirati officials and toured the emirate’s grand mosque in a public spectacle of warming ties.

In January, when Trump unveiled his Mideast plan — which was rejected by the Palestinians — the ambassadors of the UAE, Bahrain and Oman attended the White House ceremony, which featured Netanyahu.

Senior Emirati diplomat Anwar Gargash said the relationship with Israel grew “organically” over the last 15 years or so.

“Through engagement with the Trump administration, the idea… developed and percolated, and it was right to do it,” he said.