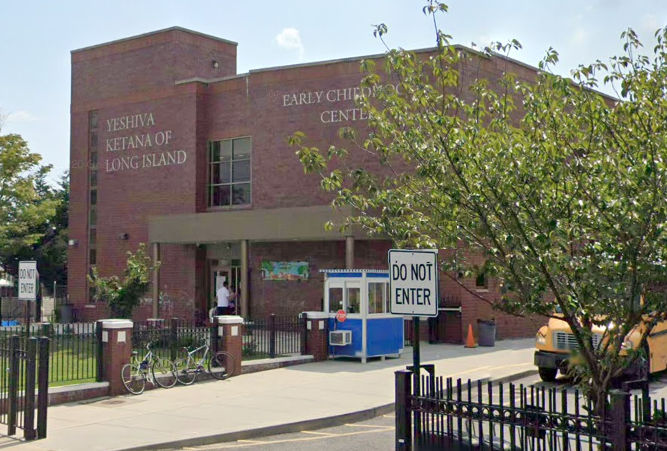 A potentially dangerous situation was avoided on Tuesday when Nassau County Police arrested a man who had expressed a threat against a day camp which operated on the property adjoining his home in the Inwood section of Long Island.

Nicola Pelle, 58, lives next door to the campus of Yeshiva Ketana of Long Island (YKLI), where Camp Areivim, a private day camp, operates on the campus of Yeshiva Ketana. Pelle, who has had a cordial relationship with the yeshiva for years, seems to have been aggravated due to the increased noise and busses which came and went at intervals throughout the day, and his frustration led him to register a complaint with the Health Department that the campers were not wearing masks.

“The guidelines for day camps do not actually require the campers to be masked,” a spokesman for Yeshiva Ketana told Hamodia. “Nevertheless, we know that the day camp was following all the regulations of the Health Department guidelines. In fact, with the overgrowth of bushes which separate the neighbor’s property from our campus, it seems highly unlikely that he had any direct view of the campers. Chances are that his frustration got the better of him, and he called the authorities without thinking things through in a rational manner.

”When Pelle called the Health Department to complain that the children were not observing social distancing, the response he got was to call the police for assistance, which he preceded to do. When the police did not show up as quickly as he expected them to, he called again, and this time, in his frustration he asked the dispatcher if he had to shoot up the school in order to get their attention.

The police showed up immediately, and promptly asked Pelle if they could search his property. “It seems that he did not quite recall what he had said to the dispatcher, and he thought they came because of the social distancing complaint,” the yeshiva spokesman said. “When he agreed to allow the police to search the premises, they found 14 weapons, including rifles, shotguns, and hand-guns, some which were legal and some which were not, and also two assault weapons.” In addition to the weapons charges, he was also charged with a felony of making terroristic threats.

Pelle is recovering from surgery, and neighbors suggested that his medications may have played a role in the way he acted.

“We must thank Hashem for protecting us. Hinei lo yanum velo yishan Shomer Yisrael. Although we have never had any issues with this neighbor in the past, we realize that the situation could have ended differently,” Rabbi Tzvi Krigsman, Menahel of YKLI said. “We are also grateful to the Nassau County Police for responding so quickly and professionally, and de-escalating the situation successfully.

As an extra precaution, police have increased their presence around the yeshiva, and the Hanhallah reassured the parents that they are monitoring the situation carefully to ensure the safety of the children.