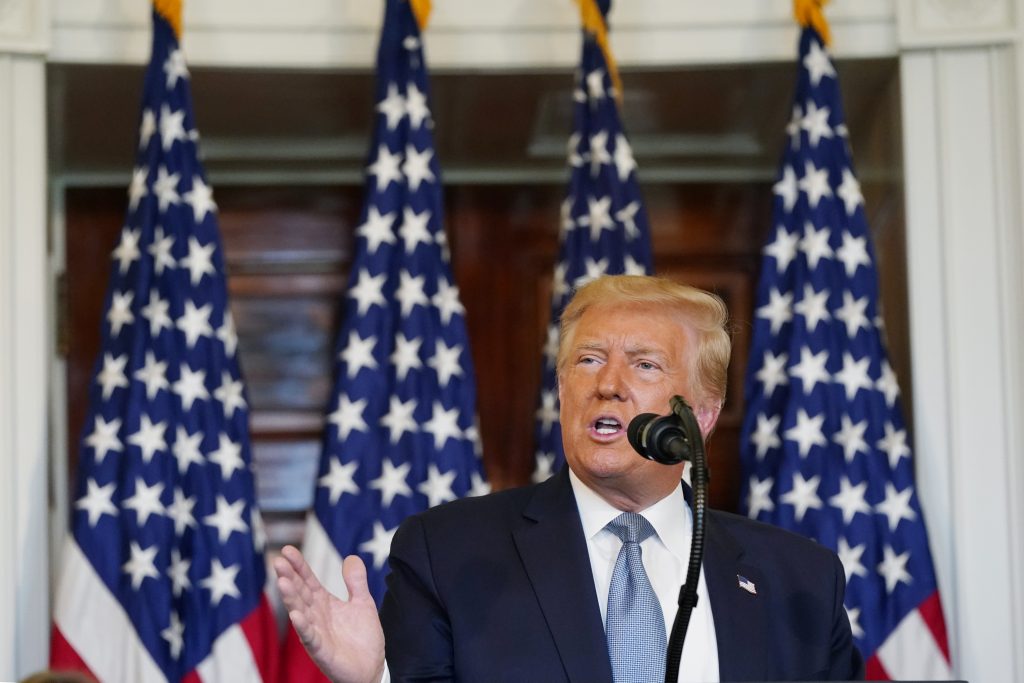 Grappling for votes — and the spotlight — as Democrats hold their national convention, President Donald Trump targeted voters in key states and constituencies Tuesday and promised a pardon for Susan B. Anthony, a leader in the women’s suffrage movement.

President Trump headed for Arizona, one of the top 2020 battleground states, to press his case against his Democratic challenger, Joe Biden, painting him as radically left and out of the political mainstream.

The president worked in a last-minute stop in Cedar Rapids, Iowa, for a briefing about damage from the derecho last week that has left thousands without power and caused catastrophic damage across the battleground state. Many there have expressed outrage that their plight has not received more national attention.

The storm, which packed 100 mph winds and similar power to an inland hurricane, swept across the Midwest last week, blowing over trees, flipping vehicles and causing widespread damage.

Trump aimed to highlight his immigration agenda in Yuma, Arizona, and receive an update on construction of his southern border wall, making his second trip to the city in less than a month. It was an effort to highlight his work to deliver on a key 2016 campaign pledge.

Before leaving, Trump held a White House event to announce the pardon of Anthony, convicted of voting in 1872 in violation of laws permitting only men to vote. Trump said he would sign “a full and complete pardon” for Anthony later Tuesday, the 100th anniversary of the ratification of the 19th Amendment, which ensured women the right to vote. It’s also known as the Susan B. Anthony Amendment.

Not everyone was enthusiastic about the pardon for Anthony, a New York resident who died in 1906.

New York Lt. Gov. Kathy Hochul demanded that Trump rescind it. “She was proud of her arrest to draw attention to the cause for women’s rights, and never paid her fine,” the Democrat tweeted. “Let her Rest In Peace.”

Anthony was arrested for voting in Rochester, New York, and convicted in a widely publicized trial. Although she refused to pay the fine, the authorities declined to take further action.

Visiting Anthony’s grave site in Rochester on Election Day has become a popular ritual in recent years. Thousands turned out in 2016 for the presidential match-up between Trump and Hillary Clinton, the first female presidential nominee of a major party. In 2018, voters showed up by the dozens to put their “I Voted” stickers on her headstone.

Before leaving Washington, the president also laced into former first lady Michelle Obama — one of the most popular figures in American politics — for her convention speech in which she said Trump was “in over his head” and urged voters to turn out en masse to remove the “wrong president for our country.”

Trump responded at a White House event, saying it was Mrs. Obama who was in “over her head” and calling her remarks “divisive.”

Preparations for Trump’s own acceptance speech next week were underway at the White House. The South Lawn was filled with scaffolding and equipment that would be needed for what would appear to be a rather large stage.

As was the case Monday in Minneapolis and Wisconsin, Trump’s Tuesday schedule did not show him venturing beyond the airport in Iowa or Arizona — a reflection of the new realities of campaigning in the midst of a pandemic. Instead, Trump has been delivering speeches that have had the feel of small outdoor rallies in airport hangars, often flouting recommendations against large group gatherings and mask-wearing.

Trump is set to travel to Pennsylvania on Thursday, visiting an important battleground state — and the state of Biden’s birth — ahead of his opponent’s acceptance speech.