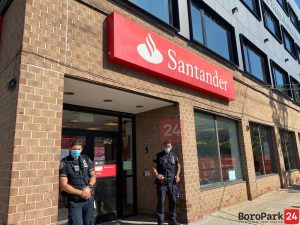 On Monday night, a group of black males pulled up to the Santander bank on 16th Avenue and 46th Street and withdrew thousands of dollars from the ATM machine, and pulled away without being stopped by the police.

As the group, who were masked and wearing gloves and appeared suspicious, pulled up to the bank in a red Mercedes and black Honda Accord, and entered the vestibule which housed the ATM machines. Some onlookers called Shomrim, who in turn reported it to the police at the 66th precinct. When the police arrived, they had the group claimed they were not doing anything wrong, and at the time the police could not prove otherwise. As a result, the police did not detain anyone.

Later it was discovered that the cards they were using for withdrawal were cloned, and they had been stealing over $160 thousand dollars from various accounts.

The police are now searching for the suspects.