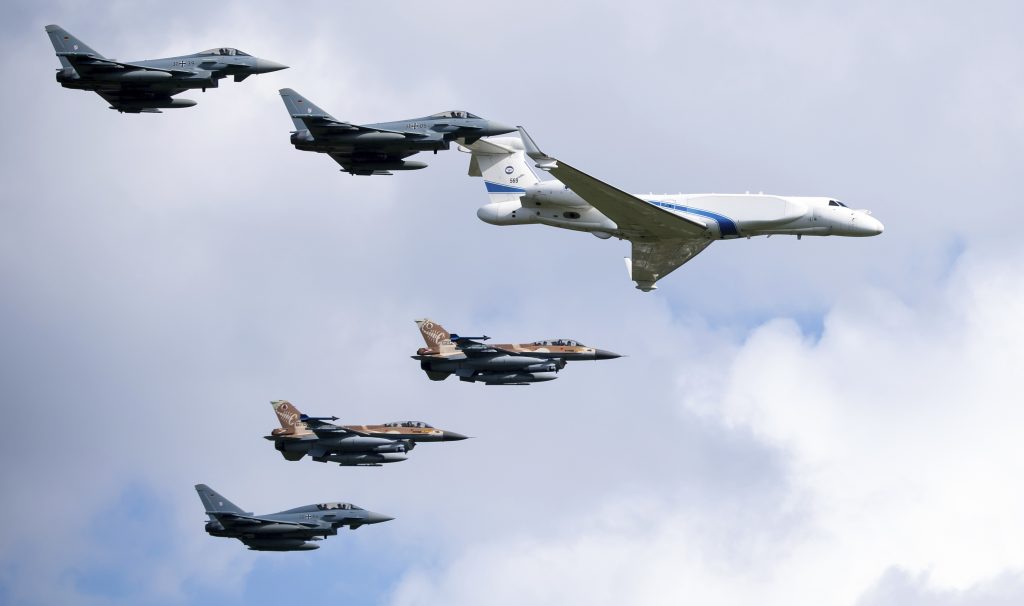 German and Israeli fighter jets flew in formation past the site of the 1972 attack on Israeli athletes at the Munich Olympics on Tuesday in their first joint exercise in Germany.

As part of their “Blue Wings 2020” maneuvers, German and Israeli pilots flew over the Fuerstenfeldbruck military airfield near Munich to commemorate the attack which left 11 Israelis, a German policeman and five Palestinian gunmen dead.

A gunfight erupted at the airfield after Palestinians from the Black September group took members of the Israeli Olympic team hostage at the poorly secured athletes village on Sept. 5, 1972.

Later on Tuesday, the jets will fly over the site of the Dachau concentration camp where some 200,000 people, many of them Jews, were imprisoned and 41,500 murdered Hy”d under Adolf Hitler’s Nazis. Set up in 1933, it was meant as a model for other concentration camps.

Senior officials, including a relative of a camp survivor and German Defense Minister Annegret Kramp-Karrenbauer will take part in a ceremony there.

Since 1945, Berlin has felt a special responsibility toward Israel and the joint maneuvers are the first time Israeli fighter planes have trained in Germany.

A rise in anti-Semitism, in particular an attack on a synagogue in Halle last year on Yom Kippur which left two people dead, has caused alarm in Germany.

Luftwaffe chief of staff Ingo Gerhartz said the program was a sign of friendship. The darkest chapter of German history handed the country the “task to resolutely fight anti-Semitism today,” he was quoted by broadcaster BR24 as saying.