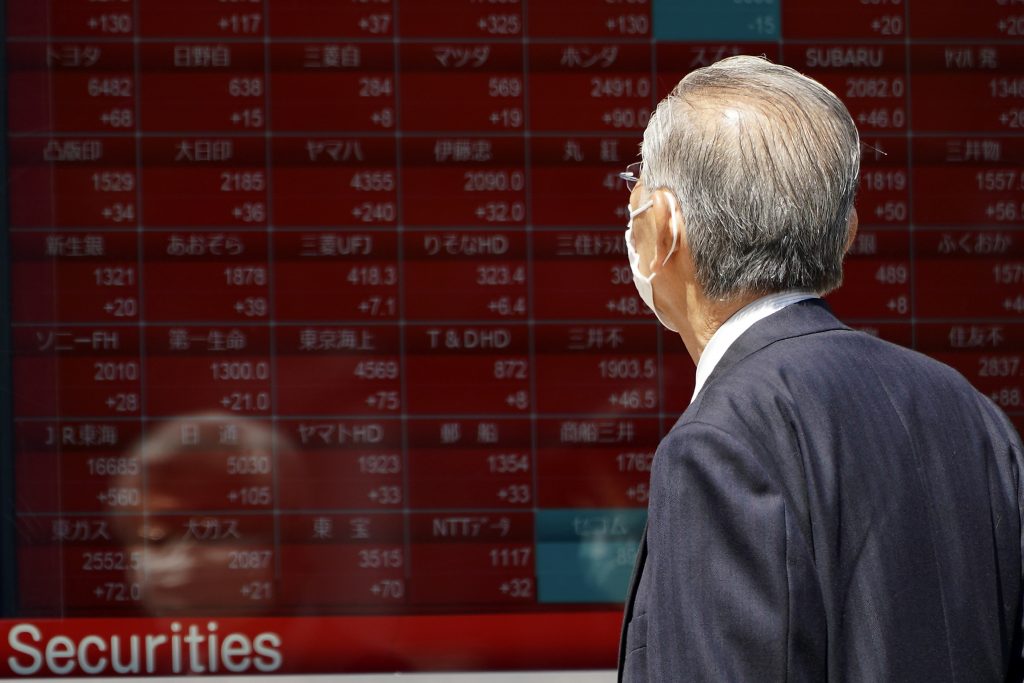 Shares were mixed in Asia on Tuesday, after buying of technology stocks nudged the S&P 500 closer to the record high it set in February before the pandemic crunched the global economy.

Benchmarks fell in Hong Kong, Tokyo and Seoul but rose in Sydney and Shanghai.

Markets were buoyed by developments in Washington, as Speaker Nancy Pelosi called the House back into session, cutting short the lawmakers’ summer recess for a vote expected Saturday on legislation to prohibit changes in the U.S. Postal Service amid growing concerns that the Trump administration is trying to undermine the agency ahead of the November election.

The proposed package will also include $25 billion to shore up the Postal Service, which is suffering losses. But prospects for additional economic aid for American workers and businesses remain uncertain after talks on a fresh stimulus package stalled.

Investors say it’s crucial that the support comes, particularly after $600 in weekly unemployment benefits and other stimulus from the U.S. government expired.

“The markets are in ‘show me the money’ mode, perhaps erring on the side of caution, not holding their breath for an imminent deal in Congress,” Stephen Innes of AxiCorp said in a commentary. “Sadly, this leaves the U.S. real economy waddling and many businesses and millions of consumers getting the short shrift.”

South Korean health officials said Tuesday they had found 457 coronavirus cases linked to a huge northern Seoul church led by a bitter critic of the country’s president, driving an alarming rise in infections in the greater capital area.

During a virus briefing, Kwon Jun-wook, director of South Korea’s National Health Institute, said the outbreaks could create a situation comparable to the “miserable scenes of the United States or European countries.”

There’s concern that the virus’s spread could worsen after thousand of protesters, including members of the church and its ultra-right pastor, Jun Kwang-hun, marched in downtown Seoul Saturday despite official pleas to stay home.

Without more help for the U.S. economy, analysts say the recovery that investors have been assuming is on the way won’t materialize. And that assumption is a huge reason the stock market is as high as it is.

Tech stocks across the S&P 500 climbed 0.5%, accounting for about two-thirds of the index’s gain. Nvidia jumped 6.7% for one of the biggest gains in the index, and Microsoft added 0.7%.

But losses for financial and energy stocks helped restrain the market’s gains. These areas tend to rise and fall with expectations for the economy.

Treasury yields moderated a bit, following the big run for the 10-year yield last week. It dipped to 0.68% from 0.71% late Friday. It had zoomed upward from 0.56% through last week.

Higher yields can be an indication that investors are upgrading their expectations for inflation and the economy. But they can also pull some buyers away from stocks into bonds, hurting stock prices in the process.

Benchmark U.S. crude oil gave up 21 cents to $42.68 per barrel in electronic trading on the New York Mercantile Exchange. It added 88 cents to settle at $42.89 per barrel on Monday. Brent crude, the international standard, lost 19 cents to $45.18.