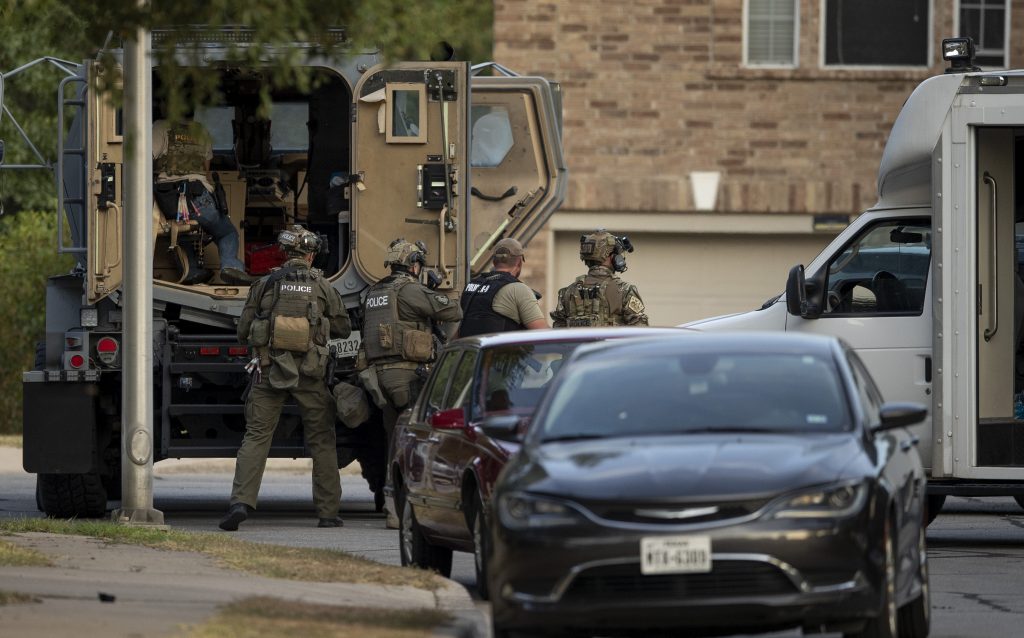 Three police officers were shot and a man remained barricaded inside a home with three of his family members in a suburb of Austin, Texas, authorities said.

Officers were still on the scene in Cedar Park early Monday morning, the police department tweeted.

Authorities responded to a call about 3:10 p.m. Sunday at a home off Natalie Cove from a mother who said her son kicked in the door of the home, Interim Chief of Police Mike Harmon said during a news conference near the scene.

The mother, a juvenile and another person, whose age was unknown, remain in the home held by the suspect, believed to be in his mid-20s, Harmon said. The suspect has “some mental-health issues,” he said.

Harmon said when officers arrived they were met with gunfire and taken to a local hospital. All three officers were stable and had injuries not considered to be life-threatening. At least one officer was to remain in the hospital overnight.

It is unclear whether the suspect was injured.

“We want to end this peacefully for everyone involved,” Harmon said, making a plea to the unidentified suspect. “Please, come out and surrender peacefully.”

Harmon said that the Cedar Park Police Department has a history at the residence, but did not provide details, including when police last visited the home.

As night fell in the Cedar Park neighborhood on Sunday where a water tower could be seen in the distance, lights from multiple police and emergency responder vehicles bounced off nearby homes. Vehicles moved along one street that ran perpendicular to another, where orange cones had been placed to restrict traffic.

The city of Cedar Park has asked residents to avoid Bagdad Road between Osage Drive and New Hope Drive, the city said on social media. The Cedar Park police and fire departments have closed the southbound lane of Bagdad Road at Heritage, the post said.

Multiple agencies are on the scene, which is still active.

“We have negotiators right now reaching out to the suspect,” Harmon said.

“Our hearts are with the police officers who were injured while protecting the Cedar Park community this afternoon. We must never take for granted the service and sacrifice of our law enforcement officers, and the State of Texas stands ready to provide the support and resources needed to bring justice to those involved,” Republican Gov. Greg Abbott said in a statement.