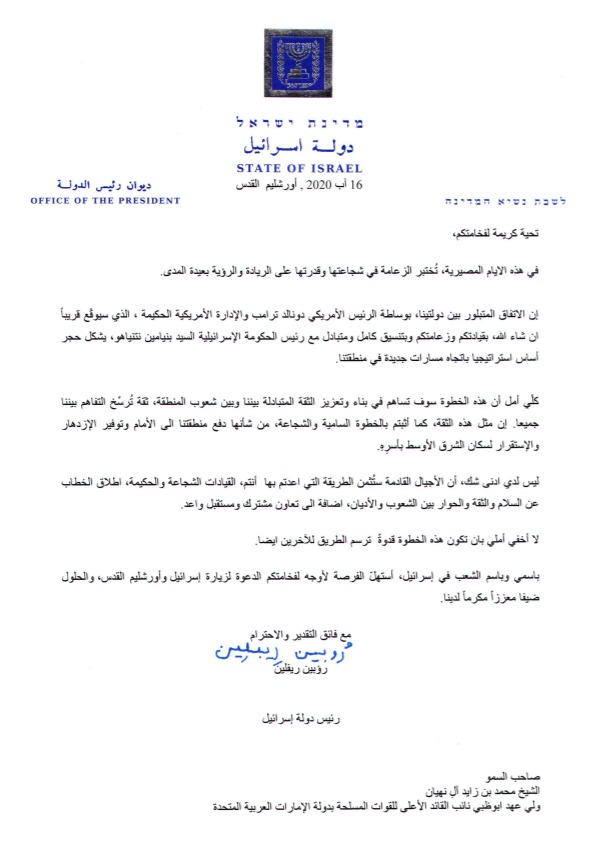 President Reuven Rivlin on Monday invited the United Arab Emirates’ de facto leader to visit Yerushalayim, praising his role in achieving a “noble and courageous” deal to normalize relations between Israel and the UAE.

Both countries announced on Thursday they would forge formal ties under a U.S.-sponsored deal whose implementation could recast Middle East politics ranging from the Palestinian issue to dealing with Iran, the common foe of Israel and Gulf Arabs.

The deal drew anger and dismay in much of the Arab world and Iran but a quiet welcome in the Gulf.

“In these fateful days, leadership is measured by its courage and ability to be groundbreaking and far-sighted,” President Rivlin wrote in a letter to Sheikh Mohammed bin Zayed al-Nahyan, the crown prince of Abu Dhabi.

“I have no doubt that future generations will appreciate the way you, the brave and wise leaders, have restarted the discourse on peace, trust, dialogue between peoples and religions, cooperation and a promising future,” Rivlin wrote.

“On behalf of the people of Israel and (me) personally, I take this opportunity to extend an invitation to Your Highness to visit Israel and Jerusalem and be our honored guest,” Rivlin said in the letter, which his spokesman released publicly.

“I am hopeful,” Rivlin’s letter went on, “that this step will help build and strengthen the trust between us and the peoples of the region, a trust that will promote understanding between us all.

“Such trust, as demonstrated in the noble and courageous act, will set our region forward, bring economic well-being and provide prosperity and stability to the people of the Middle East as a whole.”

Palestine Liberation Organization official Wassel Abu Youssef condemned Rivlin’s invitation, saying “the visit of any Arab official to Jerusalem through the gate of normalization is rejected.”

Any such top-level Arab visit could be politically explosive given the internationally disputed status of Yerushalayim.