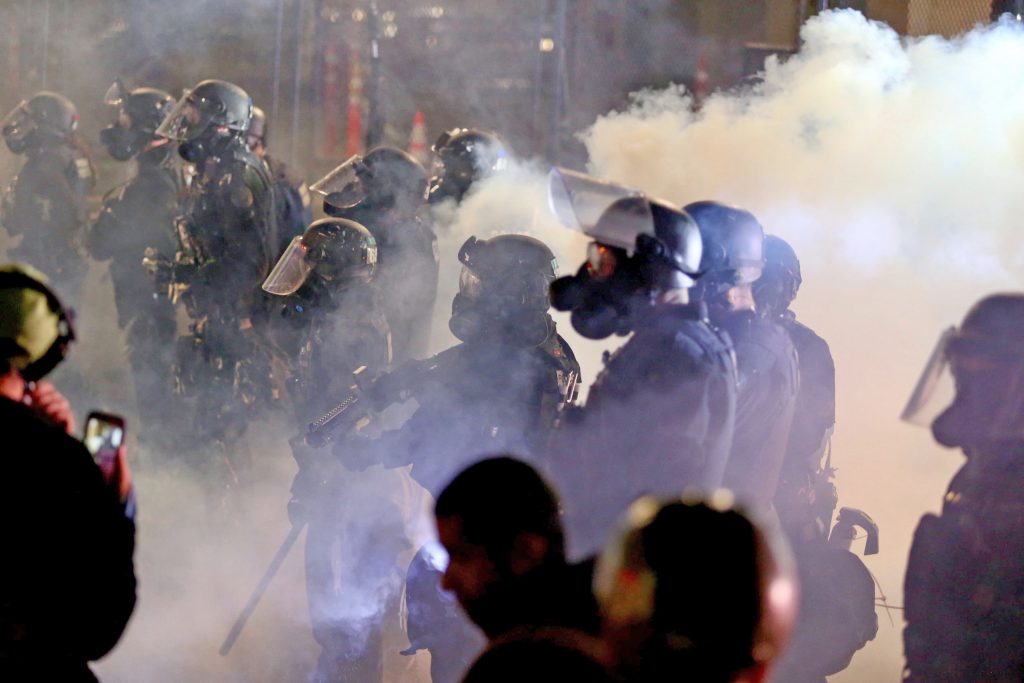 A riot was declared in Oregon’s biggest city as protesters demonstrated outside a law enforcement building early Sunday, continuing a nightly ritual in Portland.

Protesters had thrown “softball size” rocks, glass bottles and other objects at officers, police said. The department also said security cameras had been spray painted and other vandalism occurred.

The actions came after what started as a peaceful protest, with demonstrators chanting “take it to the streets!”

Saturday afternoon, a rally by a small group of alt-right demonstrators quickly devolved as they traded paint balls and pepper spray with counterprotesters.

About 30 people were participating in the Patriot Prayer rally in front of the Multnomah County Justice Center. Several were armed with automatic weapons, KOIN-TV reported.

A KOIN photojournalist reported hearing at least two gunshots at the garage. Police said in a statement that “a person allegedly fired a gun.” Portland police Lt. Greg Pashley told The Oregonian/OregonLive that the department would investigate.

Earlier in the day, police said they made four arrests overnight as they dispersed a protest that was headed toward the offices of the police union.

The bureau declared the demonstration of a couple hundred people an unlawful assembly Friday night, saying people were throwing fireworks, golf balls and chunks of concrete at officers. Officers said they used crowd control munitions but no CS tear gas to disperse the crowd.

Demonstrations, often violent, have happened nightly in Portland for more than two months following the killing of George Floyd by Minneapolis police. Participants have repeatedly broken into the offices of the Portland Police Association, vandalized them and set fires.