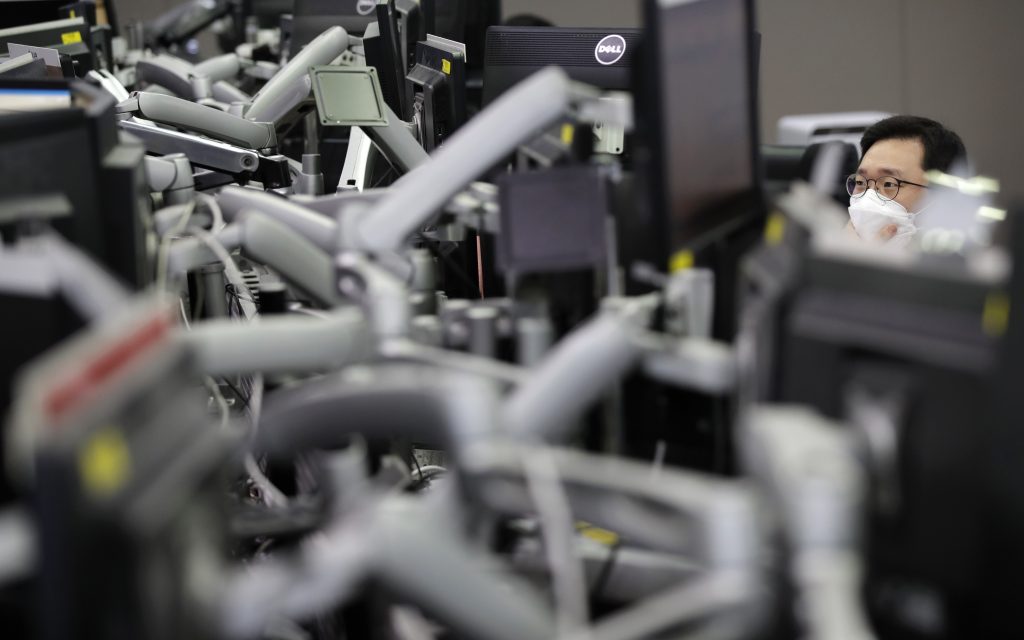 Asian shares were mostly higher in cautious trading Friday as investors studied fresh data out of China showing that its recovery remains subdued.

China reported that factory output rose 4.8% from a year earlier in July, on a par with June’s increase. Retail sales fell 1.1%, as consumers remain cautious.

Malaysia reported, meanwhile, that its economy contracted at a real annual rate of 16.5% in April-June, its worst downturn on record. The Malaysian central bank forecast that the economy will return to growth in 2021.

Widespread worries persist about a second, or third, surge in coronavirus cases in many places. Another afternoon fade for stocks left most benchmarks on Wall Street lower.

Trade tensions between the U.S. and China are also on investors’ minds as so much of Asian regional growth depends on exports to those giant economies.

The two sides are due to hold talks online later Friday on a trade deal reached in January that brought a truce in their bruising tariff war.

The data on July retail sales, industrial production and investment painted a mixed picture of some recovery amid the uncertainty. “We are seeing Asia markets broadly assuming a mixed tone, taking a measured stance between the U.S. fiscal stimulus stalemate and the Chinese data and U.S.-China trade talks,” said Jingyi Pan, market strategist at IG in Singapore.

Overnight, the S&P 500 dipped 0.2% to 3,373.43. At one point during the day, it climbed above 3,386.15. That’s the record closing level it set in February, before investors began to understand the degree of devastation the new coronavirus pandemic would inflict on the global economy.

It was just the second loss for the S&P 500 in the last 10 days. The index began stumbling in the early afternoon, as Treasury yields were accelerating following an auction of 30-year bonds by the U.S. government and a report showing that 963,000 U.S. workers filed for unemployment benefits last week. That’s an incredibly high number, but still the lowest tally since March.

Economists said the drop in jobless claims, which was better than the market was expecting, is an encouraging step. But they also cautioned that it could be more of an outlier than a trend, and more data reports are needed to confirm it.

Benchmark U.S. crude rose 16 cents to $42.40 a barrel in electronic trading on the New York Mercantile Exchange. It fell 43 cents to $42.24 per barrel on Thursday. Brent crude, the international standard, added 18 cents to $45.14 a barrel.