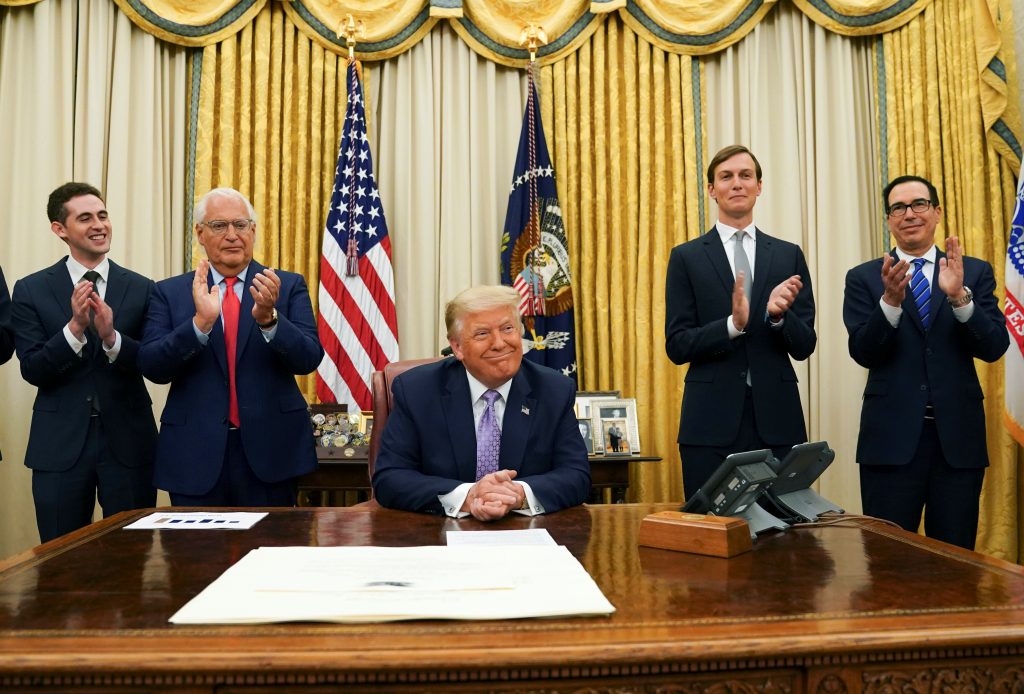 Israel and the United Arab Emirates reached a historic peace deal on Thursday that will lead to a full normalization of diplomatic relations between the two Middle Eastern nations in an agreement that President Donald Trump helped broker.

Under the agreement, Israel has agreed to suspend applying sovereignty to areas of Yehudah and Shomron that it has been discussing annexing, senior White House officials told Reuters.

The peace deal was the product of lengthy discussions between Israel, the UAE and the United States that accelerated recently, White House officials said.

The agreement was sealed in a phone call on Thursday between Trump, Prime Minister Binyamin Netanyahu and Sheikh Mohammed Bin Zayed, crown prince of Abu Dhabi.

The officials described the agreement, to be known as the Abraham Accords, as the first of its kind since Israel and Jordan signed a peace treaty in 1994. It also gives Trump a foreign policy success as he seeks re-election on Nov. 3.

A joint statement issued by the three nations said the three leaders had “agreed to the full normalization of relations between Israel and the United Arab Emirates.”

“This historic diplomatic breakthrough will advance peace in the Middle East region and is a testament to the bold diplomacy and vision of the three leaders and the courage of the United Arab Emirates and Israel to chart a new path that will unlock the great potential in the region,” the statement said.

Delegations from Israel and the United Arab Emirates will meet in the coming weeks to sign bilateral agreements regarding investment, tourism, direct flights, security, telecommunications and other issues, the statement said.

The two countries are expected soon to exchange ambassadors and embassies.

The statement said that as “a result of this diplomatic breakthrough and at the request of President Trump with the support of the United Arab Emirates, Israel will suspend declaring sovereignty” over areas of the West Bank that were envisioned in the U.S. peace plan unveiled by Trump in January.

“Israel for the foreseeable future will be focused on building this relationship and pursuing all the advantages that can come from having this new relationship with this country, and we also breaks the ice for doing more normalizations and peace agreements with other regional players as well,” one White House official told Reuters.

The agreement envisions giving Muslims greater access to the Al-Aqsa Mosque in the Old City of Yerushalayim by allowing them to fly from Abu Dhabi to Tel Aviv, White House officials said.

The joint statement said the United Arab Emirates and Israel will immediately expand and accelerate cooperation regarding the treatment of and the development of a vaccine for the novel coronavirus amid the pandemic.