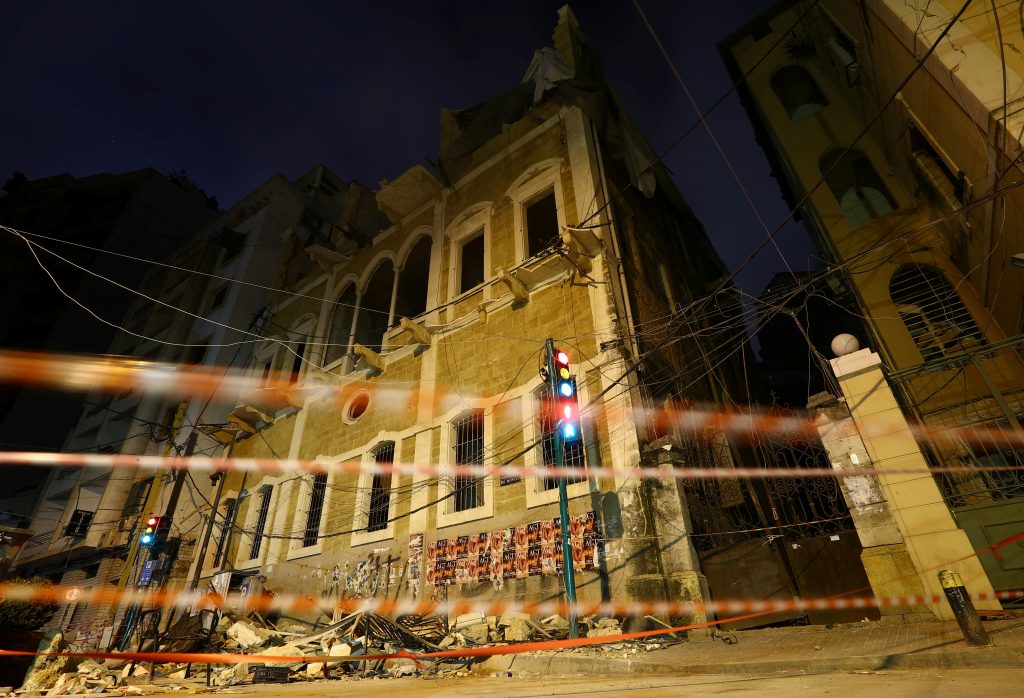 Senior U.S. official David Hale is expected in Beirut later on Thursday to stress the urgent need for financial and governance reforms, ending endemic corruption and bringing transparency, among other messages, the U.S. Embassy said.

The Aug. 4 blast at a warehouse storing highly explosive material in Beirut port injured some 6,000, left around 300,000 without habitable housing and wrecked swaths of the city, which was already in a deep financial crisis.

The authorities say the blast was caused by more than 2,000 tons of ammonium nitrate stored for years without safety measures.

Roads to the UNESCO Palace on the southern outskirts of the capital, where parliament has met during the COVID-19 pandemic, were blocked with metal gates in anticipation of the protest by demonstrators furious at a political elite they blame for the blast.

As two cars with tinted windows passed through one of the barricades towards the UNESCO Palace, a small group of protesters hit the vehicles with Lebanese flags.

Others, angry at the lawmakers, said they had stayed away from the building in anticipation of the security cordon.

Some 30-40 people are still missing more than a week after the blast.

Outrage at the explosion has fueled protests in which hundreds of people have been injured in confrontations between security forces and demonstrators. The government of Prime Minister Hassan Diab resigned earlier this week.

The parliamentary session started with a minute of silence.  The agenda includes a discussion of a state of emergency declared by the government, said a senior political source. The resignation of eight MPs who quit after the blast is also expected to be confirmed.

But Parliament Speaker Nabih Berri, a pillar of the sectarian elite, also “wants to give a political message – that the parliament exists – despite all this talk about early elections and the resignations of MPs,” said the source.

Humanitarian aid has poured in but foreign countries have made clear they will not provide funds to help pull Lebanon from economic collapse without action on long-demanded reforms to tackle systemic graft, waste, mismanagement and negligence.

Authorities have estimated losses at $15 billion, a bill Lebanon cannot pay: It defaulted on its enormous sovereign debt in March, citing critically low foreign currency reserves. The government’s talks with the International Monetary Fund for a bailout had stalled.

Politicians are in early consultations over forming a new Cabinet, a complicated process in a country riven by political divisions and governed by a sectarian power-sharing system.

The government, which stays on in a caretaker capacity, came to office in January with backing from parties including the heavily armed, Iran-backed Shiite group, Hezbollah, Lebanon’s most powerful party. Together with its allies, they have a majority of seats in parliament.

The United States proscribes Hezbollah as a terrorist group.

U.S. Under Secretary for Political Affairs Hale “will underscore America’s willingness to support any government that reflects the will of the people and is genuinely committed to and acting upon such a reform agenda,” the U.S. Embassy said.