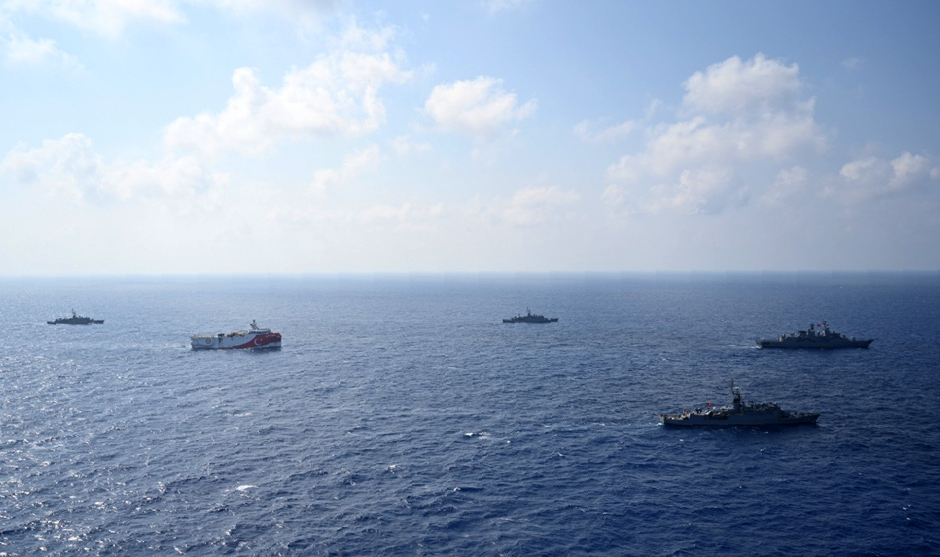 A Turkish seismic research vessel has begun surveying for energy resources in contested areas of the eastern Mediterranean, Turkey’s energy minister said Wednesday, amid an escalation of tensions between rivals Greece and Turkey over oil and gas exploration rights.

Turkey’s seismic surveying ship, Oruc Reis, was “taking the x-ray of our seas,” Energy and Natural Resources Minister Fatih Donmez said on Twitter. He said the the vessel had also lowered 1,750 kilometers (1,087 miles) of seismic cables into the Mediterranean.

Turkey dispatched the Oruc Reis and two support vessels to undertake seismic research for energy resources in the eastern Mediterranean in an area Greece says is on its continental shelf. The move reignited tensions between NATO allies Greece and Turkey, both of which have warships shadowing the Turkish research vessel.

Greece has called on Turkey to withdraw vessels from the area. Turkey said Tuesday it would not back away from its search activities, adding that it plans to issue new exploration licenses for the area despite an escalating dispute with Greece over drilling rights.

Greek Foreign Minister Nikos Dendias is scheduled to meet with U.S. Secretary of State Mike Pompeo on Friday in Vienna, his ministry said Wednesday. Talks are to focus on Turkey’s actions and developments in the eastern Mediterranean.

European Union foreign policy chief Josep Borrell tweeted on Wednesday that he was calling an extraordinary Foreign Affairs Council meeting for Friday, to discuss the situation in the eastern Mediterranean, as well as the presidential elections in Belarus and developments in Lebanon after a massive deadly explosion there.

Greece had called for the emergency meeting over what it termed the “growing Turkish provocation and delinquency,” and Dendias would be participating via video link from Vienna.

Turkey announced that the Oruc Reis would be operating in the Mediterranean Sea between Cyprus and Greece until Aug. 23. The vessel arrived in the area Monday morning, escorted by Turkish warships. Greek warships were in the area monitoring the Oruc Reis, and the military was on alert, officials said.

Relations between Greece and Turkey have traditionally been taut, and the neighbors have long been at loggerheads over a slew of territorial disputes. The two have come to the brink of war three times since the mid-1970s, including once over drilling exploration rights in the Aegean Sea that separates the two countries. Recent discoveries of natural gas and drilling plans across the eastern Mediterranean have led to renewed tension.

Ankara was angered by a deal Greece signed with Egypt on Thursday delineating their bilateral maritime boundaries and exclusive economic zones for rights to the exploitation of resources. Turkish officials said the deal came as Turkey and Greece were making progress in informal talks brokered by Berlin.

Last year Turkey signed a similar deal with the U.N.-backed Libyan government in Tripoli, sparking outrage in Greece, Egypt and Cyprus, which said the agreement infringed on their economic rights in the Mediterranean. The EU said the deal was a violation of international law that threatened regional stability.

At the heart of the issue is how a country’s continental shelf is calculated and whether islands should be included in the calculation. Turkey argues they should not, a position that Greece says violates international law.