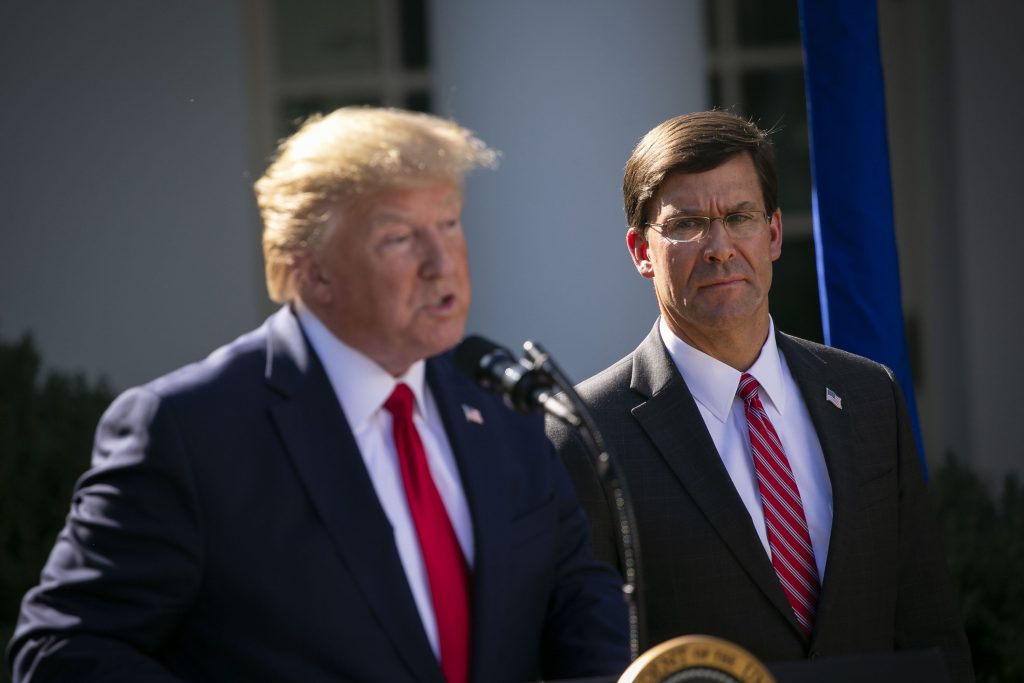 President Donald Trump has privately said that he intends to replace Secretary of Defense Mark Esper after the November election, according to people familiar with internal discussions.

One person said Esper has told people close to him that he intends to leave regardless of the election’s outcome, meaning he could exit the administration about two months before Trump does, if the president loses.

Trump has been frustrated that Esper, who became secretary in July 2019, has not done more to publicly defend him on key issues, including reports that Russia paid Taliban fighters “bounties” for the killing of U.S. troops in Afghanistan.

Trump was also angered that Esper in June publicly opposed the idea of deploying active-duty military to contain nationwide protests over racism. He confronted his defense secretary June 3 at the White House after Esper held a news conference in which he said that using active-duty military forces to conduct law enforcement within the U.S. is “a matter of last resort” and that the National Guard was better suited to the task, people familiar with the matter said.

The pushback from Esper followed Trump’s threat to send military forces to cities and states that did not quell violence from the protests, which were sparked by the death of George Floyd in Minneapolis police custody.

Asked at the time whether the president still had confidence in Esper, White House press secretary Kayleigh McEnany responded that “should the president lose faith, we will all learn about that in the future.”

White House spokesman Judd Deere said Wednesday: “We have no personnel announcements at this time nor would it be appropriate to speculate about changes after the election or in a 2nd term.”

“He first swore an oath to the Constitution as a West Point cadet over 38 years ago, and has done so many times throughout his adult life, in both war and peace, in uniform and out of uniform,” Hoffman said. “He continues that same commitment to duty, honor, and country today, recognizing that he serves the nation and leads the men and women of this department as secretary of defense at the pleasure of the president.”

An official close to Esper, who asked not to be identified, added that Esper is committed to serving as long as Trump wants him to.

Before pushing back on deploying troops to cities with large-scale protests, Esper and Gen. Mark Milley, chairman of the Joint Chiefs of Staff, had joined Trump on a walk through a public park in front of the White House on June 1, after it had been cleared of peaceful protesters, a move that provoked a bipartisan outcry in Congress and from former military leaders.

Esper, though, has shown more willingness than his predecessor to work with Trump on issues such as drawing down forces in Syria, Afghanistan and Germany, sending U.S. troops to the border with Mexico, and shifting funding for military construction and weapons programs to help build a border wall.

Since taking office, Esper has also made himself and top officials more available to the media, a practice that had been limited under Trump’s first defense secretary, Jim Mattis. Pentagon officials brief reporters on an almost-weekly basis now and, during the early stages of the coronavirus pandemic, addressed reporters multiple times per day on occasion.

President Bill Clinton’s first secretary of defense, Les Aspin, served one year and two weeks in the position, the shortest since the Nixon administration. If he departs in November after the election, Esper will have been in the role for about one year and four months.