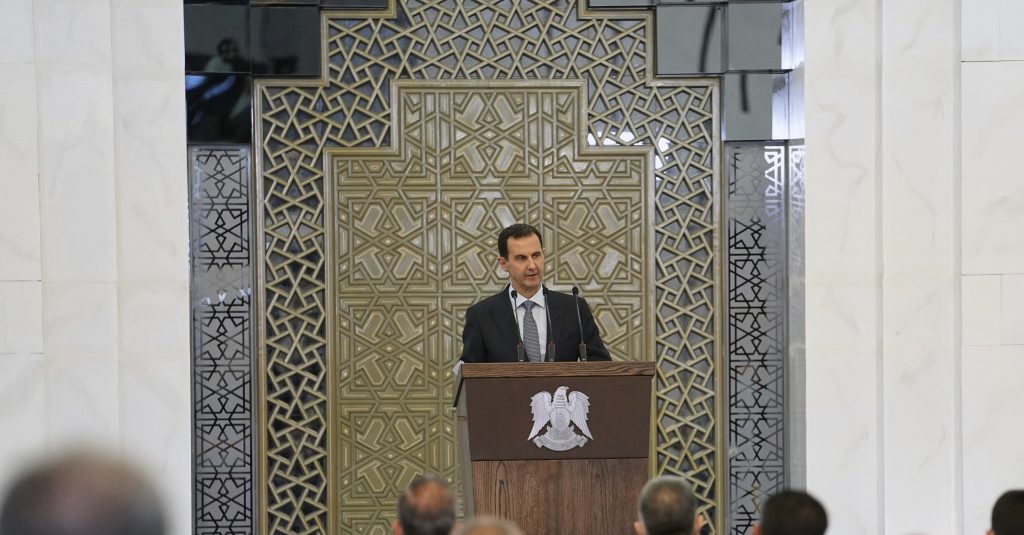 Syrian President Bashar Assad interrupted a speech he was giving to parliament Wednesday, telling a room full of lawmakers that he needed to “sit down for a minute” after suffering a brief drop in blood pressure.

Assad, 54, was half an hour through his speech when he began appearing tired and halted his speech twice to take a sip of water from a glass in front of him. He was speaking about U.S. sanctions on Syria and the economic crisis in the war-ravaged country when he told his audience, “My blood pressure has dropped and I need to drink water.”

Shortly afterwards, he said, “I need to sit for a minute if you don’t mind,” before exiting the room.

It was not clear how long he was away but when he returned, Assad, a trained eye doctor, joked that “doctors are the worst patients.” He was greeted by applause from the lawmakers before him.

“I haven’t eaten since yesterday afternoon. I have no sugar or salt and this happens,” he added.

Assad spoke from a podium to the members of parliament wearing masks and social distancing, seated at least 2 meters (6 feet) apart in a huge hall.

Syria has seen a rising number of coronavirus infections recently, although the overall reported numbers remain low with 1,327 confirmed cases and 53 deaths. Limited testing facilities and Syrian government control over pandemic statistics have led to concerns that the real number of cases is much higher than what’s being reported.

Earlier, the presidency’s office said the speech was halted for “several minutes” because of a “mild” case of low blood pressure the president suffered, after which he continued the speech as normal.

The presidency’s Facebook page posted that the speech would be aired later Wednesday. It did not provide further details. Assad, 54, is not known to have any specific health condition.

Assad gave the speech Wednesday on the occasion of the first parliament session after elections were held last month. The vote was the third to take place in Syria since the country’s conflict began in 2011.

The elections also coincided with Syria’s worst economic crisis and a currency crash, which has dragged more of the country’s population into poverty.