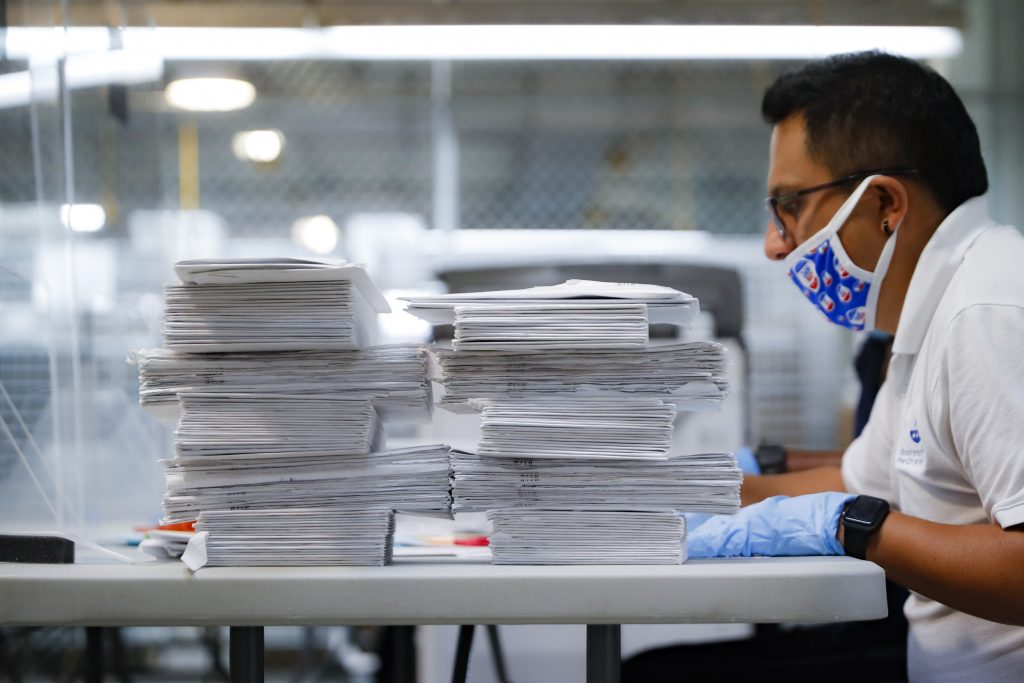 Election officials are warning that cash-strapped New York has a lot of work to do before Nov. 3 to ensure it can handle an even bigger flood of absentee ballots in light of a surge in mail-in voting that fueled a six-week delay for results of the June primary.

New York’s roll-out of expanded absentee voting this spring has fueled complaints of voter disenfranchisement and worries that voters are growing more distrustful of mail-in voting ahead of November. Election commissioners used a Tuesday legislative hearing to urge lawmakers facing massive revenue shortfalls to provide more funding and time for election workers to mail, process and count ballots in November.

Gov. Andrew Cuomo in April allowed voters to vote by absentee ballots if they feared the spread of COVID-19 at polling sites. He announced the state would mail applications for absentee ballots with prepaid postage to all registered voters.

Election officers worked through the pandemic to process 1.8 million requests for absentee ballots in a primary that saw nearly 40% of votes cast by absentee — a monumental sum in a state whose long-restrictive absentee voting system involves fewer than one in ten voters in typical elections.

Eight million voters are expected to vote in November, and up to half could vote by absentee, officials said Tuesday.

“I would not be surprised if you don’t have clear winners in close races until well after Thanksgiving,” State Board of Elections Co-Executive Director Todd Valentine said in written testimony.

“The volume of discarded ballots is wholly unacceptable regardless of any possible explanation,” said Senate Deputy Leader Michael Gianaris, a Democrat, adding: “more needs to be done.”

In New York City, 23% of roughly 400,000 absentee ballots were deemed invalid in June, according to City Board of Elections Executive Director Michael Ryan Tuesday.

About 12,500 ballots from Brooklyn, Queens and Manhattan voters were disqualified in one Congressional primary, according to a federal lawsuit filed by Democrat Suraj Patel. He has declined to concede to incumbent Rep. Carolyn Maloney, and a judge ordered the counting of at least 1,000 ballots disputed in the suit.

Ryan said the lack of a voter’s signature was the most common reason for invalid ballots.

Commissioner Douglas Kellner, a Democrat, said New York may add a “big red mark” to make it more clear where voters must sign.

Ballots can also get tossed if they aren’t sealed properly in an inner envelope, lack a postmark, or have a stray mark.

In Brooklyn, postal workers failed to postmark all ballots — contrary to Postal Service policy. New York would accept unpostmarked ballots it receives a day after the election under a bill lawmakers passed in July.

Lawmakers and commissioners expressed worry about New York’s increased reliance on the postal service, whose new postmaster general denies his agency is slowing down election mail amid revenue woes. New York could use more drop boxes for ballots, said Valentine.

“A significant portion of our elections will be administered by an entity over which the Board of Elections has no control,” state elections commissioner Peter Kosinski, a Republican, said.

The Postal Service can’t guarantee it can return ballots by mail in time to be counted under New York’s deadlines, general counsel Thomas Marshall told the state in a July 30 letter.

New York lets voters request absentee ballots seven days before an election. But at least 15 days would provide more time for ballots to be requested, sent to voters and returned, according to state elections board co-executive director Robert Brehm.

New York received $20 million in federal funding and provided $4 million in state matching funds for elections this year. Commissioners are calling for as much as $50 million for staff, training, additional poll sites, postage, ballot scanners and protective gear ahead of the November election.

“More resources, more personnel, more funding, and more patience would help,” Kosinski said in written testimony. “It’s easy to criticize us, but it’s not easy to do our jobs.”