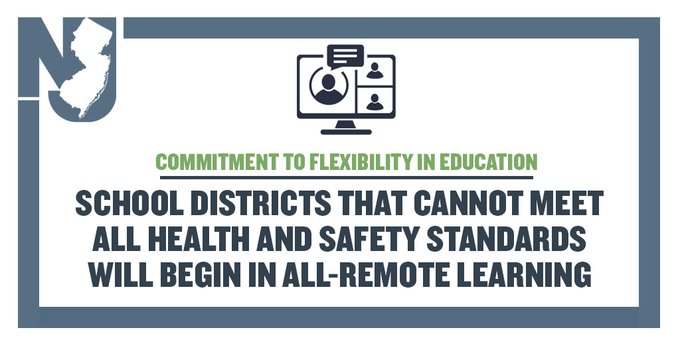 New Jersey Gov. Phil Murphy said Wednesday that schools that cannot meet health and safety guidelines for an in-person start to the academic year can go with an all-remote option.

The first-term Democratic governor said he will also soon sign an executive order that paves the way for the state’s roughly 600 schools to begin in-person instruction in September.

The ability for some schools to start entirely remotely is a change from the governor’s June guidance, which required all schools to have in-person instruction.

Then, in July, Murphy approved an option for parents to request all-remote learning for their children.

Wednesday’s decision means some school districts can begin with just virtual learning. It’s unclear how many districts that would entail, but Murphy and interim Education Commissioner Kevin Dehmer said most schools have already picked a hybrid option, meaning some in-person and some remote instruction.

Murphy said the change stemmed from “our willingness to listen” to stakeholders.

The disruption stems from the COVID-19 outbreak, which led to three months of remote learning in the previous academic year.

The health and safety guidelines include maintaining social distance and mask-wearing for staff and students.

COVID-19 BY THE NUMBERS

There were nearly 500 new positive cases reported overnight, bringing the total to nearly 186,000. There were nine new confirmed deaths, putting the toll at 14,046 confirmed fatalities, plus an estimated 1,839 probable deaths.

The rate of transmission continued to hover below 1 at 0.92. The figure measures the number of people to whom an infected person transmits the virus.

The testing positivity rate was 2.09%.