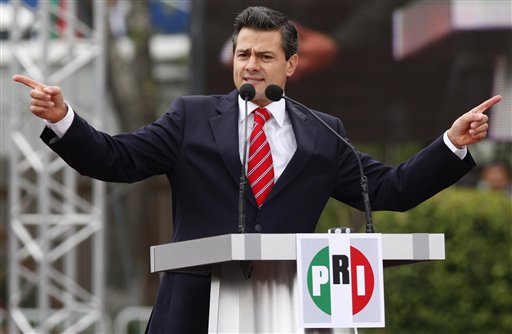 The Mexico Attorney General’s Office said Tuesday it is investigating allegations that former President Enrique Peña Nieto partially funded his 2012 election campaign with bribes from the Brazilian construction company Odebrecht, which has admitted to involvement in widespread corruption in Latin America.

Attorney General Alejandro Gertz Manero said in a video statement that a former head of Mexico’s state-run oil company has accused Peña Nieto and his finance secretary, Luis Videgaray, of instructing him to pay campaign consultants with more than $4 million in bribes from Odebrecht.

“There were a series of bribes for a quantity of more than 100 million pesos, which were fundamentally used for the 2012 campaign for the presidency of the republic,” Gertz Manero said. “And those who were later president and his finance secretary are the people who this individual presenting the complaint says ordered that the money be given to various foreign electoral advisers who collaborated and worked on the campaign of these two people.”

That individual was Emilio Lozoya, the former director of Pemex under Peña Nieto, who was extradited from Spain last month after spending months on the run.

Neither Peña Nieto nor Videgaray immediately addressed the accusations.

Ever since Lozoya was captured in southern Spain in February, anticipation has been building around what he could tell Mexican prosecutors if willing. That expectation grew in July when the Attorney General’s Office announced it had reached an agreement with Lozoya in which he would not fight extradition and would return ready to talk about Odebrecht bribes and a ramshackle fertilizer plant that Pemex bought at a premium.

Now less than a month since his return to Mexico, Lozoya apparently has pointed at the former president.

For President Andrés Manuel López Obrador, who campaigned on eradicating corruption, it would be a signature accomplishment if Peña Nieto were prosecuted. López Obrador, however, has been careful to say that while he would pursue corruption in all of its appearances, he did not come into office seeking revenge against previous presidents.

He had said repeatedly that he would hold a public vote before pursuing a former president and only proceed if he had the backing of the people.

Federico Estevez, a political science professor at the Autonomous Technological Institute of Mexico, said he is not sure López Obrador was initially pursuing Peña Nieto.

“Maybe (López Obrador) was willing to let it go if things had gone better,” Estevez said. “His line was always ‘Let’s focus on building the future, not the past’ … but now there is no future to build, we’re going backwards.”

Estevez was referring to the coronavirus pandemic, which continues to lash Mexico and has pushed an already stagnant economy into a deepening recession that threatens to shred López Obrador’s ambitious domestic agenda.

That makes a strong potential win on his corruption promises look much more attractive.

Lozoya also alleged that Peña Nieto and Videgaray directed him to pay bribes to six federal lawmakers — one deputy and five senators — for their votes on controversial structural reforms in 2013 and 2014, Gertz Manero said.