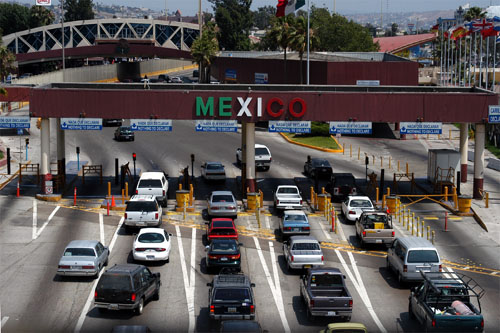 A Trump administration proposal to stop U.S. citizens and permanent residents from crossing into the United States through the Mexico border remains in a draft stage and is saddled with doubts about the legal and logistical challenges of keeping Americans from reentering their own country, officials said Tuesday.

While the executive branch has broad authority to close border crossings or restrict travel in the event of a spreading disease outside U.S. territory, it is less clear how the Trump administration could justify such restrictions on U.S. citizens when infection already is spreading rampantly inside the United States.

Administration officials familiar with the internal discussions said some Trump administration officials want to stem the spread of the novel coronavirus by reducing the hundreds of thousands of daily border crossings by U.S. citizens and green-card holders, many of whom reside in Mexico and work in the United States.

The Trump administration already has tried to ban nonessential travel across the border, but it has little ability to enforce measures that would bar Americans from entering. About 400,000 people continue to go back and forth each day, officials said, about half the pre-pandemic volume.

Blocking those U.S. citizens and permanent residents from returning would be an extraordinary step, but President Donald Trump has long viewed border closures and travel restrictions as a demonstration of strength and executive prerogative. Trump has repeatedly pointed to his Jan. 31 order halting travel from China in defending his handling of the pandemic.

The difference now is that the United States has the world’s biggest outbreak, with more than 5 million confirmed coronavirus cases. Medical experts have warned the administration that barring American citizens from entering their own country would do little to change that.

One Department of Homeland Security (DHS) official familiar with the discussions played down the border proposal, saying it likely would be more of a travel advisory than a rigidly enforced ban, similar to Democratic New York Gov. Andrew Cuomo’s call for out-of-state visitors to quarantine for 14 days.

“We know it would be very hard to police,” said the official, who spoke on the condition of anonymity because the person was not authorized to discuss it publicly. “But in some ways there is a benefit to having an order in place, even if everyone knows you can’t enforce it, because the vast majority of Americans will follow the rules.”

Some administration critics have doubted the seriousness of the proposal, because border officials would have to establish a process for screening travelers for illness and coming up with parameters for denying their entry. Public health authorities could establish a more obligatory quarantine system, but denying Americans the ability to enter the United States on the basis of their mere presence in Mexico would land quickly in federal court.

“Any proposal that would bar citizens or lawful permanent residents from returning to the United States would be unconstitutional,” said Lee Gelernt, a lawyer at the American Civil Liberties Union who has successfully challenged several of the Trump administration’s border and immigration measures.

Officials at the White House and the DHS have been discussing such restrictions for weeks, according to two officials involved in the talks. They said the measures probably would be issued in the form of an order by the Centers for Disease Control and Prevention, not unlike the public health emergency used to implement a policy of mass expulsions for unauthorized migrants attempting to enter.

Two officials said White House immigration adviser Stephen Miller is not behind the proposal and has been focused instead on the Trump administration’s “law-and-order” campaign in Portland, Ore., and other U.S. cities. The proposal is not being actively considered at the top levels of the White House, one official said, cautioning that it has not gone through the “traditional White House policy process.”

The initiative is “not necessarily a good election move for us,” one official said. “I can’t imagine we would actually do it.”

Some of the U.S. cities and counties along the Mexico border have been among the hardest-hit by the pandemic, especially in Arizona and the Rio Grande Valley in South Texas. Those areas could be hurt even more by border closures, because they depend heavily on cross-border trade and many essential workers – including in hospitals and health care – who live in Mexico.