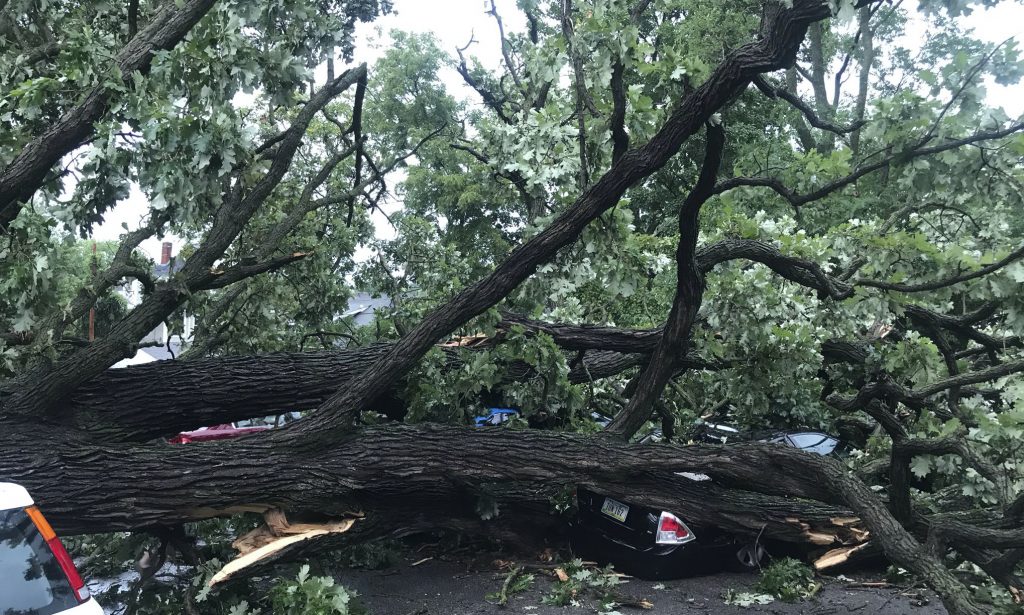 A rare storm packing 100 mph winds and with power similar to an inland hurricane swept across the Midwest on Monday, blowing over trees, flipping vehicles, causing widespread property damage and leaving hundreds of thousands without power as it turned toward Chicago.

The storm known as a derecho lasted several hours as it tore across eastern Nebraska, Iowa and parts of Wisconsin, had the wind speed of a major hurricane, and likely caused more widespread damage than a normal tornado, said Patrick Marsh, science support chief at the National Weather Service’s Storm Prediction Center in Norman, Oklahoma.

It’s not quite a hurricane. It has no eye and its winds come across in a line. But the damage it is likely to do spread over such a large area is more like an inland hurricane than a quick more powerful tornado, Marsh said. He compared it to a devastating Super Derecho of 2009, which was one of the strongest on record and traveled more than 1,000 miles in 24 hours, causing $500 million in damage, widespread power outages and killing a handful of people.

“This is our version of a hurricane,” Northern Illinois University meteorology professor Victor Gensini said in an interview from his home about 15 minutes before the storm was about to hit. Minutes later he headed to his basement for safety as the storm took aim at Chicago, starting with its suburbs.

Gensini said this derecho will go down as one of the strongest in recent history and be one of the nation’s worst weather events of 2020.

Several people were injured and widespread property damage was reported in Marshall County in central Iowa after 100 mph winds swept through the area, said its homeland security coordinator Kim Elder.

She said the winds blew over trees, ripped road signs out of the ground and tore roofs off of buildings.

“We had quite a few people trapped in buildings and cars,” she said. She said the extent of injuries is unknown and that no fatalities have been reported.

Elder said some people reported their cars flipping over from the wind, having power lines fall on them and getting injured when hit by flying debris. Dozens of cars at one factory had their windshields blown out. Buildings have also caught on fire, she said.

Marshalltown Mayor Joel Greer declared a civil emergency, telling residents to stay home and off the streets so that first responders can respond to calls.

MidAmerican Energy said nearly 101,000 customers in the Des Moines area were without power after the storm moved through the area. Reports from spotters filed with the National Weather Service in Des Moines had winds in excess of 70 mph.

Roof damage to homes and buildings were reported in several Iowa cities, including the roof of a hockey arena in Des Moines.

Across the state, large trees fell on cars and houses. Some semi-trailers flipped over or were blown off highways.

Farmers reported that some grain bins were destroyed and fields were flattened, but the extent of damage to Iowa’s agriculture industry wasn’t immediately clear.

MidAmerican spokeswoman Tina Hoffman said downed trees are making it difficult in some locations for workers to get to the power lines. In some cases, power line poles were snapped off.

“It’s a lot of tree damage. Very high winds. It will be a significant effort to get through it all and get everybody back on,” she said. “It was a big front that went all the way through the state.”

“We have damage to homes and businesses, including siding and roofs damaged,” he said. “Trees and power lines are down throughout the entire city.”

Buelow said residents should stay home so crews can respond to “potentially life-threatening calls.” Tens of thousands of people in the metro area were without power.

“Right now, it’s making a beeline for Chicago,” Marsh said on Monday mid-afternoon. “Whether or not it will hold its intensity as it reaches Chicago remains to be seen.”

But the environmental conditions between the storm and Chicago are the type that won’t likely diminish the storm, Marsh said. It will likely dissipate over central or eastern Indiana, he said.

What happened is unstable super moist air has parked over the northern plains for days on end and it finally ramped up Monday morning into a derecho.

“They are basically self-sustaining amoebas of thunderstorms,” Gensini said. “Once they get going like they did across Iowa, it’s really hard to stop these.”

Derechos, with winds of at least 58 mph, occur about once a year in the Midwest. Rarer than tornadoes but with weaker winds, derechos produce damage over a much wider area.

“Once that rain-cooled air hit the ground, it surged over 100 miles, sending incredibly strong winds over the area,” Barjenbruch said.

The Omaha Public Power District reported more than 55,500 customers without power in Omaha and surrounding communities.

The weather service’s Marsh said there’s a huge concern about power outages that will be widespread across several states and long lasting. Add high heat, people with medical conditions that require power and the pandemic, “it becomes dire pretty quickly.”