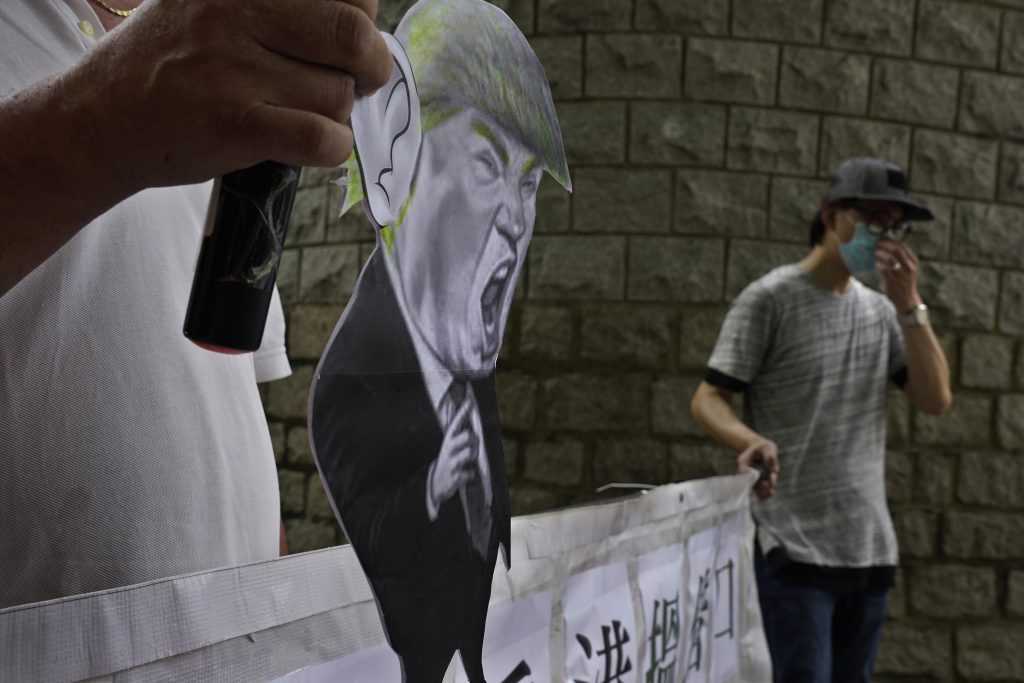 The U.S. on Friday imposed sanctions on Hong Kong officials, including the pro-China leader of the government, accusing them of cooperating with Beijing’s effort to undermine autonomy and crack down on freedom in the former British colony.

The sanctions are the latest in a string of actions the Trump administration has taken targeting China as tensions between the two nations rise over trade, COVID-19 and other issues. President Donald Trump’s offensive against China comes as he assigns full blame to Beijing for the coronavirus outbreak in the U.S., deflecting criticism of his own handling of the pandemic that threatens his re-election.

The Treasury Department announced sanctions on Carrie Lam, the leader of the government in Hong Kong, and 10 other officials. The sanctions were authorized by an executive order that President Trump signed recently to levy penalties against China for its efforts to curtail anti-government protesters in Hong Kong.

Hong Kong has long enjoyed civil liberties not seen in mainland China because it is governed under a “one country, two systems” principle in place since it reverted to Chinese rule in 1997.

However, Beijing imposed a sweeping national security law on Hong Kong earlier this year, raising widespread concerns about the Chinese government cracking down on the anti-government protests.

“The recent imposition of draconian national security legislation on Hong Kong has not only undermined Hong Kong’s autonomy, it has also infringed on the rights of people in Hong Kong,” the Treasury Department said in a statement.

Treasury said the new law has allowed authorities in mainland China to operate with impunity in Hong Kong, has mandated “national security education” in Hong Kong schools, undermined the rule of law and laid the groundwork to censor individuals and outlets “deemed unfriendly” to China.

The U.S. said Lam, the chief executive of Hong Kong, is “directly responsible for implementing Beijing’s policies of suppression of freedom and democratic processes.” Last year, Lam pushed to allow citizens to be extradited to the mainland, setting off massive opposition demonstrations in Hong Kong, according to Treasury.

Hong Kong Commerce Secretary Edward Yau, who wasn’t sanctioned, called the sanctions “unreasonable and barbarous,” and said they would harm U.S. interests in the city, an Asian financial and shipping hub.

One of the sanctioned officials, the head of the central government’s liaison office in Hong Kong, said being included on the list shows that he has done what he should for his country.

“I don’t have a penny of assets abroad. Isn’t it in vain to impose ‘sanctions’? Of course, I can also send 100 U.S. dollars to Mr. Trump for freezing,” Luo Huining said in a statement on the office’s website.

Lam wrote on social media that the U.S. got her address wrong, listing the official address of her chief deputy instead. She noted that she was the deputy when she applied for her U.S. visa in 2016.

“By the way, my entry visa to the U.S. is valid until 2026,” Lam said. “Since I have no desire to visit this country, it looks like I can take the initiative to cancel it.”

He said she has worked with the Chinese Communist Party to kill Hong Kong’s autonomy and gut the rule of law. “These cowards betrayed the freedom-loving people of Hong Kong and deserve to pay a steep price,” he said.

Also sanctioned was Chris Tang, the commissioner of the Hong Kong Police Force, for allegedly “coercing, arresting, detaining, or imprisoning individuals” under the new security law, and the former police commissioner, Stephen Lo.

Friday’s action blocks all property or other assets that the individuals have within U.S. jurisdiction.

The Hong Kong government accused the U.S. of using Hong Kong as a pawn to create trouble in the China-U.S. relationship, calling the sanctions “blatant and barbaric interference” in China’s internal affairs.

It said that while national security is under the purview of the central government in any country, the new law authorizes local authorities in Hong Kong to be its main enforcer and specifies that human rights will be protected.

“These legal provisions, coupled with the rule of law and an independent judiciary in Hong Kong, are clearly ignored by relevant U.S. officials who have chosen to make unsubstantiated and sweeping comments to serve their own interest,” a government statement said.

“We will not be intimidated,” it said.

The remaining officials sanctioned were:

—John Lee Ka-chiu, secretary for security in Hong Kong who has introduced a new police unit that will have intelligence gathering and investigative abilities, to enforce the new security law.

“The Chinese Communist Party has made clear that Hong Kong will never again enjoy the high degree of autonomy that Beijing itself promised to the Hong Kong people and the United Kingdom for 50 years,” Secretary of State Mike Pompeo said in a statement. “President Trump has made clear that the United States will therefore treat Hong Kong as ‘one country, one system,’ and take action against individuals who have crushed the Hong Kong people’s freedoms.”

On Thursday, Trump ordered a sweeping but unspecified ban on dealings with the Chinese owners of some consumer apps. The Trump administration has expressed concern that Chinese social media services could provide American users’ personal information to Chinese Communist authorities.

The Trump administration already was embroiled in a tariff war with Beijing over China’s technology ambitions. Washington has blocked acquisitions of some U.S. assets by Chinese buyers and, due to security concerns, has cut off most access to American components and other technology for Huawei Technologies Ltd., a maker of smartphones and network equipment that is China’s first global tech brand.