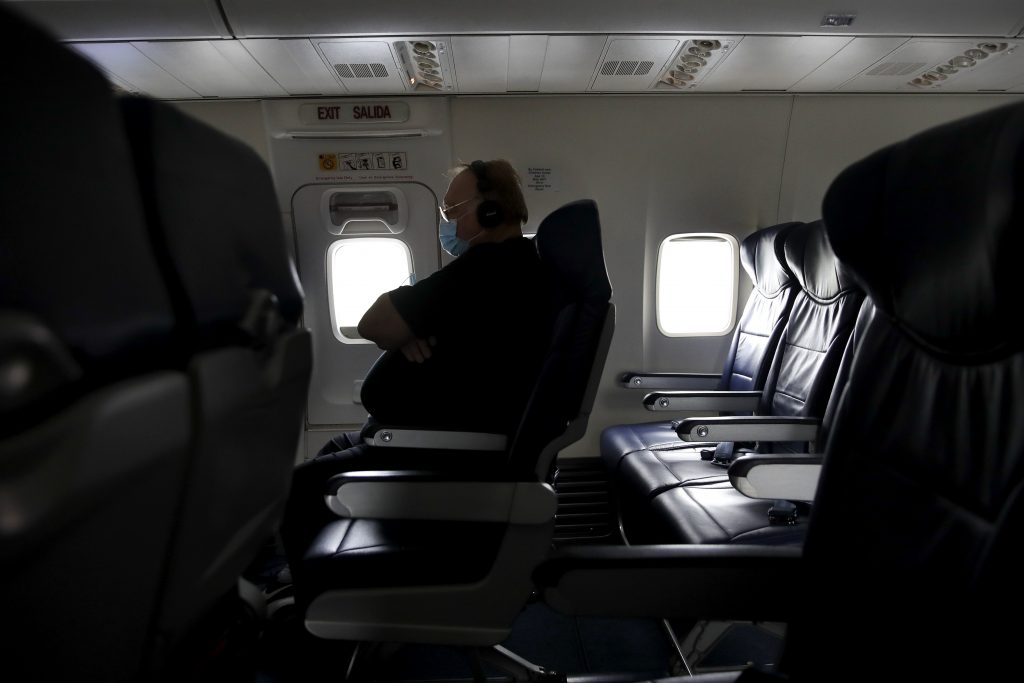 Devastated by the COVID-19 pandemic, some U.S. airlines are hoping to put potential passengers at ease by imposing tougher rules for mask wearing, including threats of banning fliers who refuse to cover their faces.

All of the nation’s largest carriers require that passengers wear masks or other face coverings during the flight and while boarding and exiting the planes, with an exemption for small children and allowances for briefly removing the masks to eat, drink or take medication.

“Our tougher policy shows how important this issue is to us and our guests,” Max Tidwell, Alaska Airlines’ vice president of safety and security, said in a statement Wednesday. “If you don’t wear a mask, you won’t be flying with us.”

Airlines can’t fine passengers for refusing to wear masks because the federal government does not require it. Transportation Secretary Elaine Chao has refused to support a nationwide mandate, saying she’ll leave it up to airlines.

But some airlines have taken it upon themselves to add the threat of banning passengers from future flights if they refuse to wear a mask. Delta Air Lines has gone so far as to turn a flight around and return to the gate because two passengers refused to wear masks.

The tougher policies come as U.S. airlines struggle with passenger demand that has dropped to less than 30% of the demand before the pandemic struck. Delta recently reported that the carrier is losing $27 million a day. At American, 41,000 employees recently agreed to take early retirement.

Question: Which airlines require that I wear a mask during my flight?

Q: What happens if I refuse to keep my mask on during the flight?

A: Alaska, American, Delta, Spirit and United say passengers who remove their masks or refuse to wear one in the first place would be banned from future flights. American Airlines said its ban would last as long as it requires masks on flights. Alaska and United said the duration of their bans would be determined by an investigation into the incident. Delta representatives declined to say how long their airline’s ban would last. Spirit did not respond to emails asking about the duration of its ban.

Other carriers, such as Hawaiian, JetBlue and Southwest, have not posted on their website the consequences of flouting the face-covering policy.

On all airlines, flight attendants have been instructed to remind passengers of the policy but not to escalate the matter in a way that results in a confrontation during a flight.

Q: What if I have a medical reason for not wearing a mask?

“Our policy is meant to offer the strongest level of protection for everyone given all that we currently know about how COVID-19 is transmitted,” JetBlue spokesman Philip Stewart said.

Delta requires passengers who claim to have a medical reason for not wearing a mask to go through a consultation process that can take up to an hour. The process involves a phone call with a medical consultation service backed by the University of Pittsburgh Medical Center. Anyone who falsely claims a disability or a medical condition to keep from wearing a mask may be barred from Delta flights during the entire period that masks are required by the airline.

A: Most of the major airlines will provide passengers with a mask if needed.

Q: Can I wear a mask with a valve?

A: United, Delta and JetBlue have banned passengers from wearing masks that include a breathing valve, which filters air coming in but allows air to escape when the wearer exhales. The U.S. Centers for Disease Control and Prevention said such masks may protect the wearer but do not prevent the spread of the coronavirus to others.

Q: Which airlines are leaving middle seats empty to lower the risk of virus transmission on the flight?

A: Delta, JetBlue and Southwest have all committed to keeping the middle seat vacant at least for the near future unless a family requests to sit together. Alaska representatives said their carrier will reassign seating during the boarding process to create space between passengers whenever possible.

American and United adopted policies of keeping the middle seats vacant last spring but rescinded that policy over the last couple of months as demand for air travel has gradually increased.

In May, low-cost Frontier Airlines announced it would charge passengers a fee, starting at $39, to ensure the middle seat next to them would remain empty. But several lawmakers criticized the carrier before the fee took effect, and Frontier backpedaled.