Business AUTO REVIEW: Despite Its Name, 2021 Kia K5 Is One Superb Sedan
Business 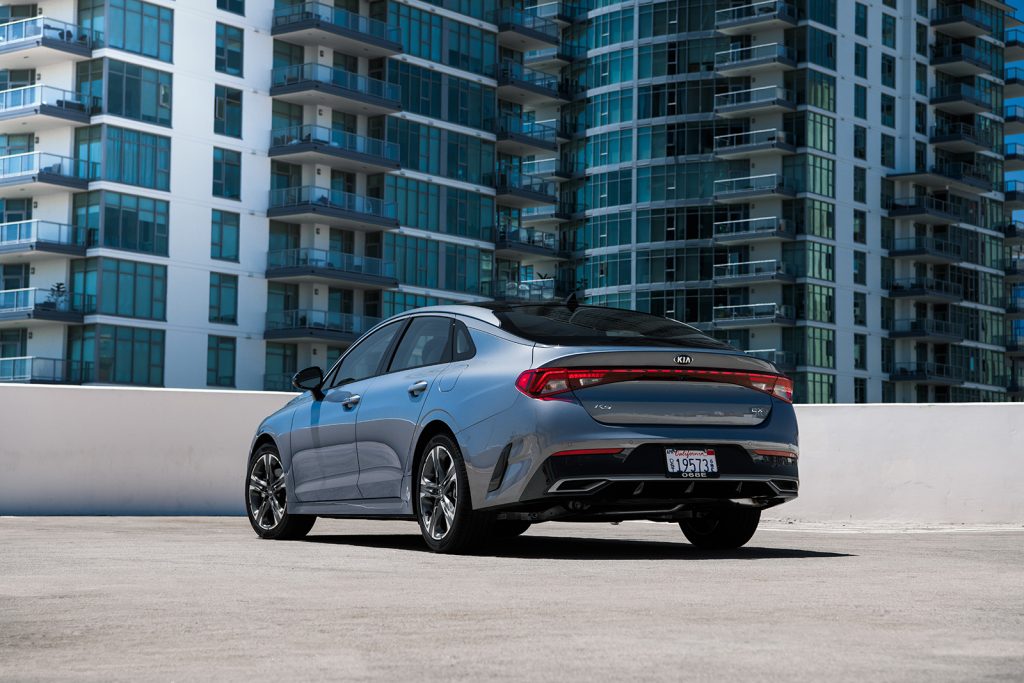 Having spent nearly two decades and untold millions of dollars building up the Optima name for its midsize sedan in the American market, Kia’s 2021 midsize sedan will be known as the K5, a moniker used in its Korean home market, one with all of the appeal of a prison cell block. You can just hear it, “Yup, me and the boys are doing time on K5.”

But its charmless name belies its appeal, for the 2021 Kia K5 is one fine four-door.

Offered in LX, LXS, GT-Line, EX and GT trim, the 2021 K5 shares its new platform with its corporate cousin, the recently redesigned Hyundai Sonata. It wears a distinctive evolution of the Optima’s eye-catching design in which the roof visually merges with the rear window and is framed by the Optima’s trademark chrome strip that arches rearward over the side windows and now swoops under the rear window. This emphasizes its fastback shape without looking hunchback, a tricky design feat to pull off. Up front, the tiger nose grille has a far more aggressive texture, and is thinner yet wider, wrapping under the headlamps and snaking around the corners. The overall appearance seems leaner, longer, lower and wider.

Climb inside and you’ll be greeted by a stunning interior, despite many of the trim panels comprised of hard plastic. The sporty GT-Line, which gives you the look of the top-of-the-line GT but little else, sports red leatherette seats trimmed with black cloth. The shiny piano black plastic accents lend the interior a richer feel, like a Steinway might lend a room the air of superiority. In contrast, the EX is decked out with a matte wood trim finished in a gray/beige tone that’s very fashionable at the moment.

Atop the instrument panel, the standard infotainment system uses older Kia software on its 8-inch touchscreen and has two knobs, one for volume and one for tuning. And you can use Apple CarPlay and Android Auto wirelessly. This is a fantastically convenient system. In contrast, the larger 10.25-inch screen uses newer, flashier software that does the same thing with cooler graphics. And it has a knob for volume, but not tuning, which is done on-screen. But here’s what’s truly odd. To use Apple CarPlay and Android Auto, you have to plug it in, which makes absolutely no sense. There’s a vertical slot for Qi wireless charging in addition to four USB ports — two in front, two in back.

Tucked below it is the automatic control, which allows you to set the automatic climate control fan speed to low, medium or high, so that you won’t always get blasted by air when you start the car.

Good design is always worth a premium — it’s just that Kia doesn’t charge extra for it, although they could.

Legroom is plentiful in both the front and rear seats. Seat height is impressive, as you won’t find yourself sitting on the floor. Taller passengers may find headroom a bit dear, however. And the car’s beltline is very high, so it feels as if you’re somewhat submerged in the car, like a two-year-old in an oversized highchair. Chalk it off to styling. Remember, you must suffer to be fashionable. The trunk is sufficiently large and nicely trimmed, although it lacks any hooks for a cargo net or grocery bags, and the gooseneck hinges intrude on cargo space.

The K5 comes with front-wheel drive, but all-wheel drive is offered on LXS or GT-Line models. All K5s except the GT come with a 180-horsepower 1.6-liter turbocharged four-cylinder engine and an eight-speed automatic transmission. The GT, available in November, comes with a 2.5-liter turbocharged four with an eight-speed dual clutch automatic. It’s a wet clutch system, which speeds transmission cooling and ensures durability.

Power is humdrum off the line until the turbocharger kicks in. That’s when things get much stronger. It’s very responsive once up to speed, particularly on the highway. It’s as much power as most drivers will need. The automatic transmission can be shifted manually using the shift lever, which is designed with a thick handle that feels great. There are no paddle shifters. Visibility, especially over-the-shoulder, is excellent. Braking power is strong, but pedal feel is somewhat light and could be more progressive in feel.

Handling is a strongpoint. The K5 soaks up bumps without any excess body motions, although it lacks the harsh snubbed down feel typical of many European cars. Instead, there’s enough compliance to keep you comfy. This means there is quite a bit of body lean in corners, but grip is exceptionally strong.

The optional adaptive cruise control with centering allows you to drive for short periods of time without your hands on the wheel. It’s activated by a button on the steering wheel, although you might confuse its steering wheel icon for a heated steering wheel button, which is on the center console.

The cabin is impressively quiet.

While many bemoan the death of sedans, the 2021 Kia K5 proves there’s much to like about them, and their driving feel if far superior to that of many crossovers. Best of all, they’re priced far lower as well.

Let’s face it, with a starting price less than $24,000, the K5 makes for a compelling choice, no matter what you call it.