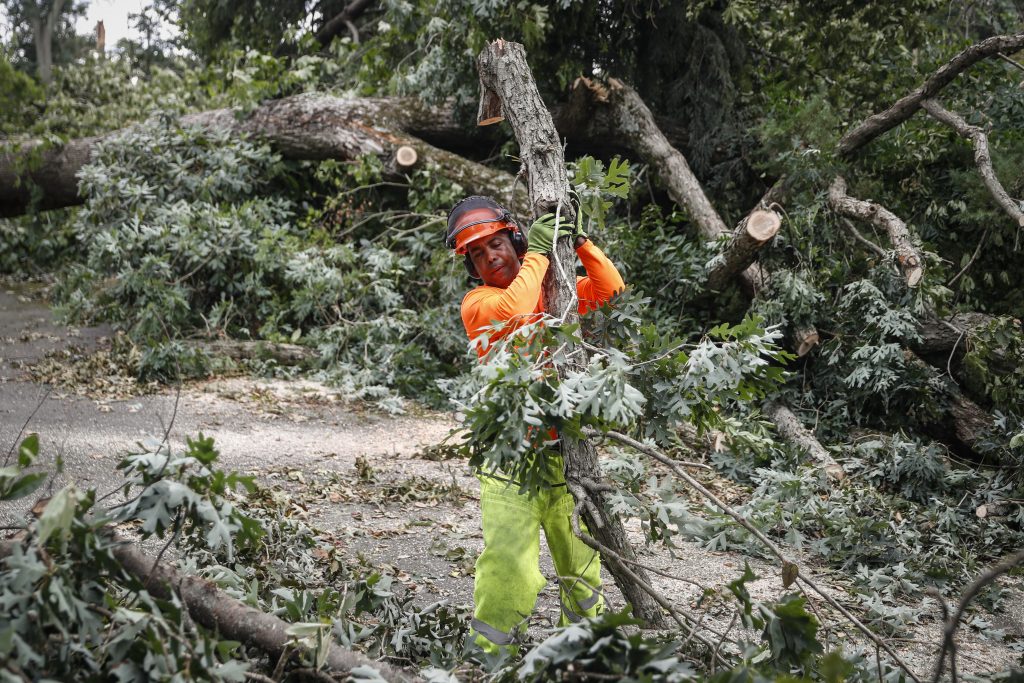 More than 520,000 homes and businesses in the New York tri-state area were still without electricity Saturday as utilities worked to get the lights on four days after Tropical Storm Isaias.

Tuesday’s storm dealt the region a surprisingly sharp blow, killing at least one person, downing trees, halting commuter trains and initially knocking out power to more than 2.5 million customers. A customer can be a single home or a skyscraper, sometimes even an entire apartment complex.

“We understand the frustration,” Con Edison President Tim Cawley said at a virtual news briefing Saturday afternoon as 71,000 of the utility’s customers in New York City and its northern suburbs remained out of power, down from 300,000 Tuesday.

“We are doing everything we can to restore power as quickly as we can,” he said. Con Edison said about 2,900 workers were grappling with the aftermath of the storm, with another 320 workers due to arrive Sunday. New York City Emergency Management Commissioner Deanne Criswell said at a separate news conference that the city was moving as quickly as possible to clear downed trees.

Still, some of the region’s elected officials have blasted the utilities’ preparedness and response, with New York and Connecticut launching investigations.

The outages themselves were posing dangers: Four people were hospitalized late Friday with carbon monoxide poisoning from a home in Mastic, on Long Island, where a generator was running in the basement, Suffolk County police said.

Tens of thousands of customers got their electricity restored Saturday, but more than 269,000 were still in the dark by late afternoon in Connecticut, more than 170,000 in New York City and its suburbs, and more than 80,000 in New Jersey, according to various utilities.

The Democrat said restoration priorities include removing trees that are blocking roads and making sure generator power doesn’t fail at water treatment facilities and nursing homes.

David Chass, a volunteer firefighter, told the Greenwich Time he understands that utilities need to set priorities. But after five days without electricity or running water — his Greenwich home relies on a well — Chass questioned why he didn’t at least have estimate of when his power would be turned on.

“It’s nearly impossible to take care of my father, let alone my family, without any information as to when we might have our power restored,” he told the newspaper.

Eversource, the company that powers his home, said it expected to have town-by-town restoration estimates later Saturday.

Power companies called Isaias one of the biggest outage producers in recent years.

PSE&G Chief Operating Officer Kim Hanemann said the company had made great progress restoring power in New Jersey, but officials “understand that is of little comfort to those still without air conditioning, lights and charged cellphones.” The company said it had gotten electricity back to about 96% of its New Jersey customers who lost it during Isaias, with about 24,000 to go, plus some others who lost power because of subsequent storms or other reasons. PSE&G said it had 3,400 people working on the effort.

Meanwhile, the Connecticut Department of Emergency Services and Public Protection said Friday it was “reviewing” Bridgeport Mayor Joe Ganim’s use of an emergency alert system to excoriate a power company, according to the Connecticut Post.

In text and phone messages sent through the system Thursday night, the Democratic mayor accused local utility United Illuminating of “irresponsibility and arrogance,” said it has “ignored us,” mentioned that he’d told city lawyers to explore possible legal action, and urged residents to call the company and press it to restore power. The messages also provided information on how to seek help from the city.

The state emergency notification system, called CT ALERT, is intended to tell residents about “imminent threats to health and safety” and “life threatening emergencies,” according to its website.

Scott Appleby, Bridgeport emergency management chief, told the Post he was “more than comfortable” with using the alert system for what he described as telling residents where to call for help.

UI spokesperson Edward Crowder said it wasn’t the utility’s place to opine on whether the messages were appropriate, but its crews were “working hard, day and night, to safely restore service.”