Israel Tel Aviv Lighting Up With Lebanese Flag Sets Off Controversy, in Israel and in Lebanon
Israel 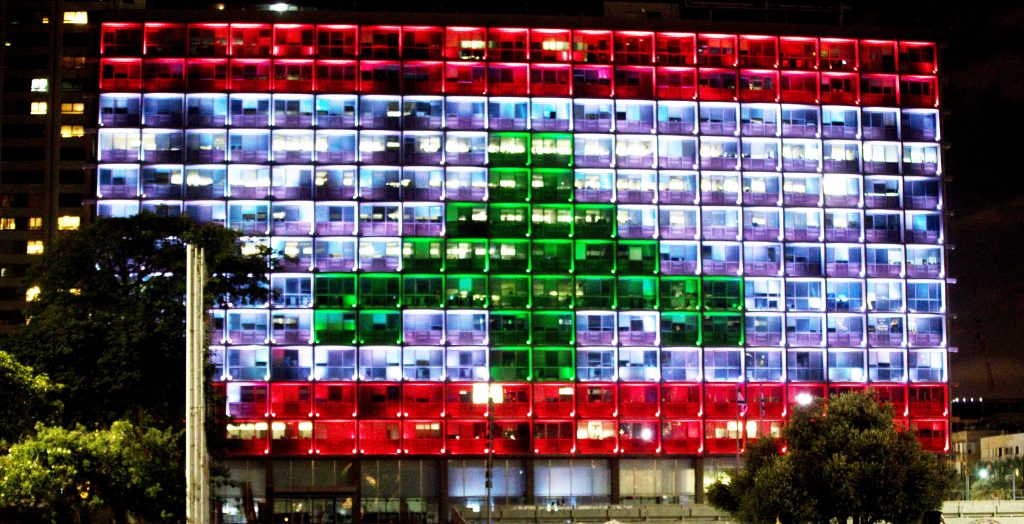 The red, white and cedar green of the Lebanese flag were lit up over a Tel Aviv square on Wednesday in a show of solidarity with Beirut as it reels from a devastating explosion.

Israel has been in a technical state of war with Lebanon for generations, and it deems the country’s armed Shiite Muslim group Hezbollah, backed by Iran, the biggest threat across its northern border. Israel and Hezbollah fought a month-long war in 2006 and have traded fire again in recent weeks.

But, arguing that “humanity comes before any conflict,” Tel Aviv Mayor Ron Huldai ordered City Hall on Rabin Square to be illuminated with the Lebanese flag on Wednesday evening.

“Our hearts are with the Lebanese people following this terrible tragedy,” Huldai wrote on Twitter.

The decision drew sharp criticism from some Israelis, including Yerushalayim Minister Rabbi Rafi Peretz, who likened it to “raising [an] enemy state’s flag in the heart of Tel Aviv.”

He said that “Lebanon has allowed Hezbollah to intensify and enables Iranian terrorist activities in its territory.”

Meanwhile, amid the public debate in Israel, many Lebanese took to social media on Wednesday to express their ire over the attempted gesture of solidarity by the Tel Aviv municipality.

“We do not want you to light up the Lebanese flag,” wrote user Abbass ALI in Arabic, adding in Hebrew that “we will light up Tel Aviv with our missiles.”

“Illuminating buildings with the Lebanese flag? Are you offering to provide Lebanon with humanitarian aid?” another user wondered, seemingly not knowing that Israel did offer aid to his country. “And let’s not forget the Israeli aggression in ’78, the invasion in ’82, the Sabra and Shatilla massacre, the Kfar Kanna massacre and finally the July 2006 war, when the Zionists wrote on missiles ‘from the children of Israel to the children of Lebanon.’”

Another user wrote, “What? They killed a hundred times more Lebanese than those who died in this explosion.”

Political analyst Amit Segal noted ironically that “peace will come when the city square in Beirut is lit up with an Israeli flag.”

Prime Minister Binyamin Netanyahu said Israel had offered aid to Lebanon after the massive warehouse explosion, to which Lebanon has not yet responded.