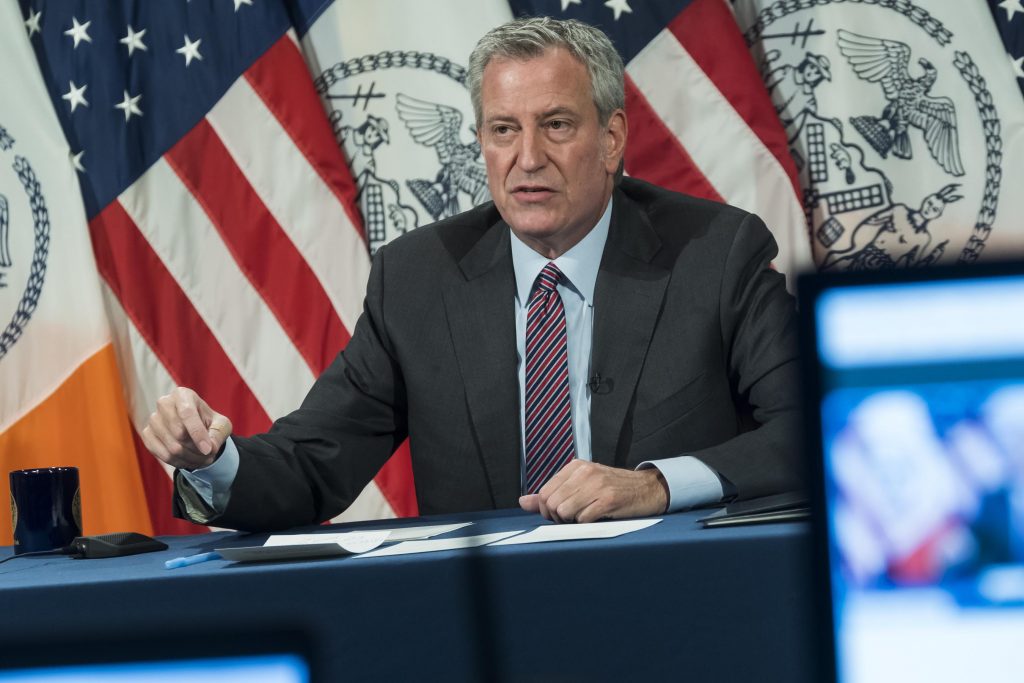 Travelers coming to New York City from 35 states and territories on New York state’s COVID-19 quarantine list may be met at bridges and train stations and told to fill out travel forms under a program announced by Mayor Bill de Blasio. Also on Wednesday, New York’s teachers’ unions said a single COVID-19 case in a school should trigger its immediate closure for 14 days as they listed demands for reopening this fall.

New York City Mayor Bill de Blasio said Wednesday that the city will set up checkpoints at Penn Station and other entry points to the city to tell travelers from 35 states and territories with high COVID-19 infection rates that they must quarantine for 14 days.

The travelers will be given a health form to complete so that contact tracers can follow up and make sure they are quarantining, he said.

The checkpoints will be set up at different entry points each day starting with Penn Station on Thursday, de Blasio said. Sheriff Joseph Fucito said there will be “a random element” and every sixth or eighth car on a bridge might be checked.

Travelers who refuse to fill out the travel form could be fined up to $2,000, de Blasio said. “If you come here you must quarantine,” de Blasio said. “It is not optional. We do not want to fine you, we do not want to penalize you. In fact, we want to help you quarantine. But if you don’t respect our laws we will penalize you, because this is about respecting the health and safety of New Yorkers.”

Thirty-four states plus Puerto Rico are on New York state’s quarantine list because of high rates of coronavirus infection. The random check system de Blasio described is similar to what is already in place at airports.

Some privacy advocates criticized the plan. “This is a ludicrous, invasive, and deeply dangerous plan,” Albert Fox Cahn, the executive director of the Surveillance Technology Oversight Project, said in a statement. “Rather than addressing the city’s backlog in testing capacity and struggling contact tracing program, the mayor is transforming this pandemic into a policing issue.”

New York’s teachers’ unions said a single COVID-19 case in a school should trigger its immediate closure for 14 days as they listed demands Wednesday for reopening this fall.

New York State United Teachers and the United Federation of Teachers called for the state policy just as New York is poised to announce initial decisions on reopening plans submitted by roughly 700 school districts. The unions said in a release that districts moving ahead with re-openings “must err on the side of caution at all times.”

Districts submitted reopening proposals last week amid worries that resumption of in-person classes could put students, teachers and their families at risk. Gov. Andrew Cuomo said this weekend that there needs to be a “full conversation” that answers parents’ questions about reopening safely.

The unions said that when there is a positive COVID-19 test of a student or staff member, there should be an immediate closure of that school building and a return to remote learning for at least 14 days. They also want clear statewide directives how contact tracing and quarantining will be conducted.

“This is no time to take risks,” NYSUT President Andy Pallotta said in a prepared release. “If the state allows school buildings to reopen, districts must be prepared to close them in the event of a positive case.”