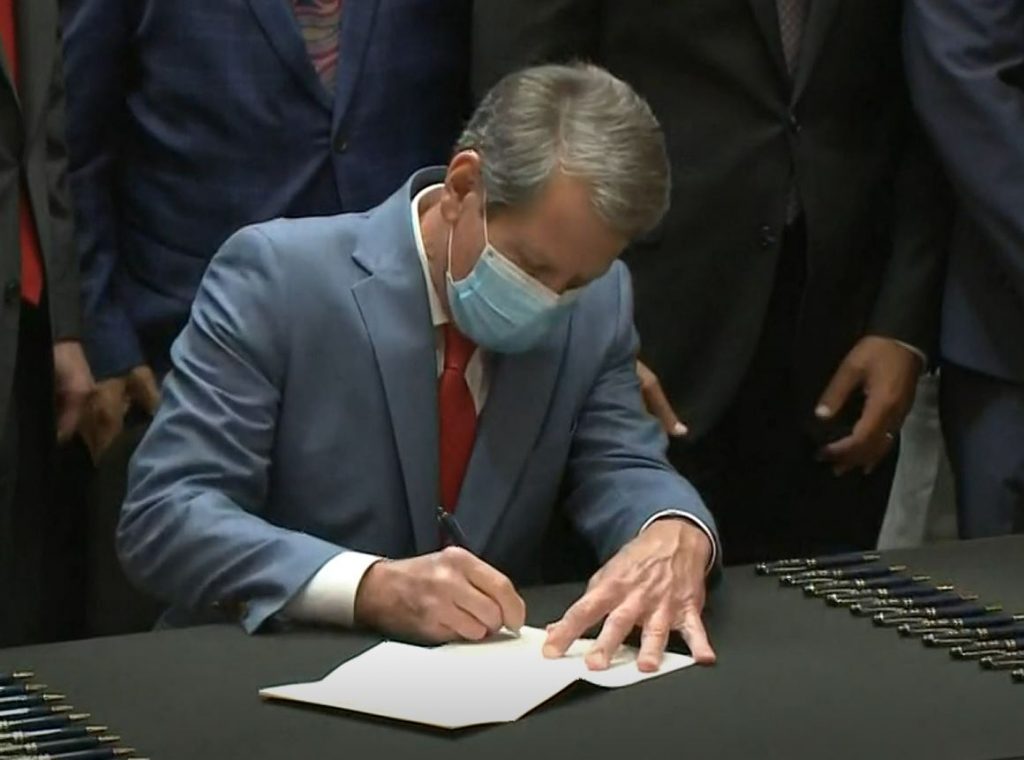 Georgia Gov. Brian Kemp on Wednesday signed into law a new measure providing additional legal protections to police officers, a step that critics say is flawed and out of step with nationwide efforts to make officers more accountable for their actions.

House Bill 838 creates a new crime: bias-motivated intimidation, which would apply to the death or serious bodily injury of a police officer, firefighter or emergency medical technician. The crime would also apply any time someone causes more than $500 in damage to property owned by police, firefighters or emergency medical technicians because of “actual or perceived employment as a first responder.”

Faced with pressure from business groups and the possibility of national embarrassment after the February death of Ahmaud Arbery — which federal authorities are investigating as a possible white-on-black hate crime — legislative leaders agreed to strip first-responder protection from the hate crimes bill. But Republicans then separately rammed through the police protections bill with almost no Democratic support.

Although giving police more protections goes against a national climate of demands for more police accountability after George Floyd’s death in Minneapolis, it was no surprise that Kemp signed the measure. He has repeatedly called for Georgia to “back the blue” and called out the National Guard to protect state office buildings after a girl was shot by armed men on July 4 during a protest at the site of a fast food restaurant where Atlanta police had shot a black man named Rayshard Brooks the month before. Kemp contended that the city of Atlanta couldn’t provide adequate protection.

“House Bill 838 is a step forward as we work to protect those who are risking their lives to protect us,” Kemp said in a statement Wednesday after he signed the measure. “While some vilify, target, and attack our men and women in uniform for personal or political gain, this legislation is a clear reminder that Georgia is a state that unapologetically backs the blue.”

The crime is punishable by one to five years in prison and a fine of up to $5,000. The measure says the sentence must be stacked atop any other criminal conviction and can’t be served at the same time and that each violation must be a separate crime. That could lead to long sentences for violations such as vandalism aimed at officers.

The measure also allows police officers to file lawsuits against any person, company or group for infringing on the officer’s civil rights “arising out of the officer’s performance of official duties” or filing a knowingly false complaint against an officer.

Opponents said the measure was unneeded, in part because Georgia lawmakers several years ago added stiffer penalties for assault against a police officer.

“The Georgia code already includes more than sufficient protections for police officers,” said Andrea Young, executive director of the American Civil Liberties Union of Georgia. “HB 838 was hastily drafted as a direct swipe at Georgians participating in the Black Lives Matter protests who were asserting their constitutional rights.”

In attempting to persuade the governor to veto the measure, the ACLU argued that the way the bill is written, it could have the unintentional effect of reducing the penalty for killing a police officer from mandatory life in prison to the maximum of five years now specified in the law. Supporters say that won’t happen.