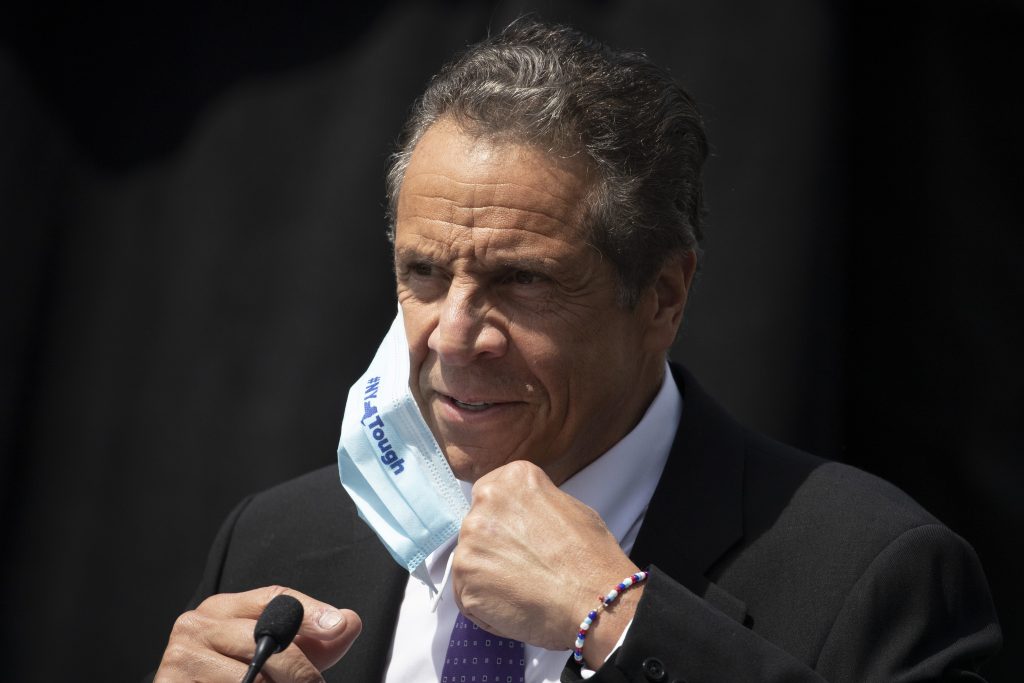 The governor who in large measure has defined states’ up-and-down fight against the coronavirus, including occasional combat with the White House, is poised to widen his national spotlight.

New York Gov. Andrew Cuomo is expected to take the reins of the National Governors Association on Wednesday during a meeting held virtually because of the disease.

The association represents governors in all 50 states and territories and has emerged from the political shadows since the pandemic erupted in the U.S. The chairman who is handing off to Cuomo, Republican Gov. Larry Hogan of Maryland, has pushed the group to put bipartisan pressure on the Trump administration to provide personal protective gear, ventilators, testing kits and budget help to the states.

In a recent interview, Hogan noted times when President Donald Trump would “bristle because he wants people to thank him for the job he’s done and to say everything’s great.”

“But my job as chairman of the governors was to stand up for the governors and kind of speak out,” Hogan said. “I’ve praised them when they made progress, but I’ve also been, as nicely as I could, you know, pushed them when I thought they needed to get something else done.”

Cuomo is less worried about making style points with the president and doesn’t shy from using the sharp-elbow approach. While he has worked with Trump to secure more ventilators and has even praised the president at times, he also has increased his critiques of the administration in recent weeks.

He has criticized it for failing to mandate masks nationwide, waiting until mid-March to ban travel from Europe and not providing additional aid to state and local governments beyond an initial infusion of cash in early spring.

“Every American knows this was the worst government blunder in modern history,” Cuomo said earlier this week. “Not since the Vietnam War have Americans sat in their living room to see the numbers … every night saying what a mistake it was.”

He also has chastised governors in states where the virus is surging for failing to learn lessons about the coronavirus that New York grappled with this spring, when the dead piled up by the thousands in New York City. Cuomo himself has been criticized for New York’s high COVID-19 death toll at nursing homes.

He will have to moderate his approach as he takes over an organization representing governors across the political spectrum — currently 26 Republicans and 24 Democrats.

Cuomo’s elevated profile could help the governors association become more influential as it lobbies for more federal aid, which remains a contentious bargaining point as congressional Democrats and Republicans struggle to compromise on another big coronavirus relief package.

“Here’s one of the biggest national crises going on in the country and these governors are in the spotlight, empowered on this issue,” said political consultant Harry Giannoulis, a former senior aide to Cuomo’s late father and former governor, Mario Cuomo. “And here’s Andrew Cuomo, who’s widely seen as having handled this issue.”

The incoming vice chairman, Republican Gov. Asa Hutchinson of Arkansas, said he is not concerned about Cuomo using the association as a platform to take digs at the Trump administration. He said the association is most effective when it advocates on behalf of problems facing all states, such as being able to increase virus testing and shore up their budgets against the steep economic drop caused by the pandemic.

Cuomo already has brought some governors together to collaborate on issues such as travel restrictions and sent his staff to help other states with testing, tracing and protective gear. The third-term governor could use his new national platform to seek more uniformity among the states in how they are responding to the virus surge, perhaps influencing national policy.

“The common interest of these governors is not a partisan agenda,” said University of Illinois at Chicago political science professor Chris Mooney. “Cuomo as a smart person is not going to raise those issues because he knows they’ll fracture the coalition.”