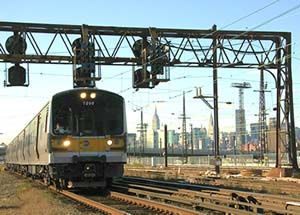 The fierce winds which have downed numerous trees throughout the metropolitan area have caused several outages of MTA trains and Port Authority Bridges.

MTA Chairman Foye and CEO Patrick J, in an interview on WCBS, said that wind gusts on the Cross Bay Bridge have registered up to 75 m.p.h., and 71 m.p.h. on the Verrazzano Bridge. The bridges and tunnels have reopened, except with respect to the Brooklyn-bound upper level on the Verrazzano which remained closed. Empty trucks and tandem trucks are banned until midnight, but passenger car vehicles can travel all our bridges and tunnels.

Some outdoor elevated subway service had been suspended or running behind schedule. Chairman Foye reported that the D, F and 3 lines are back in service, but the M train is running with delays.

Although there was hardly any flooding with this storm, nevertheless the high winds and substantial amount of fallen trees have caused all lines on Metro-North to be suspended at this time. A full-service suspension across the entire Long Island Rail Road system has been in effect since about 2:30 on Tuesday, with many trees down on the Babylon branch, the West Hempstead and Oyster Bay branches.