A New York City man was killed Tuesday when a tree fell and crushed his van, and another is in critical condition after being hit by a fallen tree branch, as Tropical Storm Isaias socked the region with heavy winds and rain, and knocked out power to more than 400,000 people in the city and surrounding areas.

A man in his 60s was sitting in his van in the Briarwood section of Queens when a massive Pine Oak came down on top of it around 1 p.m., killing him, police said.

Another person, in Brooklyn, is in critical condition after a tree branch blew off and hit him. 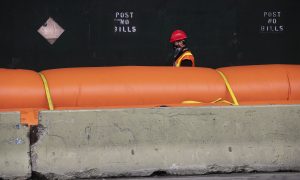 The mayor said there are around 2,000 tree limbs “down or damaged seriously.”

Meteorologists clocked wind gusts as strong as to 71 mph in the city and over 50 mph in the suburbs.

Service was suspended on the Staten Island Ferry and temporary barriers were set up to protect Wall Street and the famed South Street Seaport from potential flooding from the storm, which was centered about 60 miles west of the city near the Pennsylvania-New Jersey border at 2 p.m.

Outdoor subway service was stopped because of high winds and debris on tracks. All three commuter train services into and out of Manhattan — New Jersey Transit, Metro-North and the Long Island Rail Road — suspended operations.

As of 4:27 p.m., service was suspended or partially suspended on several subway lines. Up-to-date transit information is available at mta.info.

Strong winds caused a partial building collapse in Williamsburg. NYPD and FDNY told Hamodia that the second and third floors of the vacant building, located at 204 Beford Ave., between N 5th St. and N 6th St., collapsed at 12:45 p.m., with debris causing a minor hand injury to a pedestrian below.

To compound the troubles Tuesday, some New Yorkers who tried calling the government found that no one was available to take their calls.

Councilman Justin Brannan tweeted shortly after 1:20 p.m. that several constituents told him they had tried calling 911 to “report a downed tree that took out overhead power lines, causing sparks,” but no one answered their 911 calls. Brannan himself said he witnessed one woman calling 911 but no operator picked up. A Hamodia editor attempted to call 311 several times around 1:45 p.m. to report a fallen tree near his home, only to hear recordings that all circuits were busy. Councilman Joe Borelli, chair of the Council’s Committee on Fire and Emergency Management, tweeted, “The council’s committees on emergency management and technology will be calling for a joint hearing on today’s issues surrounding 911 & 311 call volumes.”

By mid-afternoon, the rain had stopped and skies were clearing, but there were still high winds.

Winds were not as strong to the north in the Hudson Valley on Tuesday afternoon, but gusts coupled with heavy rain brought down tree limbs and utility wires.