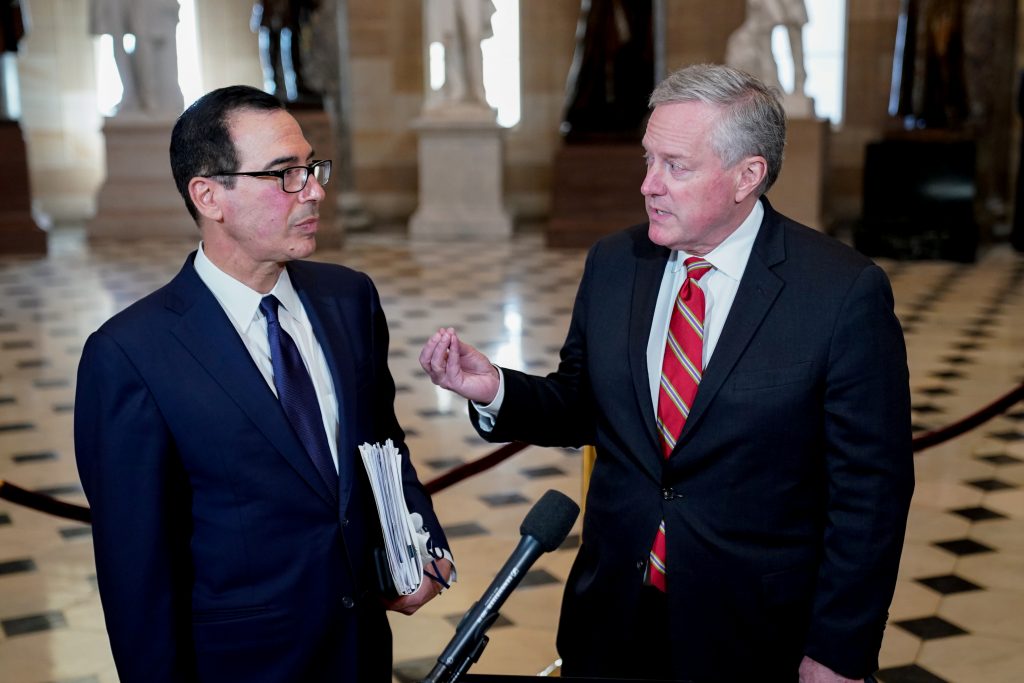 White House Chief of Staff Mark Meadows said on Sunday he was not optimistic on reaching agreement soon on a deal for the next round of legislation to provide relief to Americans hit hard by the coronavirus pandemic.

“I’m not optimistic that there will be a solution in the very near term,” Meadows said on CBS’ “Face the Nation” as staff members from both sides were meeting to try to iron out differences over the bill.

Democrats were standing in the way of a separate agreement to extend some federal unemployment benefits in the short-term while negotiations continue on an overall relief package, he said.

“We continue to see really a stonewalling of any piecemeal type of legislation that happens on Capitol Hill,” Meadows said. “Hopefully that will change in the coming days.”

Lawmakers and the White House have been unable to reach an accord for a next round of economic relief from a pandemic that has killed more than 150,000 Americans and triggered the sharpest economic collapse since the Great Depression.

Both sides said on Saturday they had their most positive talks yet. But there was no sign of movement on the biggest sticking point — $600 per week in extra federal unemployment benefits for Americans that have been a lifeline for millions of jobless Americans and expired on Friday.

Asked about efforts to renew the expired emergency federal jobless benefits, Pelosi said, referring to President Trump: “He’s the one standing in the way of that.”

Pelosi, who also highlighted the need for assistance for state and local governments, stood firm in her demand that Congress renew the $600 per week jobless aid. She told ABC’s “This Week” that when unemployment drops, the federal support could fall too.

“As that goes down, then you can consider something less than the $600, but in this agreement, it’s $600,” she said. “It’s essential for America’s working families.”

Treasury Secretary Steve Mnuchin told ABC Trump supports the enhanced benefits but does not want people to make more when they are unemployed than they would if they had a job.

“I think on the concept, we absolutely agree on enhanced unemployment. We want to fix the issue where in some cases people are overpaid and we want to make sure there’s the right incentives,” Mnuchin said.

There is a need to support workers and the economy, he said, but “we have to be careful about not piling on [an] enormous amount of debts for future generation.”

The House of Representatives, controlled by Democrats, proposed their version of relief legislation in May. The Republican-led U.S. Senate did not make a counter-proposal until last week and even Republicans do not agree among themselves on what should be in the bill.

Mnuchin told reporters on Saturday the talks were constructive but had reached an “impasse” over whether to come to a short-term agreement to extend the federal jobless benefit or a more comprehensive deal.

The officials will meet again on Monday, after their staff meet on Sunday.