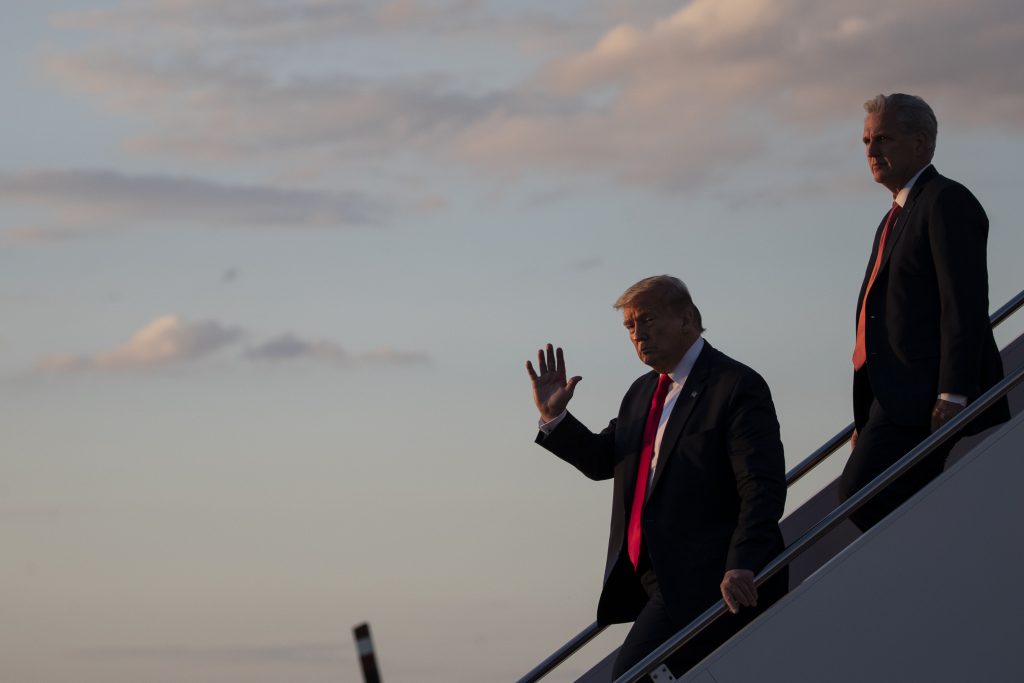 In a suburban Houston congressional district that backed President Donald Trump in 2016, a twice-elected Republican sheriff is battling a Democrat who’s the son of an immigrant from India. To Democrats, that smells like an opportunity.

Things are flipped in central New York, where freshman Democratic Rep. Anthony Brindisi faces the Republican he ousted two years ago from a district near Syracuse that includes smaller cities like Binghamton and Utica. President Trump won there easily, and Republicans say his place atop the ticket will help propel Claudia Tenney back to Congress.

The tale of two districts 1,600 miles apart spotlights that many pivotal House races hinge on suburban voters. While some like Brindisi’s have a more rural, blue-collar feel than the diverse, better-educated one outside Houston, an overriding factor will be how the President is viewed in the district.

And that’s a problem for the GOP.

Two years after a 40-seat surge fueled by wins in the suburbs hoisted Democrats to House control, Republican hopes of recapturing the majority have buckled along with Trump’s approval ratings. Some worry that the party will lose seats, an agonizing letdown from their one-time dream of gaining 17 seats.

“My fear for Republicans is there are simply not enough rural voters to offset the losses they’ve suffered in the suburbs these last few years,” said former Rep. Charlie Dent, R-Pa., a Trump critic. “It’s certainly possible the Democrats could pick up more than a few seats.”

Democrats boast an ever-expanding target list that includes a half-dozen Republican seats in Texas plus others outside Atlanta, Cincinnati, Los Angeles and Phoenix. They hope to win in traditionally red strongholds like Alaska, Indiana, Missouri, Nebraska and rural Virginia, while toppling New Jersey Rep. Jeff Van Drew, who defected to the Republican Party last year.

But Democrats are fortifying their chances with a money-raising bonanza. Since January 2019, all 29 Democrats in House districts Trump carried in 2016 have banked more money than their GOP challengers, usually by multiples. The same is true for all but two of the 24 other Democrats in seats Republicans said they’d pursue aggressively this year.

Further bolstering Democrats is repulsion among some voters over President Trump’s inflammatory words, the coronavirus pandemic and crippled economy, and the fact that many suburbs are growing more diverse.

All that could prove telling in the Houston-area district where Democrat Sri Preston Kulkarni is battling GOP Sheriff Troy Nehls.

The suburban district has been trending away from Republicans as it becomes wealthier and more diverse, with Trump’s eight-point victory there well below 2012 GOP presidential candidate Mitt Romney’s 25-point win. The district has so many minorities that Kulkarni’s campaign literature is in 21 languages.

Houston has also seen a major virus resurgence. “It’s the greatest failure of leadership in American history,” Kulkarni said of the pandemic response.

The American-born Kulkarni left college temporarily when his father was dying of cancer to help provide care and to aid the family’s struggle with medical bills. He wields the story as a cautionary tale as Democrats make health care their top issue during a pandemic in which Republicans want the Supreme Court to overturn former President Barack Obama’s health care law.

A former foreign service officer, Kulkarni lost a 2018 bid for the seat to GOP Rep. Pete Olson, who chose to retire after that close call. Outspent last time, Kulkarni has raised five times what Nehls has collected.

Yet Nehls hasn’t hidden his support for Trump, attending when the president visited Texas recently. He’s expressed skepticism on the subject of protective masks, writing that a local mandatory mask order “looks more like a communist dictatorship than a free Republic.” In a digital ad early this year, the announcer boasted that as sheriff, Nehls “locked up over 2,500 criminal illegal immigrants.”

Brindisi’s upstate New York district was struggling economically before the virus hit, and many expect Trump’s populist and nationalist appeals to help the President carry it again. Brindisi defeated Tenney in 2018 by two percentage points, and Trump carried the district by 16 points two years earlier.

Tenney said she’s focusing on her accomplishments during her two years in Congress, including backing the GOP’s huge 2017 tax cuts. And she’s attacking Brindisi for falsely posing as a moderate, citing his support for President Trump’s impeachment.

“If you just drive around and look what’s going on, it’s Trump country,” said Tenney, adding that the President’s popularity should prove “a big help” to her.

Brindisi said the district doesn’t need a “controversial” representative. Among other things, Tenney once asserted that many shooters in mass slayings are Democrats.

Brindisi’s first TV ad highlights language he inserted into a larger bill requiring the military to buy stainless steel flatware domestically. The last U.S. producer of those items happens to be in his district.

“Regardless of who’s at the top of the ballot, I think that I can stand on my own two feet,” said Brindisi. What matters, he said, is having a representative who “shows up and gets the job done.”