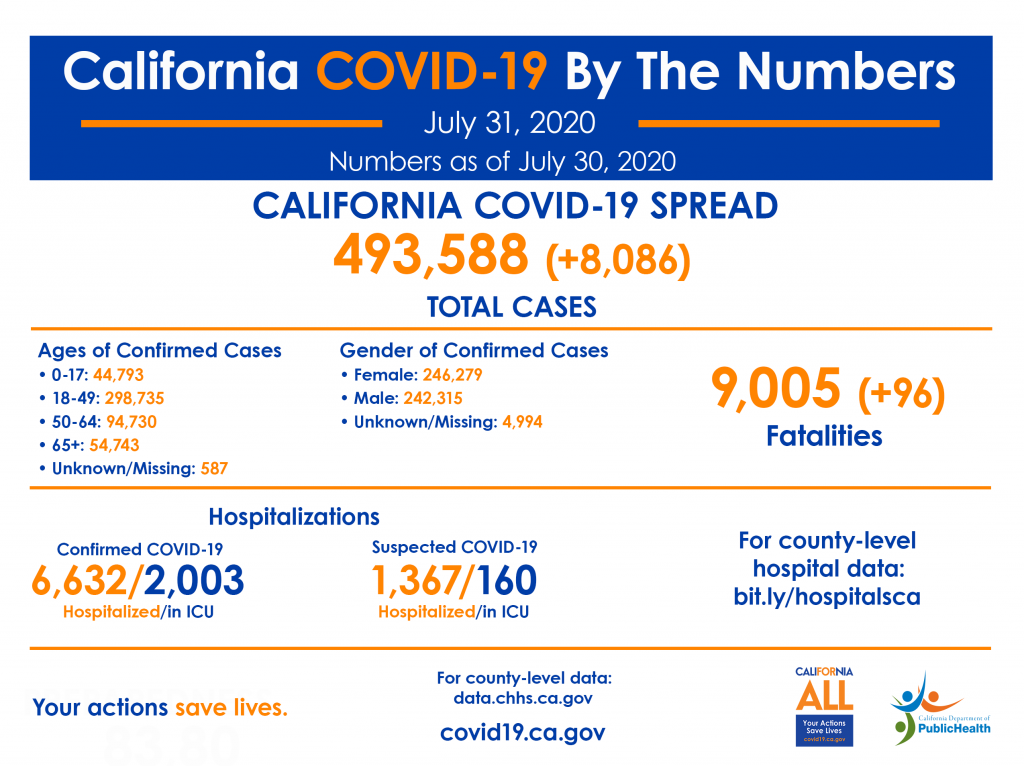 California recorded 214 coronavirus-related deaths on Friday, a record-setting daily total that capped a month of rising fatalities amid a surge of new COVID-19 cases.

It marked the fifth time in July that California broke its single-day record for deaths, and the third time this week. The previous record of 176 was just set on Wednesday.

In the past week, an average of 127 Californians have died every day. That’s a 22% increase from the previous week’s average daily death toll of 104.

Officials announced Friday that a teenager in the Central Valley had died of causes related to COVID-19, becoming the first juvenile death from the disease in California.

Officials said the teen had underlying health conditions but declined to provide specific information about the victim’s age or county of residence, citing privacy concerns.

“Our hearts go out to the family and loved ones of this young person whose death is a tragic and powerful reminder of how serious COVID-19 can be,” Dr. Sonia Angell, the state public health officer, said in a news release.

The teen died earlier this week at Valley Children’s Hospital in Madera, the hospital said in a statement.

“The death of this patient reaffirms that children … are not immune from the devastating impact of the COVID-19 pandemic,” the statement said.

No other COVID-19-related death of a person under 18 has been confirmed by the state since the pandemic began. In March, Los Angeles County public health officials announced that a 17-year-old was believed to have died of causes related to the virus but later determined he didn’t die of COVID-19.

Los Angeles County added at least 2,505 cases Friday and 65 deaths, bringing its total to 188,541 cases and 4,624 deaths. Officials noted that the number of fatalities marked an increase, with an average of 46 deaths a day in the past seven days, compared with last week’s daily average of 36.

“As we are seeing increases these past few days in the numbers of people dying from COVID-19, the reality of the devastation cannot be ignored,” Barbara Ferrer, LA County health director, said in a statement.

The county Department of Public Health said in a news release that deaths “are a lagging indicator” that reflect exposures from weeks earlier.

Orange County reported 418 new coronavirus cases and 14 deaths Friday. Five of the deaths were among people who lived in skilled nursing facilities, and four were among residents of assisted living facilities, officials said.