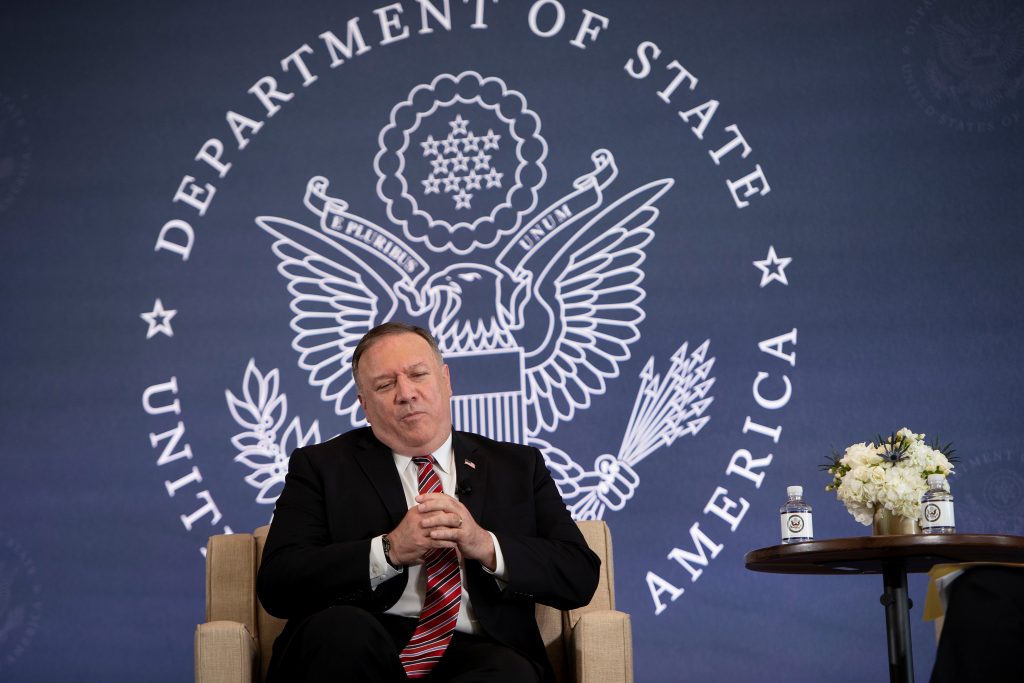 The United States is criticizing a number of eastern and central European nations, including Poland, for failing to compensate Holocaust victims and their families and communities for property seized during Nazi occupation in World War II as the numbers of survivors dwindles due to age.

In a report issued Wednesday, the State Department called out Bosnia, Belarus, Ukraine and particularly Poland for not having acted on restitution claims. Croatia, Latvia and Russia were also taken to task in the report, which is likely to draw angry responses from the governments identified.

“Much time has passed, and the need for action is urgent,” Secretary of State Mike Pompeo said in a forward to the 200-page report that looks at the records of 46 countries in meeting commitments they made to restitution in 2009.

The report had been due for release in March but was postponed because of the coronavirus pandemic and concerns it could fuel anti-Semitism during the economic turn-down caused by the outbreak.

“As we mark the 75th anniversary of the end of the Holocaust, the legacy of the Nazis’ mass looting remains in too many places and largely unaddressed,” he said. “Given the advanced age of Holocaust survivors, many of whom live in poverty, the findings of this report serve as a reminder that countries must act with a greater sense of urgency to provide restitution or compensation for the property wrongfully seized from victims of the Holocaust and other victims of Nazi persecution.”

The report cited “bureaucratic inertia” for much of the problem that has persisted for generations and in some cases been exacerbated by a rise in anti-Semitic sentiment throughout Europe.

The return of, or compensation for, real property such as homes, businesses and places of worship seized during the Nazi occupation, as well as during postwar communist rule, is a particular point of concern, especially restitution for so-called “heirless property” for which no surviving heirs are identifiable, the report said.

The report noted that Poland, which had the largest Jewish community in Europe before the outbreak of World War II, has not yet enacted comprehensive legislation on national property restitution or compensation covering Holocaust confiscations. Only about half of 5,500 claims for Jewish communal property have been adjudicated and half of those were rejected, it said.

The lack of a resolution to the issue in Poland became part of the country’s recent election campaign, with the right-wing president, Andrzej Duda, repeatedly depicting his liberal opponent, Rafal Trzaskowski, as someone who would sell out Polish interests and hand over huge sums to an “international lobby,” a veiled reference to Jewish groups seeking restitution.

Many European governments, including Poland’s, have brushed aside criticism of their records on the matter, citing difficulties in proving decades-old ownership and appropriate recipients for heirless property.

Russia was also singled out for nationalizing and failing to pay compensation for property, including art work, seized or nationalized by the former Soviet government. “Russia has done little to conduct provenance research or to restitute or compensate for art recovered at the end of WWII that had been confiscated by the Nazis from Jewish and non-Jewish victims,” the report said.

On looted artwork, the report said five nations — Austria, Britain, France, Germany and the Netherlands — had made progress by establishing dispute resolution panels to deal with claims.

The report was mandated by Congress in a law known as the Justice for Uncompensated Survivors Today, or JUST, Act, which was signed by President Donald Trump in 2018 with the support of many lawmakers and Jewish groups.

“As the JUST Act report makes clear, Holocaust survivors and Jewish communities continue to wait for justice for property that was wrongfully taken from them,” said Gideon Taylor, operations chairman of the World Jewish Restitution Organization. “Even in these hard times, countries should live up to their pledges to address the material wrongs of the Holocaust while the remaining survivors are still alive.”

“Restitution for those individuals whose property was seized during the Holocaust is long overdue,” said Sen. Marco Rubio, R-Fla. “We must continue to press our friends and allies in Europe and ensure survivors are provided the justice they deserve and are able to live out their days in dignity.”

Democratic Sen. Tammy Baldwin of Wisconsin concurred, saying: “By highlighting this issue as an American foreign policy priority and recognizing that there is still more work to do, we will spur further action in countries that are falling short of their obligations to bring about justice for Holocaust survivors, victims, and their families.”