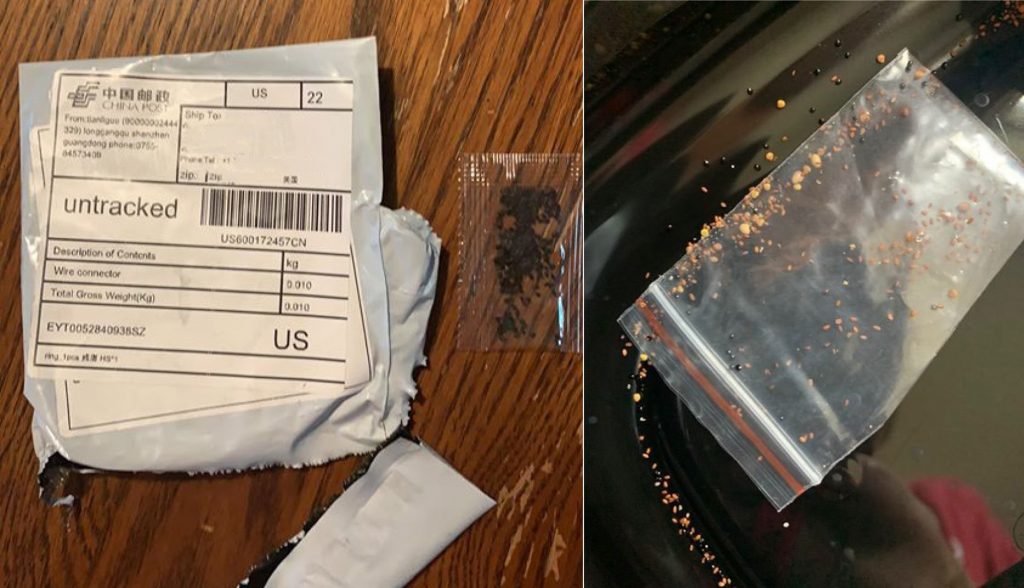 The Agriculture Department is looking into the origins of mysterious packages of seeds with Chinese mailing addresses delivered to recipients who say they never ordered them.

With tensions running high between the U.S. and Beijing on issues including defense and trade, some recipients of the seeds asked via social media postings last week if there could be a nefarious intent like spreading invasive plant species.

The Animal and Plant Health Inspection Services said Tuesday that it’s working with U.S. Customs and Border Protection, other federal agencies and a handful of state Agriculture departments that have received questions from recipients about packets arriving in the mail, sometimes marked as jewelry but containing unidentified seeds.

“At this time, we don’t have any evidence indicating this is something other than a ‘brushing scam,’ where people receive unsolicited items from a seller who then posts false customer reviews to boost sales,” the agency said. “USDA is currently collecting seed packages from recipients and will test their contents to determine if they contain anything that could be of concern to U.S. agriculture or the environment.”

The agency asked people to contact its offices or state plant regulatory officials if they receive unsolicited packets of seeds and to hold on to the packets and mailing materials so officials can review them.

Unidentified seeds may become the source of widespread damage. Invasive species can overrun farmland and compete with crops for water and nutrients. Some are accidentally introduced with seeds hitching a ride on other plants, and some are introduced intentionally. The infamous kudzu vine was introduced in Pennsylvania as a tool to reduce soil erosion and planted in the Southeast as an ornamental plant and cover crop. The vine outpaces native plants in growth and smothers other plants in its path.

The Washington state Agriculture Department identified the threat it sees in the seed packets in a statement issued Friday. Alabama, Georgia, Kansas, Maryland, Minnesota and Nevada agricultural agencies also reported that similar packets had been delivered to residents.

“Unsolicited seeds could be invasive, introduce diseases to local plants, or be harmful to livestock,” Washington State said.

The department urged people not to open the packets and not to plant the seeds.

Barbara Glenn, CEO of the National Association of State Departments of Agriculture, laid out her organization’s concerns in a statement Monday.

“NASDA is working closely with USDA’s Animal & Plant Health Inspection Service (APHIS) and the Department of Homeland Security to understand the origin of these unsolicited seeds from China that have entered our country illegally,” Glenn said in the statement.

The Kansas Department of Agriculture posted photos of the seed packages.