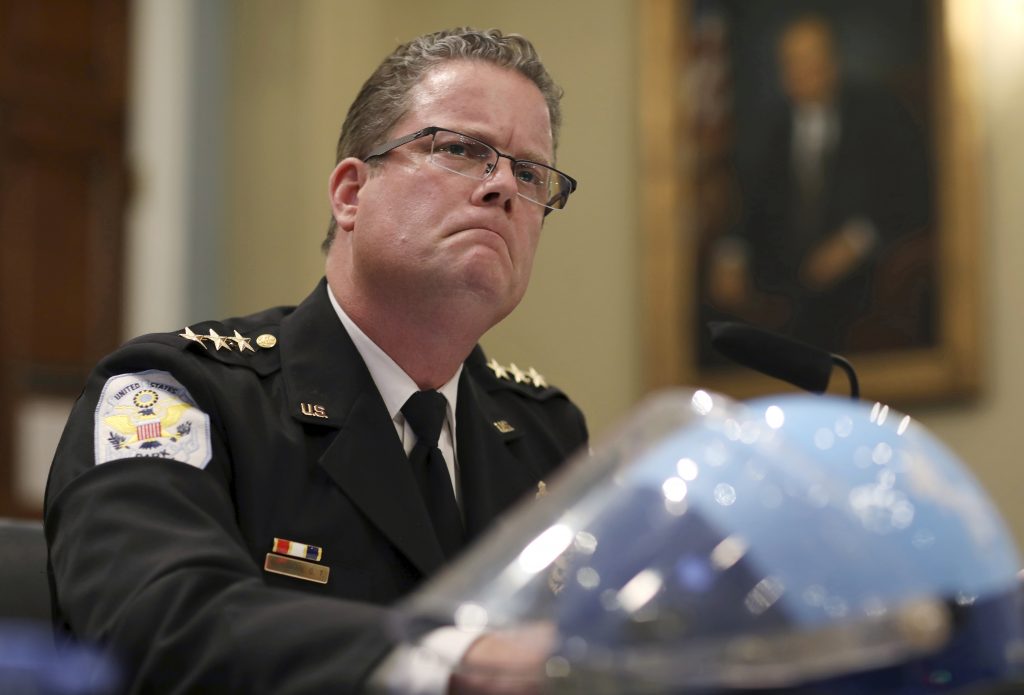 In his first public accounting of a flashpoint in nationwide street protests, the head of the U.S. Park Police denied Tuesday that his officers turned their clubs and chemical agents on protesters in front of the White House last month to clear the area for a staged photo event by President Donald Trump shortly afterward.

Gregory T. Monahan, acting chief of the Park Police, also denied in testimony to the House Natural Resources Committee that the order to clear the square about a half-hour before Trump’s photo event on June 1 came from the White House, Attorney General William Barr or Interior Secretary David Bernhardt.

He said the ultimate order to abruptly drive protesters from Lafayette Square came from a Park Police incident commander whom he did not immediately identify.

The demonstrations outside the White House came at the height of this year’s nationwide protests over the killing of black people at the hands of police. Democrats charged that the action at Lafayette Square, long one of the nation’s most prominent venues for demonstrations, was a “test run” for ongoing use of federal forces against protesters in Portland and elsewhere.

“We did not clear that park for a photo op,” Monahan said, under questioning. “There is 100 percent, zero correlation between our operation and the president’s visit.”

But Monahan also acknowledged under questioning from Democratic lawmakers that there was no recording of police radio traffic at the time. He said that was a mistake.

Rock- and brick-throwing and other assaults by protesters on Park Police in previous days warranted the violent clearing of the square, Monahan said. But he disclosed that the only injury to his force that day was a punch to the face that occurred as officers were routing the public from the square.

Law enforcement and security officers that night clubbed and punched protesters and used mounted officers and chemical agents against them in one of the most controversial confrontations at the height of this year’s nationwide protests after the death of George Floyd in Minnesota.

The forceful clearing of Lafayette Square came just before Trump appeared in the area without notice, on his way to stage a photo event in front of a historic church nearby. Trump briefly raised a Bible in the air in front of nearby St. John’s Church, in an appearance underscoring his law and order stance on the protests, and returned to the White House.

Rep. Ruben Gallego, an Arizona Democrat and former Marine, said he saw nothing that justified the sudden brute force against what appeared to be a largely peaceful crowd in Lafayette Square at that time.

“Your decision process should have been based by what was” happening in the square at the time, Gallego said, after lawmakers watched a video of Park Police with batons advancing on protesters, who were retreating with their hands up. “No one was injured, by the way, until you all advanced. If I had acted that way when I was in the Marine Corps, I probably would have been busted down a couple of ranks.”

Rep. Jody Hice, a Georgia Republican, called the committee’s probe of the clearing of the square “an act of political theater” by Democrats. “That somehow the U.S. Park Police attacked peaceful protesters is ludicrous,” Hice said.

The National Guard officer is expected to invoke the Military Whistleblower Protection Act, which in part says that no one can block a member of the armed forces from lawful communications with Congress.

Committee Chairman Raul Grijalva, an Arizona Democrat, said Monday that from DeMarco’s written testimony, “it’s pretty obvious that at the highest levels the calls were being made,” although the testimony does not give any explicit details of anyone giving orders. The Justice Department did not immediately respond to requests for comment.

Videos and the accounts of journalists and protesters who were present that night depict the crowd as largely peaceful before the rout.

Monahan and the Trump administration also said plans to build a fence to block protesters from the square was another factor leading authorities to clear the area.

The administration has previously denied that law enforcement and security forces cleared the square to make way for Trump’s appearance before news cameras.

In his written testimony, DeMarco said the episode started shortly after Barr and Gen. Mark Milley, chairman of the Joint Chiefs of Staff, appeared in the square, where Barr appeared to confer with Park Police leaders.

“From what I could observe, the demonstrators were behaving peacefully,” when Park Police, the Secret Service and other, unidentified forces turned on the crowd, DeMarco wrote in his testimony.

The legally required warnings to demonstrators before clearing the square shortly after were “barely audible” from his position 20 yards away, DeMarco said. Protesters were gathered still farther away, and gave no sign of hearing the warnings, he said.

Park Police and other officers then began suddenly routing the crowd without warning to National Guard forces present, DeMarco said.