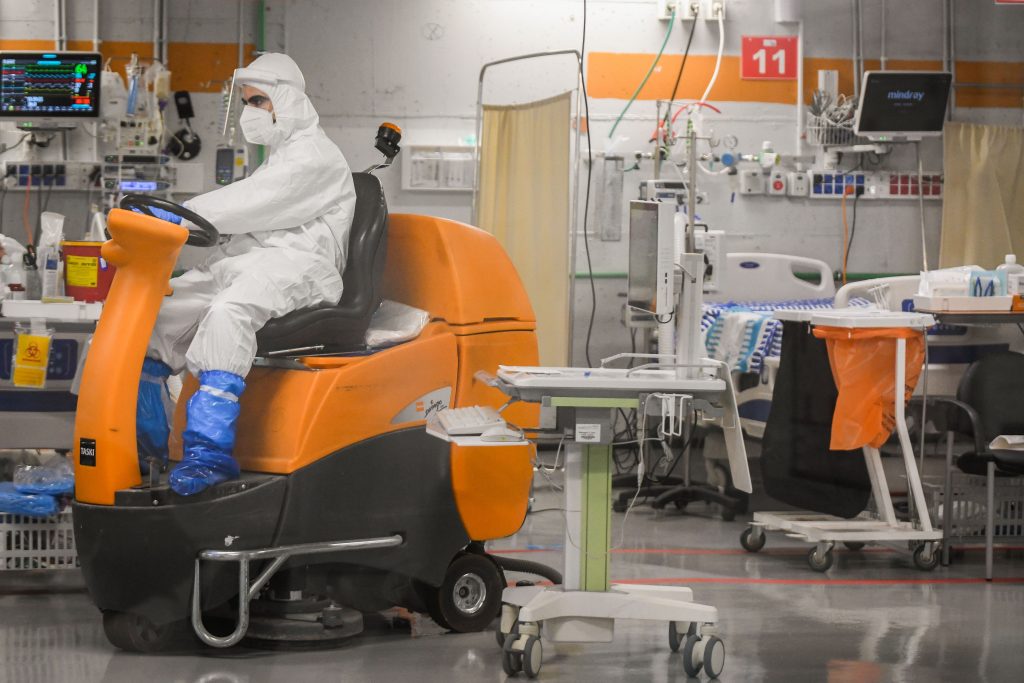 The number of seriously ill coronavirus patients has begun to strain the capacity of Israel’s hospitals, as reflected in Health Ministry data on Monday.

Specially designated coronavirus units at four large hospitals were full, with a fifth nearing capacity, according to the Ministry.

Over 700 COVID-19 patients are currently hospitalized around the country, including 317 listed in serious condition, about one-third of whom are on ventilators.

A general overload was also reported in the hospitals, with two major Yerushalayim medical centers and the largest hospitals in Tel Aviv and nearby Ramat Gan operating near or above full capacity.

Yerushalayim’s Hadassah Hospital Ein Kerem was running at 120 percent capacity while its virus treatment department was at 152% capacity. The city’s Shaarei Tzedek Medical Center was at 104% capacity and the virus department at 106%, the ministry said.

“What we see right now is the consequences of what happened two weeks ago, when the number of infected people was around 2,000 per day,” Dr. Arnon Afek of Sheba told the Jerusalem Post. He said that this week, the small percentage of severe patients is starting to appear in the intensive care unit.

The number of patients on ventilators has not risen as sharply, due to a change in policy.

“Every day we receive 14 new coronavirus patients and release a similar number in order to keep up with the pace,” Prof. Galia Rahav head of the Infectious Disease Unit at the Sheba Medical Center, told Channel 12 news.

“We constantly have to think of new ways to find space for everyone. The feeling is that we are making a mockery of the work,” she said.

Rahav said that although the Health Ministry had changed the definitions of a cured patient, enabling some to be released earlier from quarantine if they have not shown symptoms for several days, there was still “a big mess” on the ground.

“We, as a medical team that cares about public health, do not feel comfortable releasing from quarantine a patient whose test result is positive and may infect others and eventually lead to increased workload in the wards,” she said.

Another person has died, taking the death toll to 474.

According to Channel 12, the lower numbers were due to three factors: proximity to the weekend, when fewer tests are conducted in general; cessation of testing of asymptomatic people, unless they exposed to a known patient; and a directive that self-quarantines end automatically after 10 days, lifting the requirement of two negative tests before release.

Gamzu said it would consist of health experts including Professor Barbash, Professor Nadav Davidovitch, Dr. Hagai Levine, and others.